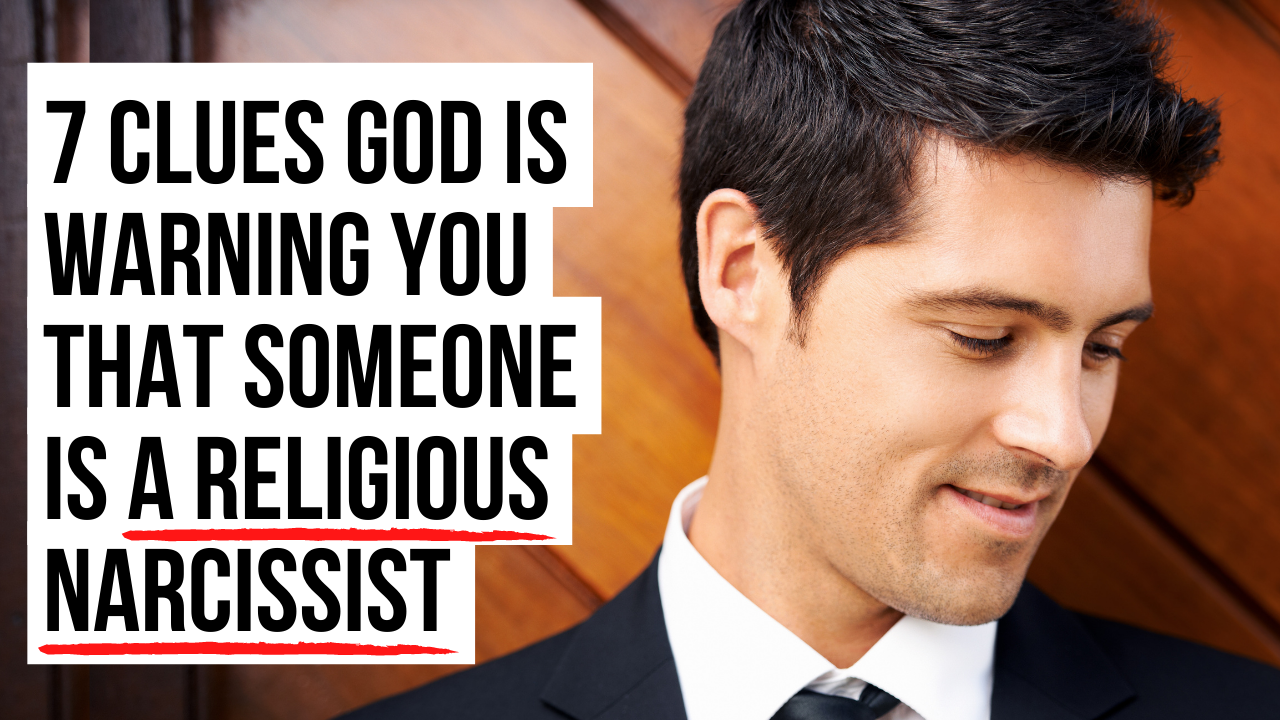 A “narcissistic personality disorder” is a term used in psychology to identify a particular mental health condition that is marked by symptoms such as an overblown sense of one’s own importance, an extreme need for continual praise by others, and a lack of the ability to empathize with others.1

While this term is not a biblical term, the Bible does talk a lot about the sins of selfishness, pride, and self-exaltation. We all struggle with these types of sins in some way or the other, but when I use the phrase “religious narcissist,” I’m talking about those people who are extreme in this area and have learned to use religious practices to feed their narcissistic cravings.

So here are 7 signs to look out for so you can guard against those religious narcissists creeping through the churches.

1. A Religious Narcissist Can Never Do Any Good Deed Without Using It for Self-Exaltation

In one sense, God wants the world to see our good deeds. As Jesus said in Matthew 5:16, “In the same way, let your light shine before others, so that they may see your good works and give glory to your Father who is in heaven.”

But in the following chapter, Jesus then points out that sin is always there to twist everything good, even good deeds meant to be done for God’s glory. Jesus warned:

Matthew 6:2, “Thus, when you give to the needy, sound no trumpet before you, as the hypocrites do in the synagogues and in the streets, that they may be praised by others. Truly, I say to you, they have received their reward.”

Matthew 6:5, “And when you pray, you must not be like the hypocrites. For they love to stand and pray in the synagogues and at the street corners, that they may be seen by others. Truly, I say to you, they have received their reward.”

Matthew 6:16, “And when you fast, do not look gloomy like the hypocrites, for they disfigure their faces that their fasting may be seen by others. Truly, I say to you, they have received their reward.”

We all struggle with this type of thing in some way or the other. But a true religious narcissist will be completely unable to ever do anything good without letting other people know about it. They will not just let their lights shine while they seek to glorify God. They will use religious works to bring glory to themselves. And if they cannot use their service to exalt themselves, they simply won’t serve privately. The only times they ever serve is if it benefits themselves somehow.

2. A Religious Narcissist Reverses the Biblical Order of Importance and Acts Like a Vine Rather Than a Branch

John 15:5, “I am the vine; you are the branches. Whoever abides in me and I in him, he it is that bears much fruit, for apart from me you can do nothing.”

John 15:8, “By this my Father is glorified, that you bear much fruit and so prove to be my disciples.”

John 15:12-13, “This is my commandment, that you love one another as I have loved you. Greater love has no one than this, that someone lay down his life for his friends.”

A religious narcissist reverses everything Jesus said here. They believe that they themselves are the source of meaning; so if God is real and good that means he will abide in the narcissist and do what the narcissist wants. The narcissist will feel like God is only acting in a loving way when God glorifies the narcissist and thus proves to be a loving God. And instead of trying to glorify God through sacrificially loving other people, a narcissist sees people as necessary sacrifices to be offered on the alter of their own ego.

3. A Religious Narcissist Will Preach the Gospel as a Necessary Step to Get on Stage

When a narcissist walks into a crowded room, their natural instinct is to position themselves in the most visible place. When you are in a sanctuary or an auditorium, naturally this is the stage. When a narcissist sits in the congregation and then watches a preacher get on stage to speak to all the people, they start calculating the necessary steps they need to take to get on stage themselves.

They then realize that the only way the church will let them on stage is if they preach the truth, or something sounding like the truth to that church. They quickly realize that if they want Christians to feed their ego, they will have to preach something resembling the gospel. Sometimes a narcissist can even preach the gospel correctly even though they are doing this with false motives. For as Paul said in Philippians 1:15-18, which states:

Some indeed preach Christ from envy and rivalry, but others from good will. The latter do it out of love, knowing that I am put here for the defense of the gospel. The former proclaim Christ out of selfish ambition, not sincerely but thinking to afflict me in my imprisonment. What then? Only that in every way, whether in pretense or in truth, Christ is proclaimed, and in that I rejoice.”

The point is, a narcissist will proclaim Christ as a way of gaining praise for themselves.

4. A Religious Narcissist Tries to Follow the Letter of the Law Rather Than the Spirit of the Law So that They May Boast in Their Flesh

It is those who want to make a good showing in the flesh who would force you to be circumcised, and only in order that they may not be persecuted for the cross of Christ. For even those who are circumcised do not themselves keep the law, but they desire to have you circumcised that they may boast in your flesh. But far be it from me to boast except in the cross of our Lord Jesus Christ, by which the world has been crucified to me, and I to the world. For neither circumcision counts for anything, nor uncircumcision, but a new creation.”

Circumcision was used as a ceremonial sign of God’s covenant with his people. But this physical act was simply pointing to a greater spiritual truth found in the gospel. Through the gospel of Christ, the sinful flesh is removed from our hearts so that we can be a new creation in Christ. But a religious narcissist clings to the letter of the law because then they can get praise from others for their religious obedience. We are called to be obedient, but not to attain something but rather because we have already attained everything in Christ. As Romans 2:28-29 also teaches:

For no one is a Jew who is merely one outwardly, nor is circumcision outward and physical. But a Jew is one inwardly, and circumcision is a matter of the heart, by the Spirit, not by the letter. His praise is not from man but from God.”

5. A Religious Narcissist Tries to Turn Christianity Into a Game Where There Are Winners and Losers

Narcissists are always looking for a scoreboard because they need some way to let everyone know that they are winning and everyone else is losing. So a religious narcissist sees Christianity like a sport where everyone is scoring goals and getting scored on. They use God’s commands like the rules to a game and they believe that whoever portrays themselves as the most obedient is the winner.

But the true gospel calls Christians not to serve out of envy and rivalry but out of humility and self-sacrifice through the power of Christ. God does not save us based upon our abilities and social standing but because of Christ alone. The world is always jockeying for social position in the game of life, but God has called us to live differently. 1 Corinthians 1:28-31 states:

God chose what is low and despised in the world, even things that are not, to bring to nothing things that are, so that no human being might boast in the presence of God. And because of him you are in Christ Jesus, who became to us wisdom from God, righteousness and sanctification and redemption, so that, as it is written, ‘Let the one who boasts, boast in the Lord.’”

6. A Religious Narcissist Wants to Be a Leader for Social and Monetary Gain

Narcissist love power, therefore narcissist always love money too because in the eyes of the world money is power.

This is why the church attracts covert narcissists; they see the church as an easy path to power over people and easy money. This is why 1 Peter 5:1-3 warns:

So I exhort the elders among you, as a fellow elder and a witness of the sufferings of Christ, as well as a partaker in the glory that is going to be revealed: shepherd the flock of God that is among you, exercising oversight, not under compulsion, but willingly, as God would have you; not for shameful gain, but eagerly; not domineering over those in your charge, but being examples to the flock.”

Religious narcissists love power and love money and thus they love to weasel their way into the church to exploit her for selfish gain. If someone is a lover of money, they are not fit to be a leader in the church (1 Timothy 3:3).

7. A Religious Narcissist Will Have the Opposite Mindset of Jesus Christ

There’s so much more that could be said; but essentially, a religious narcissist will be marked by possessing the opposite mindset of Jesus Christ. Philippians 2:4-11 explains:

Let each of you look not only to his own interests, but also to the interests of others. Have this mind among yourselves, which is yours in Christ Jesus, who, though he was in the form of God, did not count equality with God a thing to be grasped, but emptied himself, by taking the form of a servant, being born in the likeness of men. And being found in human form, he humbled himself by becoming obedient to the point of death, even death on a cross. Therefore God has highly exalted him and bestowed on him the name that is above every name, so that at the name of Jesus every knee should bow, in heaven and on earth and under the earth, and every tongue confess that Jesus Christ is Lord, to the glory of God the Father.”