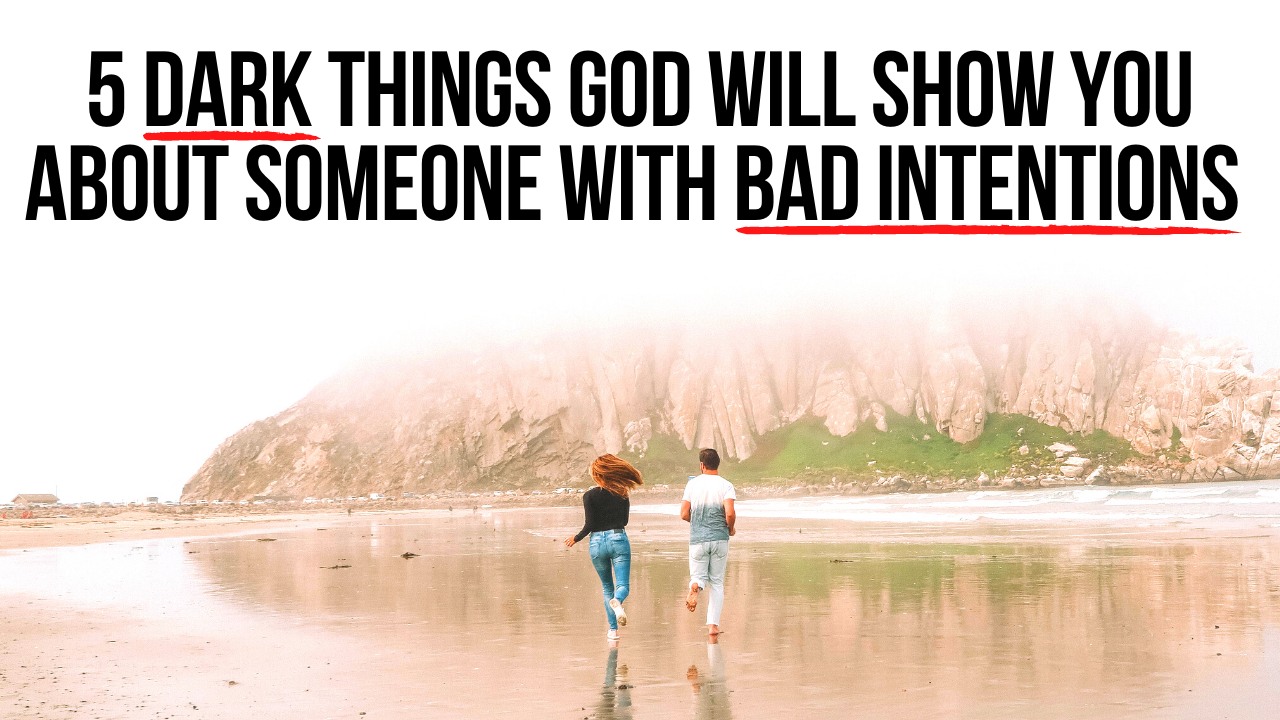 Only God can truly know what is going on in someone’s heart. We are not called to judge people’s motives and internal condition, but throughout Scripture we are warned to have discernment and to observe negative traits in people’s lives so we can avoid getting hurt or tempted by them.

So here are 5 dark things God will often show you about someone when this person has bad intentions for you.

1. If God Is Exposing Someone’s Impulsive Personality Traits, This Is Often a Sign God Is Warning You About This Person’s Bad Intentions for You

It’s easy to believe that humans can segment the different parts of their life, meaning that it’s possible for the sins in one area of someone’s life to not creep over and negatively infect the other areas of their life. This is not possible though.

It’s very dangerous to think that someone who lives impulsively will be able to live wisely in their relationship with you. Humans are not able to contain sin to just one part of their life. Sin is like a fire that jumps from tree to tree until finally the whole forest is on fire. Don’t let someone deceive you. If they act impulsively in every other area of their life, it is impossible for them to then all of sudden show self-control when dealing with you.

As 2 Timothy 3:13 says, “. . . evil people and impostors will go on from bad to worse, deceiving and being deceived.”

2. If God Is Showing You That This Person Has Lots of Hatred for People in His or Her Past, This Is Often a Sign This Person Also Has Bad Intentions for You

Many times the reason someone gets so mad at people in their past is because those people did not do what they wanted. When a selfish person does not get what they want from someone, they get mad and hateful towards that person. It’s always a bad sign when someone is bitter and hateful towards anyone, but when someone has a lot of resentment towards a lot of people, this means that this person has a trend of using people for selfish reasons.

As Proverbs 14:17 states, “A man of quick temper acts foolishly, and a man of evil devices is hated.”

3. If This Person Only Gets Excited About You When They Feel Like You Can Do Something for Them, This Is a Sign They Have Bad Intentions for You

In John 6:1-15, Jesus fed the five thousand. Many people who ate that earthly bread then started following Jesus. But in John 6:27 Jesus said to them, “Truly, truly, I say to you, you are seeking me, not because you saw signs, but because you ate your fill of the loaves.” Jesus then told them that he did not come to just give them earthly bread, but he came to offer himself as the true bread of life (John 6:53-58). When the people realized Jesus was offering himself rather than material blessings, in John 6:66 it states, “After this many of his disciples turned back and no longer walked with him.”

When we apply these principles to our question at hand, you will know someone has a hidden motive when their happiness is connected to something you can offer rather than their actual relationship with you. Just like the crowd that was following Jesus not because they loved him but because they wanted more miracles from him, those who want to be with you only for what you can provide them will leave you as soon as you no longer give them what they want. A person with bad intentions doesn’t love you. They just love what you can give them.

4. When Someone Is Acting in a Tempting Way (Often Sexually), This Is a Sign They Have Bad Intentions for You

While the sin nature in us can be aroused by the sin nature in someone else, you have to remember that if someone is tempting you, they are doing this out of a spirit of hate and not love. This is especially true when someone is tempting you sexually. You can be tempted to give in because sex can make you feel loved for a moment; but be assured, someone who tempts you sexually will quickly reveal their true intentions towards you and show you hate, not true love.

This can be seen in how Potiphar’s wife treated Joseph. She was trying to tempt him to have sex with her, as Genesis 39:10 states, “And as she spoke to Joseph day after day, he would not listen to her, to lie beside her or to be with her.” Her motives were not based in love, which can be seen in what happens next. When Joseph denied her, her true hateful intentions came out and she accused him of violating her which he obviously did not do as Genesis 39:11-18 explains.

5. If Someone Is Playing Manipulative Head Games with You to Keep You Guessing, This Is a Sign God Is Showing You They Have Bad Intentions

It’s easier to get knocked down when you are already off balance. Players and manipulators know this, which is why they try to keep you constantly guessing about their feelings towards you.

One minute it seems like they really want to be with you in a committed relationship, and the next day it feels like they have forgotten you exist. This is done intentionally because people like this know that if they can keep you off balance it will be much easier to finally knock you down when they make their final strike.