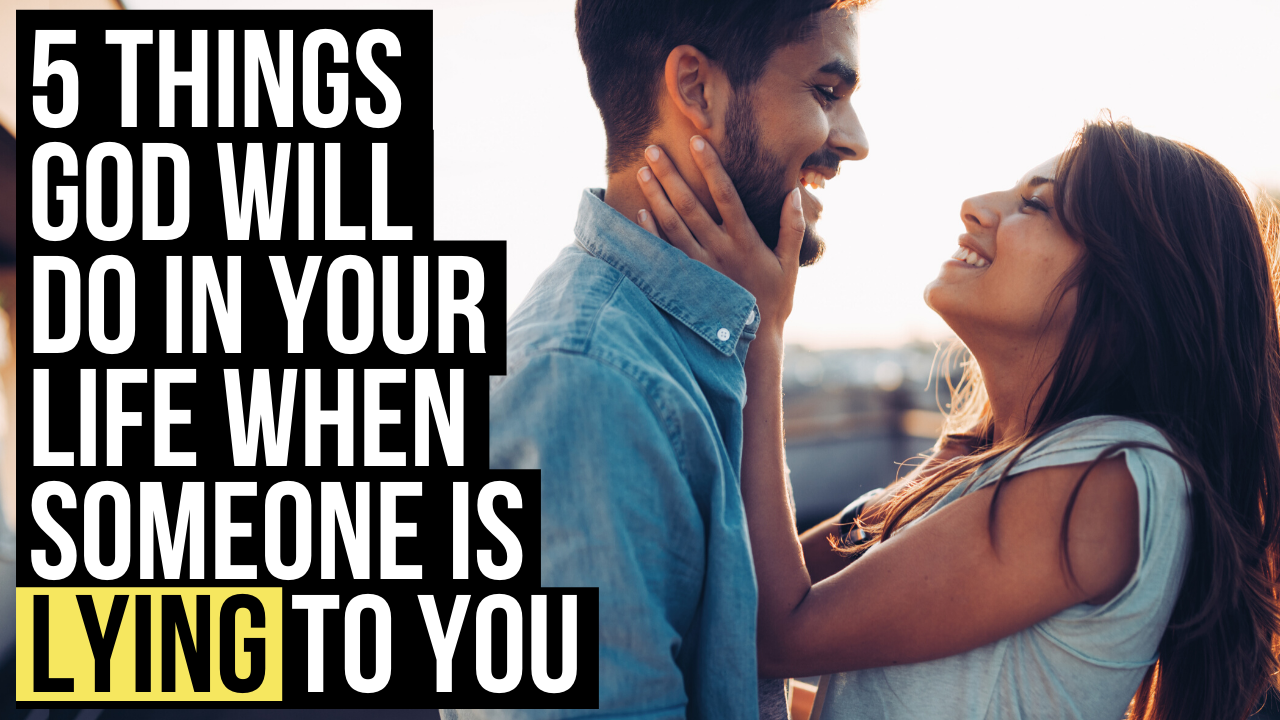 Here are 5 things God will often show you when he is exposing a liar to you.

1. If God Is Showing You that Someone Consistently Manipulates Half-Truths to Support Their Own Agenda, This Is a Sign God Is Exposing a Liar to You

Untrustworthy people love to live in the grey. They know if they just tell a bold-face lie that has zero factual elements of truth to it, it is highly unlikely that they will be able to manipulate anyone into believing them. Therefore, most liars learn to incorporate some truths in the webs they weave.

They then use these stories filled with half-truths to manipulate the facts in the ways that most benefit them. A cheater will admit they saw their ex at the party, but they will deny that anything happened. A thief will admit that he took some money, but he will claim he was only borrowing it and was going to pay it back as soon as he got paid next week. A pastor will admit that he knew about the abusive behavior of one of his staff, but he will deny that he knew the full extent of it.

This is what happened with Ananias and Sapphira. They sold some land and they did actually give a generous gift to the church, but they presented the money to the church as though they were giving all the proceeds from their land when in fact they kept back some for themselves. Acts 5:1-5 states:

But a man named Ananias, with his wife Sapphira, sold a piece of property, and with his wife’s knowledge he kept back for himself some of the proceeds and brought only a part of it and laid it at the apostles’ feet. But Peter said, ‘Ananias, why has Satan filled your heart to lie to the Holy Spirit and to keep back for yourself part of the proceeds of the land? While it remained unsold, did it not remain your own? And after it was sold, was it not at your disposal? Why is it that you have contrived this deed in your heart? You have not lied to man but to God.’ When Ananias heard these words, he fell down and breathed his last. And great fear came upon all who heard of it.”

The Holy Spirit did not judge them for keeping a part of the money for themselves. He judged them for presenting it as though they were giving all the money to the church when in fact they were not. Likewise, God will expose the half-truths of liars in your life too.

2. If God Has Already Exposed This Person as a Liar Through the Authority of Someone Else, This Is Often God’s Warning to You as Well

One really bad trend among many Christians is that we are quick to believe the story of the person we hear first. It’s all too common to meet some pastor who was removed from leadership at a different church but who claims that church mistreated him. And since you are only hearing his side of the story, it is very easy to just believe him. Years later, however, you will often learn the hard way that this man was removed from leadership for a good reason and is now simply repeating his former ways in your church too.

Or perhaps you start dating someone that has a reputation of being a player. You decide to only listen to this person and since they are rather convincing and seem like a very honest person, you believe them. But then as time goes on you see this person really is just a player like all your friends were trying to tell you.

Proverbs 19:5 states, “A false witness will not go unpunished, and he who breathes out lies will not escape.” If someone has a history of getting disciplined and rebuked wherever they go, you should not be so quick to just believe their side of the story. Some punishment is just. And if someone has experienced lots of punishment by others in their life, oftentimes that means they did something to deserve it.

The point is, oftentimes God exposes someone as a liar through some other authority but we believe we are the only authority to be respected and thus we feel we must retry this person’s case ourselves; but we then do so with only the facts this person provides. I’m not saying that every church is right and every individual defending themselves against that church is wrong. I’m not saying that everyone who has a reputation of being a player is a player. I’m just saying that all too often God has already had someone else do the hard work of exposing a liar. Sometimes we just need to listen so we don’t have to learn this truth about this liar the hard way ourselves.

For example, when talking about certain officials in society, Romans 13:4 states, “For he is the servant of God, an avenger who carries out God’s wrath on the wrongdoer.” Yes, people abuse the power God gives them to enforce justice. But not always. Sometimes those who are trying to tell you about someone’s dangerous character are telling you the truth.

3. If God Is Showing You that Someone Is Believing Their Own Lies About Themselves, This Is a Sign God Is Warning You to Avoid This Untrustworthy Person

One of the scariest parts about people who are deeply dishonest is that eventually they start believing themselves. Some liars are so convincing when they speak because they have been lying so long they have chosen to segment their conscience to believe they are not actually lying. Deep down they know but it’s actually possible for the human mind to have so many hidden rooms that the person avoids within themselves, they can actually start to live without the guilt they should have from lying to everyone so much.

The reason this happens is because the human conscience will harden the more you deny it. This is why dark sins always get darker, abusive people always get more abusive, and liars just keep lying more and more. The more you sin the easier it becomes. In Romans 1 Paul talks about how humans indulged in all kinds of evils. Rather than convicting these people more and more through the conscience, God actually does the opposite. One consequence of not repenting of sin is that you are given over to even more sin, which only further destroys you. In Romans 1:28 it states, “And since they did not see fit to acknowledge God, God gave them up to a debased mind to do what ought not to be done.”

So if you see someone who is so lost in their lies they’ve begone to believe them themselves, this is a sign God is exposing a liar to you.

4. If You Notice Someone Who Makes Promises They Can’t Keep, This Is a Sign God Is Showing You a Liar

In past articles, I’ve talked a lot about how one of the best ways to see if someone is truthful or not is simply by comparing their words to their actions. If someone’s words don’t match their actions, basically they are a liar. The same is true when it comes to making promises.

Promises are powerful because they make us give something now in hopes of receiving something later. God’s promises, for example, are so helpful to study in the Bible because he is faithful to fulfill them all and when we hold onto his promises it can give us motivation to obey him in our lives right now. Well, liars seek to control people through misusing this principle. They will promise you something good later if you just do what they say now. We all know what happens next. You do what they want but then they leave you and break their promise.

This happens in relationships all the time. A boyfriend or girlfriend will make a promise about their future devotion to manipulate this person into doing what they want now. But again, once they get what they want they vanish. Proverbs 25:13-14 (NIV) states:

Like a snow-cooled drink at harvest time is a trustworthy messenger to the one who sends him; he refreshes the spirit of his master. Like clouds and wind without rain is one who boasts of gifts never given.”

If someone is constantly making promises to you about the future, expecting you to give something to them in the present, that is a very manipulative thing to do and not a sign of trustworthiness. A trustworthy person does the opposite. Unlike a rain cloud that never rains, a trustworthy person delivers on what they say they will do. They don’t withhold their end of the deal until you give them your end. Rather, they do what they say before expecting you do what they want.

5. If Someone Claims That They Are Right and God Is Wrong, This Person Is a Liar

The constant pattern of sinful people throughout history is to call right wrong and wrong right. Sinful people feel God’s displeasure with their sin, but rather then repent and depend on God’s grace in Jesus, which is the way God wants them to deal with this guilt, they try to avoid the shame they feel by claiming their sin is not wrong and God’s commands are actually the thing that are wrong.

Rather than admitting they have sinned, they instead claim God’s laws are evil, too harsh, and judgmental. 1 John 1:10 states, “If we say we have not sinned, we make him a liar, and his word is not in us.”

When people claim they are right and God is wrong, they are liars. If there is someone in your life that is running from God, be careful, because they are running for a reason. I’m not saying not to love that person or serve that person. I’m just saying be careful who you trust.