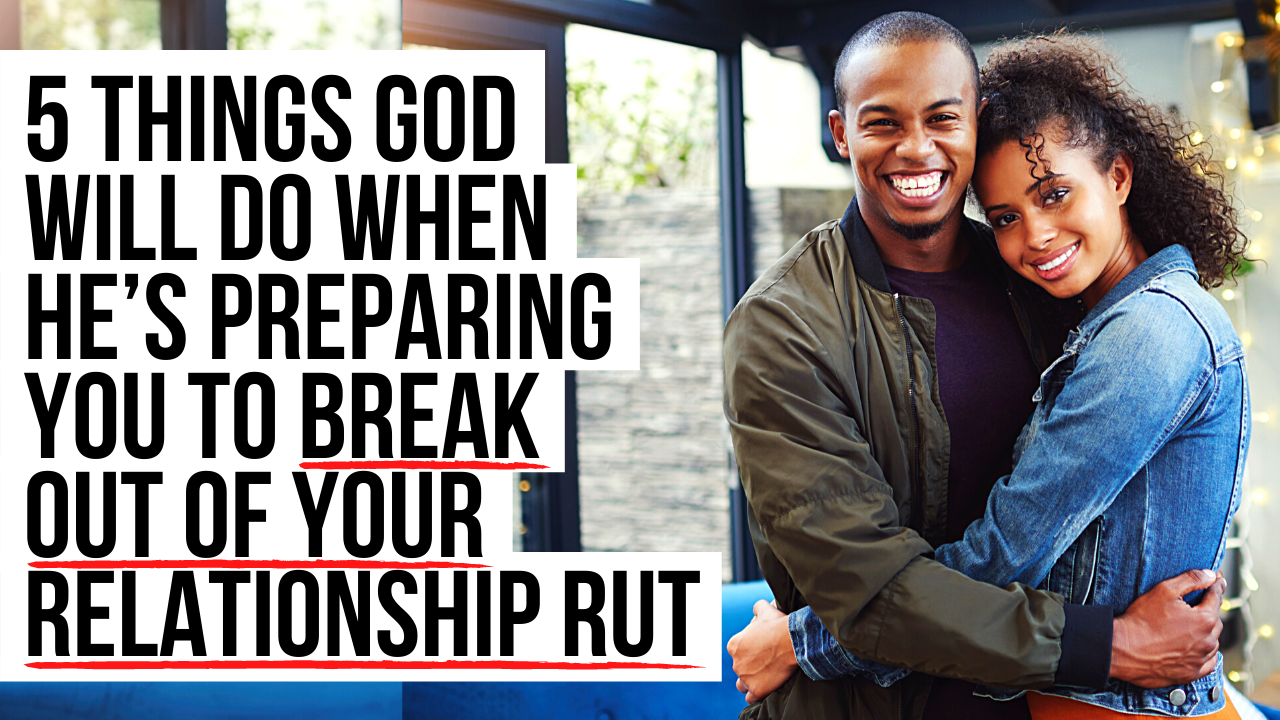 Whatever the negative trend is, here are 5 things God will often do to help you break out of a relationship rut.

1. God Will Prepare You to Break Out of Your Relationship Rut By Helping You Accept the True Desires He Has Placed in Your Heart

What I mean is that many people struggle to be honest about the true desires God has placed on their hearts for a relationship. Some people have been wounded and thus they become fiercely independent. They lie to themselves and say things like, “I don’t need anyone. I’m a loner.” Or, “I want a relationship but I don’t need a Christian spouse. I’m more open minded than that and can love anyone.” Or, “I do want to be married but I know I’m not good enough for a godly spouse.”

The types of lies are endless. But the point is, if you want to get out of a relationship rut, you have to be honest about the desires God has put on your heart for a spouse. It’s not a sign of weakness to want to be married. Wanting a spouse is not a sign you are discontent with God. Wanting someone to depend on does not mean you lack strength.

Notice what Proverbs 31:10-11 states, “An excellent wife who can find? She is far more precious than jewels. The heart of her husband trusts in her, and he will have no lack of gain.” It’s not a sin to want someone you can trust in your heart.

Marriage can certainly become an idol but marriage itself is a good thing created by God. He is the one who puts the desire for marriage in people. He made some people to thrive in singleness. But most Christians were designed to depend on a spouse in certain areas of their heart in a healthy, responsible way. And that’s okay.

Be honest with yourself. If you want to be married, embrace this truth and ask God what steps he wants you to take to receive this blessing from him.

2. God Will Prepare You to Break Out of Your Relationship Rut By Helping You to Reject Lies from Past Relationship Trauma

Sometimes a relationship rut is not because of denial but rather because of a false belief formed in a moment of pain. Trauma is so damaging not only because of the initial pain caused by the first blow but also because of the issues that get buried under the scar tissue.

When physical trauma is done to the body, things need to be set right before the body starts healing over all the issues. Likewise, if you get wounded in your heart and you agree with certain lies about yourself, and then your heart starts to try to move on even though you did not reject those lies you believed, you will often subconsciously start living out of that lie you believed even if you don’t consciously think of it very often.

For example, if someone dumped you who you really liked, you could believe the lie, “I’m worthless and unlovable.” You may not say that to yourself every day, but if you believed that in your heart and then you started to move on in life, that lie will still be there, manipulating you from the shadows. Or if you had a cruel parent who said unloving things to you as a child, even though you are an adult now and don’t think about those cruel words all the time, those lies you believed as a kid can shape the way you live your life as an adult.

As John 8:31-32 says, “So Jesus said to the Jews who had believed him, ‘If you abide in my word, you are truly my disciples, and you will know the truth, and the truth will set you free.’” Don’t believe the false words of people who said hurtful things to you. You have to believe what the word of God says about you since you are now in Christ.

If you are in a relationship rut, it could be because you are living from a lie and it is shaping the way you operate towards the opposite sex in a negative way.

3. God Will Lead You to Break Out of Your Relationship Rut By Preparing You to Look for Someone New Even When You Are Still Thinking About Someone from Your Past

It’s logical to assume you need to wait for your feelings before you decide to start looking for a new relationship. None of us would want to be in a relationship with someone else who is still thinking about their ex or about someone they wanted to be with from their past.

What I am saying is that oftentimes our feelings follow our actions. It’s kind of like forgiving someone. You may never feel like forgiving someone. But God commands us to do it. But what’s really amazing is that oftentimes after we make the choice to forgive someone even when we don’t feel like it, the feelings of forgivingness come later. After we chose to forgive, the animosity and desires for revenge begin to vanish. But if we wait until we feel like it, we might never forgive anyone.

Likewise, the act of being open to a new relationship is often what will start the ball rolling with your feelings. Sometimes you need to logically accept that you have grieved long enough and now it’s time to start trying to meet someone new. And then when you make that choice because you know in your mind it is the right thing to do, then your heart will also start feeling ready to move forward too.

I love the advice Paul gave Timothy in 2 Timothy 2:15, “Do your best to present yourself to God as one approved, a worker who has no need to be ashamed, rightly handling the word of truth.” “Do your best . . . .” That’s so helpful to me. Things aren’t always going to be neat and clean. You won’t always feel exactly how you are supposed to feel all the time. But God still calls us to “do your best” as we seek to follow his leading in our lives.

4. God Will Lead You to Break Out of Your Relationship Rut By Teaching You to Give Less Power Over Your Happiness and Identity to the Opposite Sex

Some Christian singles take relationships too seriously, they put too much pressure on relationships, and they get so caught up in their own feelings they get frozen in fear. Sometimes people get stuck in a relationship rut because they are taking everything so seriously too early in the relationship process and then they become paralyzed.

Yes, relationships can get serious. Marriage is a big deal to God. But when you are single and nothing serious is happening between you and someone, the best approach is just to relax and hold it loosely. Be willing to accept that something could happen between you and that person you like but it’s also possible something might not happen. Either way, you will be okay if you are rooted in God’s love for you.

Soak in the eternal truth that God alone can bring us the security we need in this life. Like 1 John 3:1 states, “See what kind of love the Father has given to us, that we should be called children of God; and so we are.”

5. God Will Prepare You to Break Out of Your Relationship Rut By Getting You Engaged in a Christian Community of Like Minded People

Sometimes we are our own worst enemy when it comes to finding a healthy relationship. None of us can see the world perfectly. We need each other to get different perspectives and to broaden our viewpoints on limiting beliefs.

Romance with someone from the opposite sex is just one kind of relationship. But there are many others God wants us to have so we can be healthy and well-rounded people.  As 1 Timothy 5:1-2 says, “Do not rebuke an older man but encourage him as you would a father, younger men as brothers, older women as mothers, younger women as sisters, in all purity.” God wants us to have all kinds of other relationships with Christians of varying ages and genders.

Oftentimes God will prepare you to get out of your relationship rut by blessing you with non-romantic relationships that are a safe place to heal and grow in the ways you need to before you can thrive in romance one day.