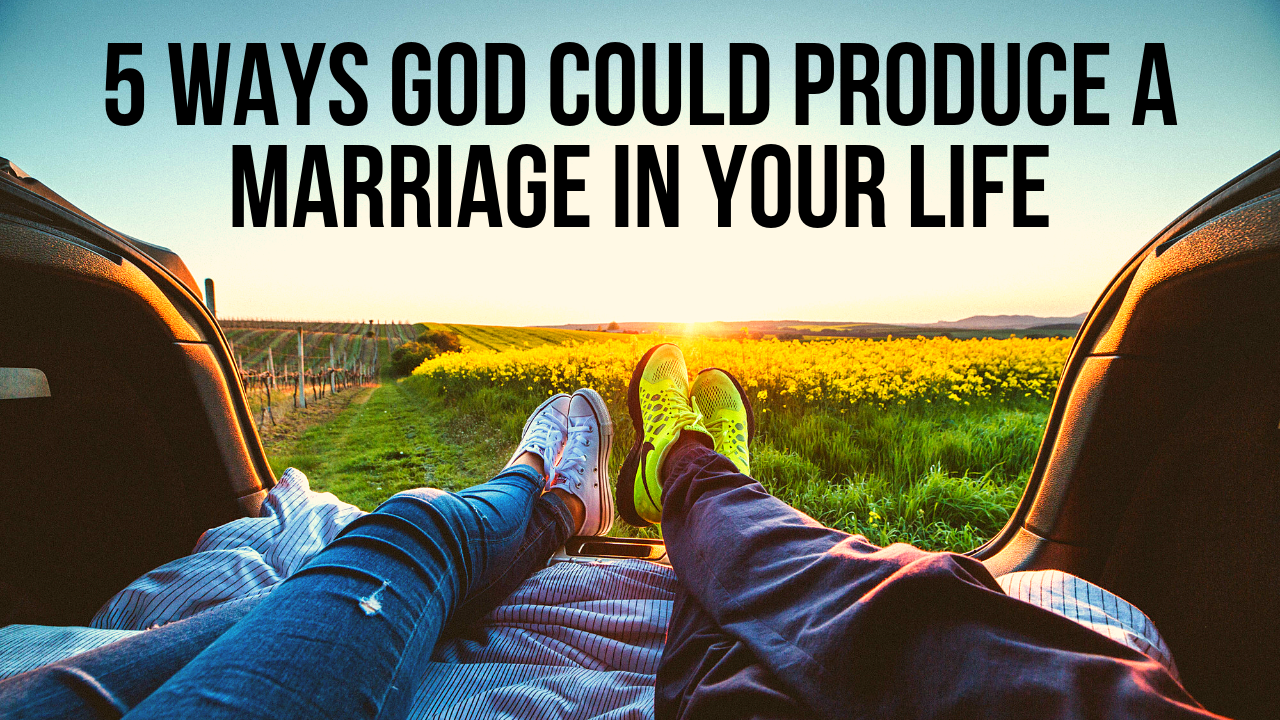 Here are 5 common ways God could cause a marriage to occur in your life.

The more you know who you are and what you believe, the easier it will be to find someone who aligns with you.

You will be unable to obey the command in 2 Corinthians 6:14 to be equally yoked if you don’t first understand what your core beliefs actually are. When you know what you believe and why you believe it, it will be much easier to find someone who you are equally yoked with.

One of the reasons marriage can seem so impossible in singleness is because we often look past the steps that normally lead to marriage.

When you stand at the base of huge mountain and look at its highest peak, it can seem impossible to go from the bottom to the top. But when you stop looking at the very top and you start looking for the next path, the next steady foothold, the next place to put your hand as you begin to climb – suddenly you will begin to make progress up that huge mountain. You don’t go from the base of a mountain to the top in one huge leap. You make slow but steady progress as you put one foot in front of the other over and over again.

Likewise, this is how God normally takes his children from singleness into marriage. It’s not one huge leaping bound to the top. Marriages are formed in people’s lives when they begin to take small steps of faith over and over again. And one of the first steps God often has people take before he will produce a romantic relationship in someone’s life is increasing their friendships first.

Friendship is one of the most common starting points for all romantic relationships. The more friendships we have in life, the more likely one of those relationships will blossom into something more.

Don’t get me wrong, you can’t make friends just to try to date everyone. You have to truly make friends for friendship’s sake. Even if you never date someone, you can still show them the love of Christ as the man or woman of God you are. But nonetheless, God often plants relationship seeds that grows into a marriage through new friendships in your life.

2 Corinthians 9:6 states, “The point is this: whoever sows sparingly will also reap sparingly, and whoever sows bountifully will also reap bountifully.” In context this verse is about giving and being generous to those in need. But I do think there is a principle here that also relates to life in a more general way. Life is full of sowing and reaping, planting and harvesting, causes and effects. The same is true in relationships. When you invest in people’s lives and stretch yourself relationally, you are planting seeds that will often grow into something much bigger than you ever thought possible.

3. God Often Shines a New Light on an Old Friend

Another common way that God produces marriages in his people’s lives is by helping them see an old friend in a new way. One of the benefits of having friends you truly have no romantic interest in is that your friendship can grow with less pressure. You won’t need to fight having hidden motives and all that extra pressure when you know you like someone even though you are just friends right now but you wish you were something more.

You certainly can’t make yourself like someone who you just don’t like that way, but it is wise to be open to something changing in the future if God causes it. Sometimes God will give you a new set of eyes to see someone differently than you saw them in the past.

4. God Often Produces a Marriage When a Man Pursues and a Woman Invites

Every marriage has a unique relationship backstory. However, when Christians are following the Bible and truly seeking to submit to God, usually relationships are formed when men and women do certain things that God designed them to do.

As I have studied Scripture and observed the way men and women actually are in reality, it seems clear to me that God designed men to pursue women. I think among Christians that is a pretty accepted belief. While a man’s pursuit is crucial for relationships to begin, I think one biblical principle that is not nearly as emphasized in the church is the need for a woman to be inviting.

While it is the man’s responsibility to pursue, this does not mean the woman is a damsel in distress and can only wait for the guy to do everything. A woman must be an active participant and initiator just like the man, but the way she does this will look differently. I’m not saying I think a woman should pursue a man, but she can be inviting towards him which will complement his pursuit of her.

This is a huge topic that goes beyond the intent of this article, so here are some more resources if you want to dive more deeply into this topic of men pursuing and women being inviting.

Should a Christian Woman Pursue a Man?

How to Pursue a Christian Woman

How to Let a Christian Guy Know that You Are Interested

5. God Often Produces a Marriage Once Someone Becomes Content in Christ During Singleness

There’s no spiritual formula’s with God. God has a will for each of our lives and we can’t tell God exactly what to do and when to do it. So we must be careful that we don’t think if we act a certain way it will be like punching in a secret code that unlocks the marriage blessing we are after.

However, it is also wise to study what God normally does, and oftentimes God waits until people are content without something before he gives it to them. God often waits for this contentment to grow in us so once he does give us that blessing we will not smother it and idolize it.

When you can truly say that you are content in Christ during your season of singleness, oftentimes this is like opening your hands upwards to God so he can freely bless you. Being content in singleness does not mean that you forsake your desire for marriage and pretend you don’t want to be married. The goal is not to let go of your desire for marriage. The goal, rather, is to find your ultimate joy in Christ no matter what is or is not happening in your earthly life as Philippians 4:4 instructs.

When you are truly content in Christ deep in your heart, you will be prepared to glorify God in singleness or marriage. And while a Christian marriage is a big blessing from God, the greatest blessing from God is when we are free to live for his glory at all times. As Colossians 3:17 states, “And whatever you do, in word or deed, do everything in the name of the Lord Jesus, giving thanks to God the Father through him.”