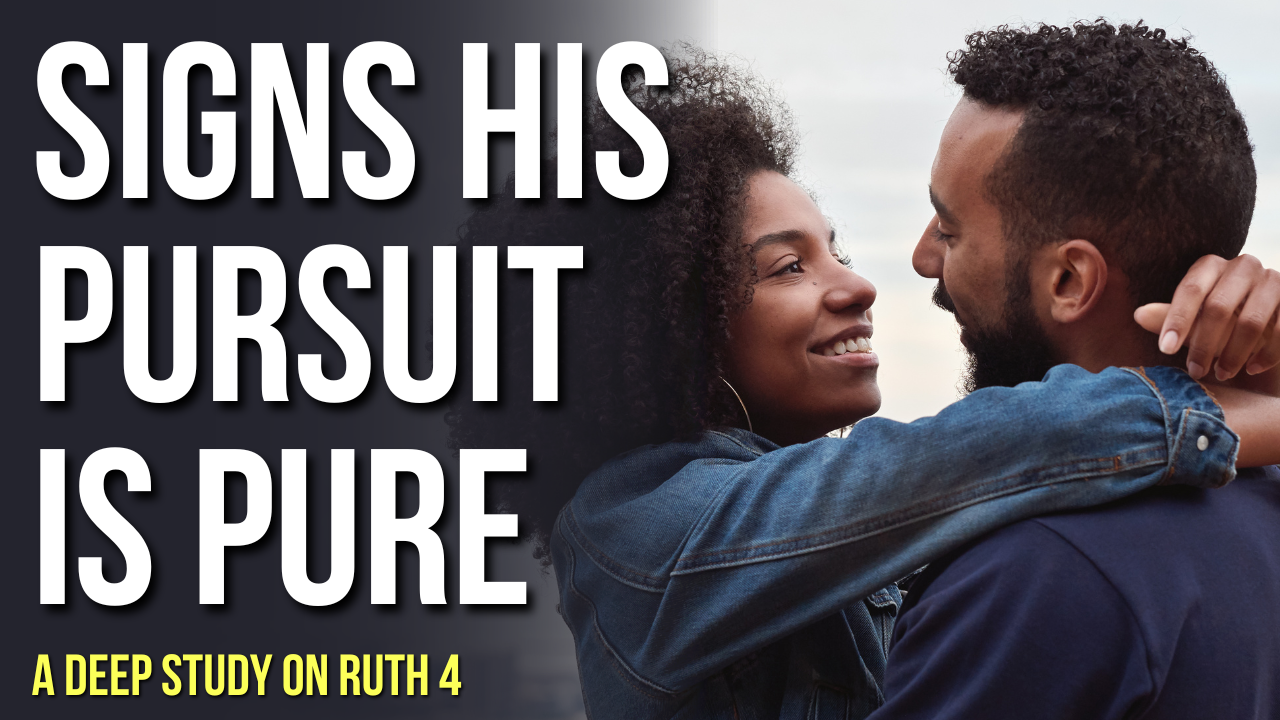 By studying Ruth 4, we can discover at least 5 biblical steps a godly man takes when he’s pursuing a woman.

And if you are Christian man or woman who is single right now but you also want to do what you can to prepare for a godly marriage one day, then I wanted to let you know I just opened enrollment for AGW University.

This will be the last time I offer the scholarship along with these courses this year. I designed these relationship training courses specifically for people who have been enjoying these articles but also know they need to go deeper with the Lord.

So if you are a single man or woman who wants to glorify God in marriage one day, feel free to click here to learn more about AGW University before the 11/21/22 deadline passes by.

Ruth 4:1-6, “Now Boaz had gone up to the gate and sat down there. And behold, the redeemer, of whom Boaz had spoken, came by. So Boaz said, ‘Turn aside, friend; sit down here.’ And he turned aside and sat down. And he took ten men of the elders of the city and said, ‘Sit down here.’ So they sat down. Then he said to the redeemer, ‘Naomi, who has come back from the country of Moab, is selling the parcel of land that belonged to our relative Elimelech. So I thought I would tell you of it and say, “Buy it in the presence of those sitting here and in the presence of the elders of my people.” If you will redeem it, redeem it. But if you will not, tell me, that I may know, for there is no one besides you to redeem it, and I come after you.’ And he said, ‘I will redeem it.’ Then Boaz said, ‘The day you buy the field from the hand of Naomi, you also acquire Ruth the Moabite, the widow of the dead, in order to perpetuate the name of the dead in his inheritance.’ Then the redeemer said, ‘I cannot redeem it for myself, lest I impair my own inheritance. Take my right of redemption yourself, for I cannot redeem it.’”

Principle: A godly man pursues a woman without violating the Scriptures.

It would have been so easy for Boaz to just skip this process and take Ruth for himself without consulting anyone. But there was a legal process at this time for the Jews, and Boaz was careful to obey this process.

Likewise, a godly man is always going to be concerned with the Scriptures. God made each of us differently. So a man will pursue a woman in a way that is true of his personality. God does not require each man to pursue a woman in the exact same way.

However, in Scripture, God has given us laws that act like guardrails. Guardrails don’t control the way you drive. Rather, they help you not fly off the road and into a ditch. Likewise, the Bible does not require all men to pursue women by doing the same things as each other. But we all should be obeying the commands in the Bible and avoiding sin.

Ruth 4:7-12, “Now this was the custom in former times in Israel concerning redeeming and exchanging: to confirm a transaction, the one drew off his sandal and gave it to the other, and this was the manner of attesting in Israel. So when the redeemer said to Boaz, ‘Buy it for yourself,’ he drew off his sandal. Then Boaz said to the elders and all the people, ‘You are witnesses this day that I have bought from the hand of Naomi all that belonged to Elimelech and all that belonged to Chilion and to Mahlon. Also Ruth the Moabite, the widow of Mahlon, I have bought to be my wife, to perpetuate the name of the dead in his inheritance, that the name of the dead may not be cut off from among his brothers and from the gate of his native place. You are witnesses this day.’ Then all the people who were at the gate and the elders said, ‘We are witnesses. May the Lord make the woman, who is coming into your house, like Rachel and Leah, who together built up the house of Israel. May you act worthily in Ephrathah and be renowned in Bethlehem, and may your house be like the house of Perez, whom Tamar bore to Judah, because of the offspring that the Lord will give you by this young woman.’”

Principle: A godly man pursues a woman in public, not private.

Private pursuit is not a biblical pursuit. Again, the Scriptures don’t require all men to pursue women in one narrow fashion. Rather, there are general principles and guidelines each guy should be following. And one biblical principle that relates to a man pursuing a woman is that sin happens in the dark. 1 John 1:6-7 states:

A man who pursues a woman in private but not in public has bad intentions. He usually just wants sex. Once he gets it, he stops pursuing. He won’t make his pursuit public because this then prevents him from pursuing other women because then these women will see that he’s already pursuing you.

When a man is serious about pursuing you and he has godly intentions, he will pursue you publicly, wanting others to see it.

Ruth 4:13, “So Boaz took Ruth, and she became his wife. And he went in to her, and the Lord gave her conception, and she bore a son.”

Principle: A godly man commits in marriage before having sex with the woman.

Yes, most men are not willing to wait to have sex. But as much as Christian women complain about how hard it is to find a man who want to wait to have sex, this issue is just as relevant for women too. Women and men are both having premarital sex and there are very few women who are willing to obey God’s command in this area too.

So yes, a godly man will be eager to resist sexual sin and will only try to have sex after marriage, not before (1 Thessalonians 4:3-5). But a man who is living by this standard is going to want the woman he pursues to also be living by this standard. Therefore, don’t give into the pressure from worldly guys to have sex and then hope a godly man will come along and pursue you. If you want a godly man who is trying to honor the Lord with his sexuality, you will attract him by living with the same intent as him when it comes to your sexuality.

Ruth 4:14-17, “Then the women said to Naomi, ‘Blessed be the Lord, who has not left you this day without a redeemer, and may his name be renowned in Israel! He shall be to you a restorer of life and a nourisher of your old age, for your daughter-in-law who loves you, who is more to you than seven sons, has given birth to him.’ Then Naomi took the child and laid him on her lap and became his nurse. And the women of the neighborhood gave him a name, saying, ‘A son has been born to Naomi.’ They named him Obed. He was the father of Jesse, the father of David.”

Principle: A godly man brings glory to God through his treatment of the woman he pursues.

When the women started praising God for the good that occurred to Naomi and Ruth, Boaz didn’t interject, “Um, excuse me. God didn’t do that. I did this!” No, Boaz was a man who was eager to bring glory to God.

A godly man will not seek to glorify God so that God will then give him a woman. Rather, everything this man does will be motivated by his desire to bring glory to God. So instead of glorifying God so God will give him a woman, this man will pursue a woman as a way of bringing glory to God. He will seek to find a woman he can love so he can reflect how Christ loves the church (Ephesians 5:21-33).

Of course no man is perfect as we all are sinful (Romans 3:23), so I’m not saying a godly man will do this perfectly. But overall, a godly man will be focused on bringing glory to God, including when pursuing a woman.

Principle: A godly man pursues a woman with his legacy for the Lord in mind.

I’m not talking about a worldly, egotistical legacy. I’m talking about leaving a biblical legacy behind. When a godly man pursues a woman, provides for her, has children with her, and then leaves an inheritance (both financial and spiritual) for his descendants (Proverbs 13:22), God keeps using this man for his glory even after this man has died and gone to heaven.

Worldly men are focused on this life and this life alone. A godly man will pursue a woman because he knows together they can create something bigger than themselves for the glory of God and by his grace.

And as I mentioned at the beginning of this article, I’m currently offering a huge scholarship for anyone who enrolls in AGW University before the 11/21/22 deadline. I designed these courses to help Christian singles meet, date, and marry the person God has for them. If you want to prepare well for the future marriage God has for you, click here to learn more. 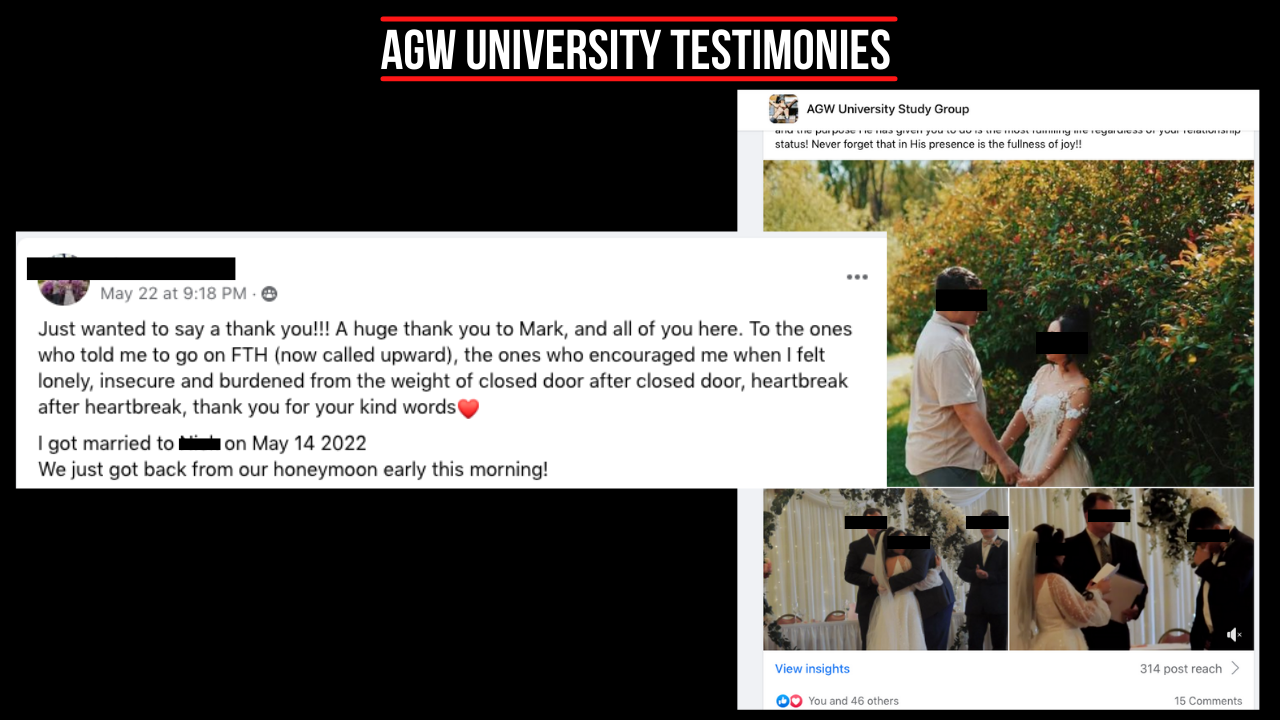