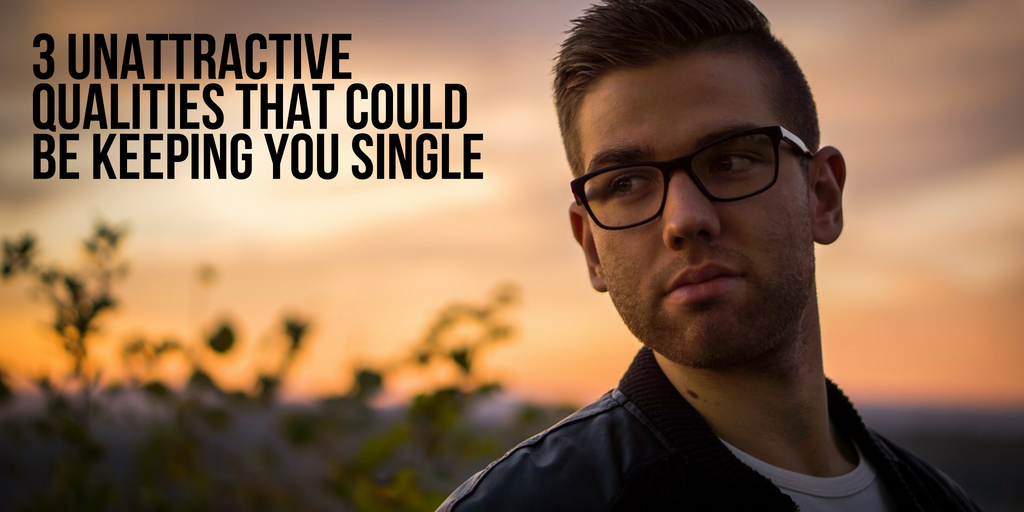 If you are a Christian who wants to be married, it can be confusing on why you remain single despite your best efforts. Sometimes there is no good reason other than it’s just not your time. However, sometimes we are doing things to sabotage the process of meeting someone by making ourselves unattractive.

Here are three unattractive qualities that could be keeping you single.

Complaining About the Opposite Sex with Big, Sweeping, Negative Generalizations

As I talk about in the article and video titled 3 Unbiblical Beliefs Keeping You Single, our beliefs directly impact our behaviors. When we have negative beliefs about the opposite gender, this is obviously going to affect our interactions with them.

There’s very few things more unattractive than someone of the opposite sex making a huge generalization about your gender. Whenever I post a video on YouTube about the struggles one gender often experiences, without fail someone from the opposite gender makes some huge, sweeping, bitter statements, “The reason men are single these days is because all women are gold diggers and all they care about is what car you drive.” Or, “The reason women are single these days is because there are no real men who know how to treat a woman anymore.”

Big negative generalizations usually flow from someone’s personal experience with a few individuals. If a guy gets rejected by a girl because he doesn’t make enough money, that is usually the reason that guy now claims all women are gold diggers. If a woman got cheated on by one or two guys, that’s usually the reason she now feels all males lack self-control. Certainly some women are gold diggers and some men are cheaters, but it is completely false to make such an outrageous generalization.

When we don’t forgive and find healing to our individual wounds, we wind up seeing everything with tainted vision. If you are someone who is bitter towards the opposite sex and feels “all” women or men are the same, you will always be single. This is very unattractive.

As I talk about in the article and video titled 8 Types of People to Avoid in Friendship, Dating, and Marriage, Proverbs 26:11-13 warns us about those people who always have an excuse:

When someone has an excuse for everything, there is no reasoning with them. While we certainly don’t want to be too quick to label someone with a “victim mentality” since there is obviously countless cases of true abuse and true victimhood, there are also those who cling to being a victim as their identity.

It is statically impossible to never be the source of any of your own issues. The only person who believes that all the problems in your life are because of other people is you. Everyone else will see that you have a very defensive mentality and are quick to blame others. This mentality is very unattractive and will definitely keep you single.

Imagine a high school student sitting you down in your fifth year of marriage to tell you what you need to do better to have a successful marriage. Imagine a 21-year-old guy who has never babysat a child in his life sitting you and your spouse down to lecture you on how you can parent your three children better. These are extreme examples, but whenever we are preachy, especially when we are preachy about things we have not experienced for ourselves, we end up looking ridiculous.

What I am not saying is that you can never talk about things you haven’t lived. We are all free to share our opinions and offer advice when people want to know something. However, when we have a preachy mentality and when we venture too far off into areas we obviously have no experience with, this is unattractive.

Baggage Will Not Keep You Single. Blaming Others Will

In summary, we all come into relationships with baggage. Most people are willing to work through things with you. I really don’t know of too many people who realistically expect to get into a relationship without any baggage and with someone who has no baggage. We all have something we need to work through.

But what will keep people away is a blaming attitude. People really do get wronged, but when they can’t move on and they just want to stay the victim, they will wear people out. There’s a difference between being hurt and being defensive. People generally have empathy when you are hurting. But when your hurt causes you to be defensive towards people who didn’t hurt you, this will naturally keep people away from you.

If you complain, blame, and accuse others of being the source of your problems, you will remain single because no one will want to be around you. You don’t need to ignore your issues or act like bad things have not happened to you. But you can’t be angry at the world and then expect someone to be attracted to you.

You have to find deep healing through Jesus Christ so people can see the real you.