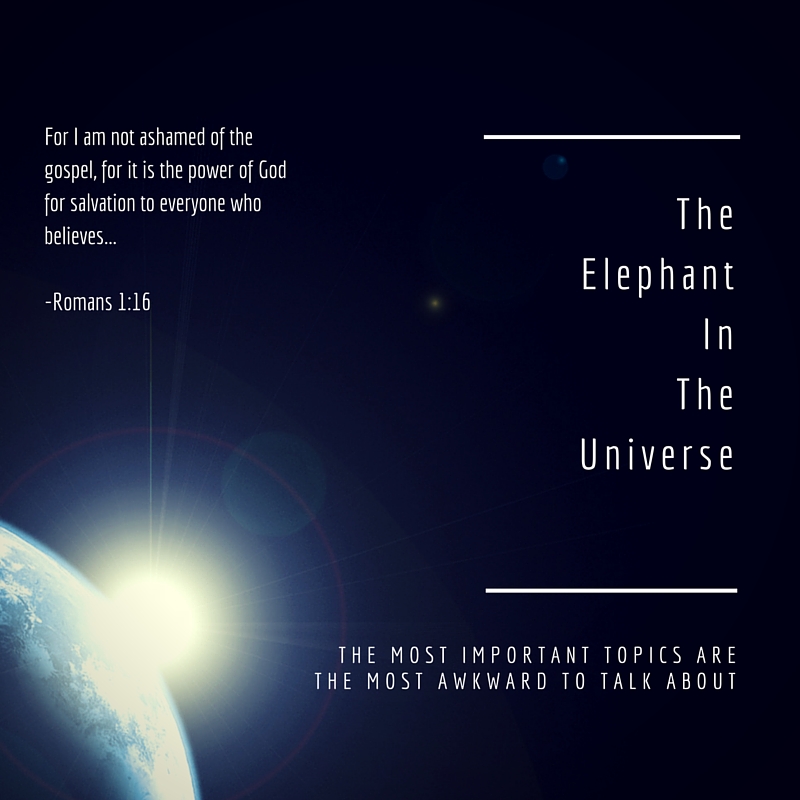 We’ve all felt it. That awkward, somewhat awful, stomach-sickening feeling you get when everyone in the room is thinking the same thing but no one wants to talk about it.

I find that the level of awkwardness that comes with a topic is often equivalent to its importance. People get uneasy when you bring up politics because political views are consequential. Talking about sex is so hard because we all know it is really significant. It’s so difficult for a police officer to knock on a parent’s door to tell them their teenager died in a car accident because this is such a serious situation. It’s far easier to talk about the weather, sports, or what your plans are for the holidays because these are insignificant.

If significance is often accompanied by awkwardness, is it any wonder why even the thought of evangelism produces so much inner turmoil for Christians? Jesus really is the elephant in the universe. We don’t want to talk about him. We’ve been trained it’s not socially acceptable. You may smile, you may smirk, or you may even scowl, but far too few of us are going to actually sit down and talk about him.

But he’s there. Every day, every minute, everywhere we go . . . he’s there, staring believers and unbelievers right in the face. Despite the majority of humanity being unwilling to talk about him, there’s not a day that goes by where we are not forced to look at the created world around us and consequently be confronted with The Elephant in the universe, “For in [the Son] all things were created: things in heaven and on earth, visible and invisible, whether thrones or powers or rulers or authorities; all things have been created through him and for him” (Colossians 1:16).

Why Does Jesus Make Everyone So Awkward?

Everyone knows something happened to get us all here, we all feel something is missing from our basic human experience, and there’s always that nagging void when we’re lying alone in our beds at night. But most of us are not willing to talk about it, especially when it comes to Jesus.

No other name brings with it more uneasy feelings when mentioned, thus the world, rather than talk about why this name makes us feel that way, has decided it’s best to just keep quiet about the whole thing. The world has tried to remove him as much as possible. It will even bear to talk about “God,” but the name of Jesus is another matter.

Jesus makes everyone so awkward and uncomfortable because Jesus is the most important person you could ever tell people about.

Don’t Be Ridiculous . . . Jesus Is Too Important. Evangelize Despite the Awkwardness

Humans love to talk, but the majority of our conversations seem rather ridiculous when you start looking at the context from God’s aerial perspective.
Isn’t it odd how unbelievers –and even believers sometimes– can walk through the woods and admire the changing colors of the leaves, but then get in the car without any acknowledgment that clearly a divine power is at work in this universe? We can look through a telescope and know there is an infinite amount of space no person has ever seen even with our best technology, and yet all we have the courage to talk about is how great it is that such amazing telescopes have been created by humans.

The only thing more unsettling than watching unbelievers deny the fingerprints of God is to watch myself say nothing at all.

Imagine walking into a random hospital room and there you find the nurses chitchatting about how bad the coffee was that morning and how they did nothing fun over the weekend; but while they chat a patient is flailing in bed, gasping for air, with monitors flashing like a tacky Christmas tree. Wouldn’t you be disturbed and confused at how they could talk idly while deliberately turning a blind eye to this person they are supposed to help?

I think Jesus looks at Christians that way as we politely interact with an unbelieving world whose dying right before our eyes, the very people we are to help.

Not Talking About Him Only Makes It More Awkward

The thing about elephants being in the room is that eventually we are forced to confront them. You can deny the awkwardly obvious for a period of time, but not forever.

Eventually that mustard in your friend’s beard is going to be discovered and he’s going to wonder why you didn’t say anything. Eventually your Aunt Sue is going to correct your husband because he’s been continually calling her Aunt Sarah throughout the whole night of the family party, and then on the drive home he’s going be way more upset with you because you didn’t correct him earlier.

Jesus will not be a taboo topic forever. Eventually he’s going to come back, and for those of us who know Jesus really is God, the only Savior of the world, we are going to feel far worse than awkward when we see the masses of people we never told about Jesus.

The weird thing about an elephant in the room is that once you actually bring it up, you look back and wonder why you were so afraid. A big sigh of relief usually comes over the whole room once someone finally steps-up and talks about it compared to others who just sat passively, frozen with politeness.

Once you start a dialogue with the world about Jesus, you’ll realize it’s much less awkward than you thought. Not everyone will receive what you say, but at least you won’t feel so uncomfortable and guilty every time you deny God’s inner nudge to tell someone about Jesus.

The awkwardness is only there because we’re not talking about The Elephant we all know is present.

The Son is the image of the invisible God, the firstborn over all creation. 16 For in him all things were created: things in heaven and on earth, visible and invisible, whether thrones or powers or rulers or authorities; all things have been created through him and for him. 17 He is before all things, and in him all things hold together. 18 And he is the head of the body, the church; he is the beginning and the firstborn from among the dead, so that in everything he might have the supremacy. 19 For God was pleased to have all his fullness dwell in him, 20 and through him to reconcile to himself all things, whether things on earth or things in heaven, by making peace through his blood, shed on the cross.”
-Colossians 1:15-20