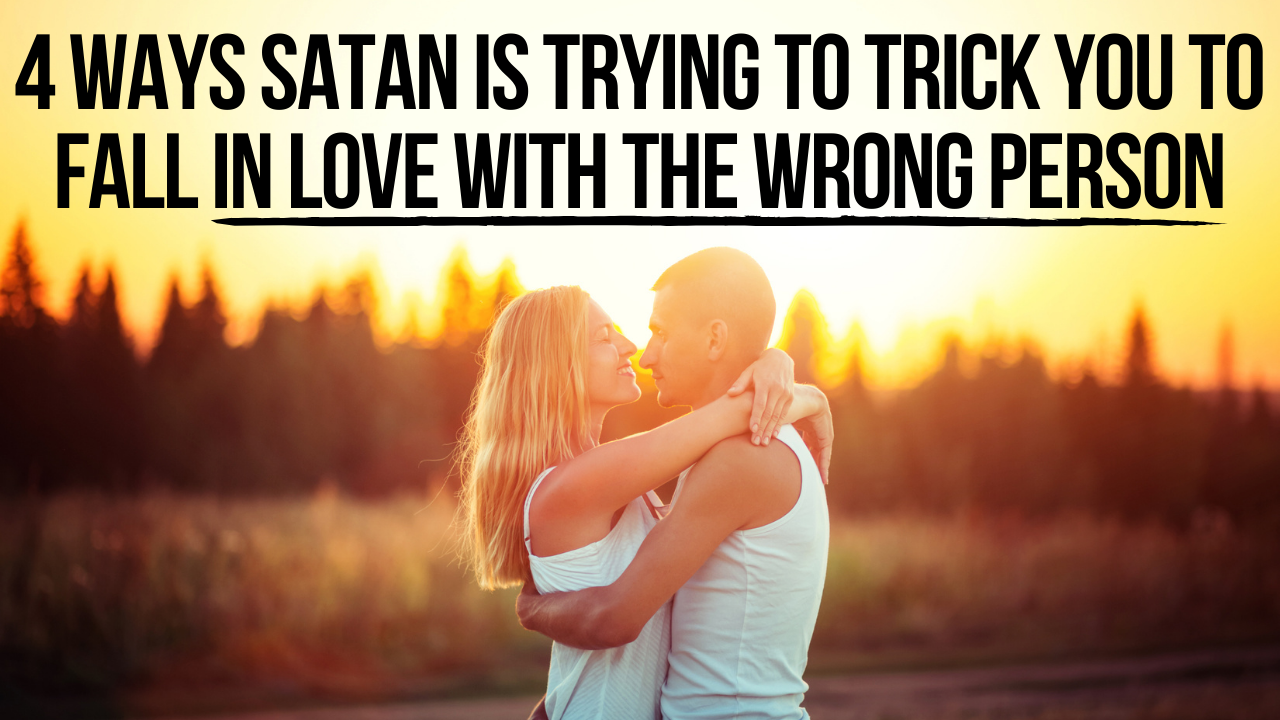 Here are 4 signs that often happen when Satan is tempting a Christian to fall in love with a person God does not want them with.

1. If Satan Is Tempting You to Be Overly Concerned with the Outward Appearance of a Relationship, This Is Often a Sign You Are Being Tempted to Fall in Love with the Wrong Person

Throughout Scripture, there is a clear message that God is not just concerned with the outward appearance of things. God is more concerned with the heart (1 Samuel 16:7). As humans, we often get tempted to reverse this order. We know the heart is important, but we often value the external presentation of a relationship more than the hearts of those involved.

One example that shows the dangers of being blinded by the external appearance of things is found in Joshua 9. God had told Israel to destroy the surrounding nations because they were extremely wicked and God wanted to execute his justice on them. But notice how Israel was deceived to make a covenant with a people God did not want them to make a covenant with. Joshua 9:3-6 says:

But when the inhabitants of Gibeon heard what Joshua had done to Jericho and to Ai, they on their part acted with cunning and went and made ready provisions and took worn-out sacks for their donkeys, and wineskins, worn-out and torn and mended, with worn-out, patched sandals on their feet, and worn-out clothes. And all their provisions were dry and crumbly. And they went to Joshua in the camp at Gilgal and said to him and to the men of Israel, ‘We have come from a distant country, so now make a covenant with us.’”

Just as the Gibeonites tricked Israel by looking a certain way externally, so too will Satan try to trick you by the external appearance of someone God does not want you with. Looking like a godly person is not enough. God cares about the heart.

2. If You Are Tempted to Make a Commitment Towards Someone Without First Seeing Their Character, This Is Often a Sign Satan Is Tempting You to Fall in Love with the Wrong Person

Joshua and the Israelites could have detected the deception of the Gibeonites if they had not been so willing to listen to mere words. Words are important, but character is not revealed through words. Character is revealed through observable actions witnessed over a long period of time. Joshua 9:7-11 states:

But the men of Israel said to the Hivites, ‘Perhaps you live among us; then how can we make a covenant with you?’ They said to Joshua, ‘We are your servants.’ And Joshua said to them, ‘Who are you? And where do you come from?’ They said to him, ‘From a very distant country your servants have come, because of the name of the Lord your God. For we have heard a report of him, and all that he did in Egypt, and all that he did to the two kings of the Amorites who were beyond the Jordan, to Sihon the king of Heshbon, and to Og king of Bashan, who lived in Ashtaroth. So our elders and all the inhabitants of our country said to us, “Take provisions in your hand for the journey and go to meet them and say to them, ‘We are your servants. Come now, make a covenant with us.’””

Likewise, you will often sense that something is off. But then Satan will tempt you to fall in love with someone God does not want you with by tempting you to believe the words of this person with no other evidence. Words are important. But character can’t be revealed through words and empty promises. People can say anything.

So if you want to avoid falling in love with the wrong person, make sure you are witnessing this person’s character over a healthy period of time rather that rushing to believe their well crafted stories of deceit.

3. If You Are Only Using Earthly Wisdom in Deciding What You Should Do, This Is a Sign Satan Is Tempting You to Fall in Love with the Wrong Person

From an earthly perspective, dating and relationships can be a lot like buying a car. You can do everything possible to try and make sure you are buying a good car that will last a long time, but there’s always a risk that the transmission blows up a few months after you buy it. You can take it to your mechanic, you can take it on a test drive, you can buy a good brand, you can spend a lot of money, but beneath the hood there can always be a problem you don’t know about until something bad happens down the line.

Likewise, before you open your heart to someone, there are many wise steps you should take. You should go on some dates, like a test drive. You should bring your friends into the relationship so they can observe this person, like a mechanic who can give you advice. You should date someone who says the right things about God, like buying a good car brand. But in the end, there’s always a risk in relationships that things end very badly. You can do your best, but underneath the hood, in the heart of this person, bad things can always be happening that you just can’t know about.

The only solution is to depend on God. I’m not saying you should just pray. You should do all those wise things before opening your heart to someone. But above all that, you must pray and consult the Lord to get his word on it. Notice how this played out in Joshua 9:12-15, which states:

‘Here is our bread. It was still warm when we took it from our houses as our food for the journey on the day we set out to come to you, but now, behold, it is dry and crumbly. These wineskins were new when we filled them, and behold, they have burst. And these garments and sandals of ours are worn out from the very long journey.’ So the men took some of their provisions, but did not ask counsel from the Lord. And Joshua made peace with them and made a covenant with them, to let them live, and the leaders of the congregation swore to them.”

“So the men took some of their provisions, but did not ask counsel from the Lord.” Wow, how convicting is that? Yes, assess this relationship in wisdom. Use your mind that God gave you to make good decisions. But don’t just rely on yourself.

If you want to avoid falling in love with the wrong person, you need to “ask counsel from the Lord.”

4. Satan Will Tempt You to Fall in Love with the Wrong Person By Tempting You to Rush the Process

Lastly, in wisdom, be patient. One of the easiest ways to fall in love with the wrong person is to rush the process and ignore the precautionary steps you know God is telling you to take before really opening your heart to someone.

Joshua 9:16 states, “At the end of three days after they had made a covenant with them, they heard that they were their neighbors and that they lived among them.” If they would have taken more time and slowed down, they could have avoided this huge mistake.

Likewise, if you want to avoid getting tricked by Satan to fall in love with the wrong person, be patient. Slow down and make sure you are truly following the wise steps God is leading you to take.

But what happens if you have already fallen in love with a person you know God does not want you with? Here is an article I’ve done about unhealthy soul ties and how to break them.