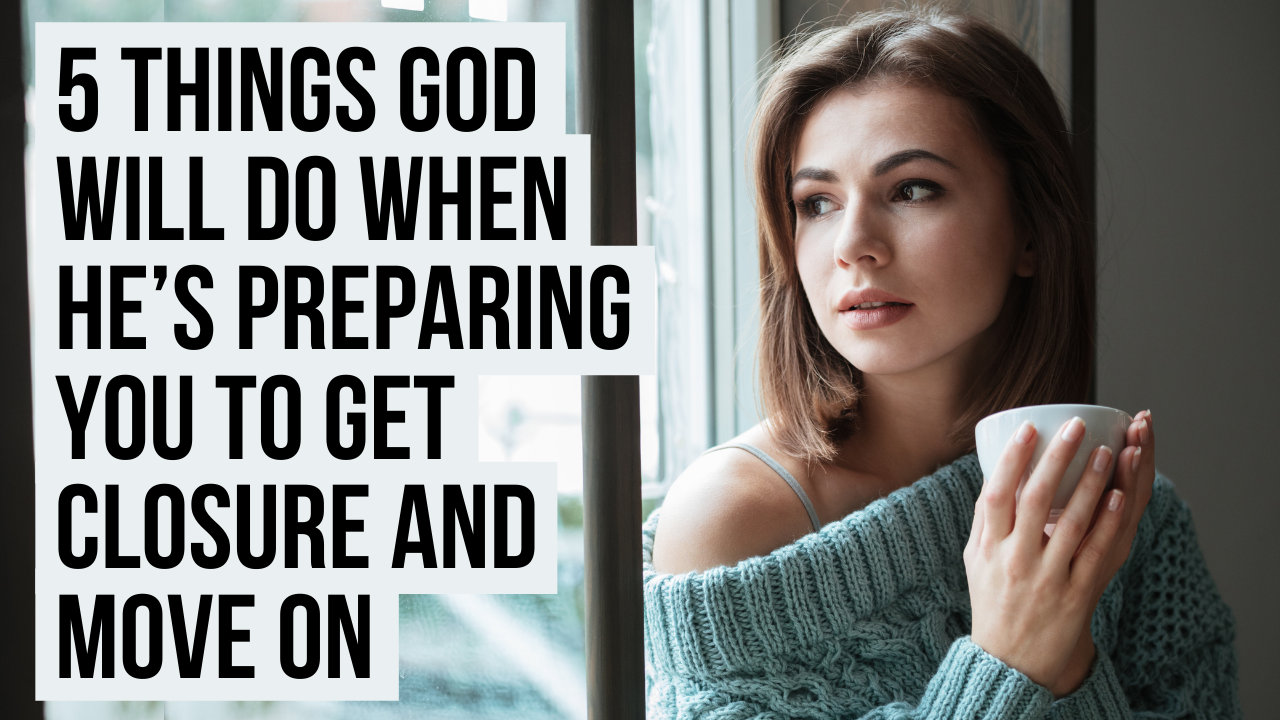 Here are 5 things that will happen in your life when God is preparing you to get closure and move on from someone.

1. God Will Prepare You to Get Closure and Move On From Someone By Helping You Own Your Part in Any Sin That Occurred So You Can Repent and Live Free By God’s Grace

Moving on is a process and there are many layers to this process. If you are struggling to let go of this person, it’s probably not because of just one thing. So I’m not saying that the only reason you may be struggling to move on is because you sinned with this person and now you are attached to them. I’m just saying that this could be one variable that’s adding to the difficulty of moving on.

Whenever there is relationship conflict, it’s extremely rare for it to be completely one person’s fault. Usually what happens is that one person does something worse than the other person, but both people sinned against each other to some degree.

Perhaps one of the worst parts of being sinned against in a really bad way is that it tempts you to be blind to the ways you sinned, even though they weren’t as bad as the way they sinned. If someone cheated on you, that is worse than you speaking disrespectfully to them in the relationship. But if you never repent of those sins which you committed because their more hurtful sins are blinding you to your own issues, you will stay stuck in the past, unable to move on.

Forgiving this person of what they did to you is certainly an important part of moving on. But my guess is that you already know that. What often gets overlooked is our own sins that are holding us back. We are not called to confess the sins of others to God. We are called to confess our own sins to God, “If we confess our sins, he is faithful and just to forgive us our sins and to cleanse us from all unrighteousness” (1 John 1:9).

2. God Will Prepare You to Get Closure and Move On By Allowing You to Try Again So You Can See This Relationship Is Really Not Meant to Be

I believe God often gives us answers to our questions by helping us take a few steps forward which then causes things to happen which will then make God’s will clearer to us. So it’s possible that God literally leads you to try to date someone again so that you can realize this is not going to work and then you can fully move on. But I do think this type of scenario where God would lead you to date this person again is rare. God would only lead you to do this if there was no sin or temptation involved because God does want us to flee temptations that have led us to sin in the past.

In most cases, I believe God simply lets people go back to someone again because God knows if they don’t make this mistake again they will forever be stuck thinking and hoping for this relationship God does not want for them. It’s a little like the prodigal son. The father knew the son was making a mistake by leaving him. But the father let him go so the son could realize this and then return to the father willingly (Luke 15:12-13, 24).

Likewise, God will let you make a bad choice if you are unwilling to follow him forward. Again, I’m not saying that God will lead you to try again with this person if the relationship was bad and hurtful before. I’m just saying that God might allow you to make this mistake again if you need to make this mistake again to finally realize this relationship is not God’s best for you.

3. God Will Prepare You to Get Closure and Move On By Helping You Accept This Person’s Intentional Absence as Their Answer to You

If you and this person ended your relationship in a cordial, respectful manner, it’s possible that God leads you two to talk one last time so you can get closure. Most times, however, this is not the wisest choice. It may feel like you need to say one last thing to them or that you need them to apologize to you about one more thing. But in reality, you don’t.

God’s freedom for you is not based upon the actions of someone else. God can empower you to live free through the actions of Jesus Christ done on our behalf.

Additionally, we also need to accept that everything someone does communicates something. In other words, even though this person is no longer speaking to you, this fact alone is actually telling you something.

If someone wanted to be with you still, they would not be ignoring your calls or treating you like trash. God will help you move on and get closure by helping you accept that this person’s intentional absence is their answer to you. Their absence is them saying they don’t want to be with you and that you should move on.

When you read through 1 Corinthians 13 and begin to understand what true love looks like, you will see that this absent person doesn’t love you. This fact should not lead you to endlessly grieve. Grieve for a season. But see their lack of love as a sign that this is simply not the person God has for you. He has something better for you.

4. God Will Prepare You to Get Closure and Move On From Someone By Helping You Truly Accept You Two Will Never Be Together Again

One reason people struggle to move on is because in their hearts they are clinging to the hope that this person will come back into their life one day. It’s not a sin to have this hope. In extremely rare instances, it has happened. But normally this is not going to happen. Normally, this hope for this person’s return will just keep you stuck and alone, missing the good God does have for you.

To truly move on, eventually you have to fully accept you two will never be together again. You have to completely stop hoping this person enters your life again one day.

Big picture, it comes down to where our deepest hope is. It’s okay to have lesser hopes. But ultimately our hope must be rooted in God or otherwise we will get stuck waiting for earthly things that can’t compare. As Romans 15:13 states, “May the God of hope fill you with all joy and peace in believing, so that by the power of the Holy Spirit you may abound in hope.

5. God Will Prepare You to Get Closure and Move On By Helping You Let Go of the Way You Thought Your Life Was Going to Look

It’s not wrong to imagine what your life was going to look like. We only run into issues when we can’t adapt this image we formed in our minds. Sometimes you can’t let go of someone and move on because they are an integral part of the life you had imagined for yourself.

As Christians, however, we have to hold every aspect of this life on earth loosely. Everything here is subject to change on a moment’s notice. That can cause some people to live in fear. But for Christians, this should cause us to live by faith. As Psalm 39:5-7 states:

Everyone is but a breath, even those who seem secure. ‘Surely everyone goes around like a mere phantom; in vain they rush about, heaping up wealth without knowing whose it will finally be. But now, Lord, what do I look for? My hope is in you.’”

When God reveals that someone is not going to be in your future like you thought, it’s okay to grieve this for a season. But then you have to let it go and accept God’s will for your life. When we cling to an image in our mind of what we thought life was going to look like, we will end up missing the beauty God wants us to experience in reality.