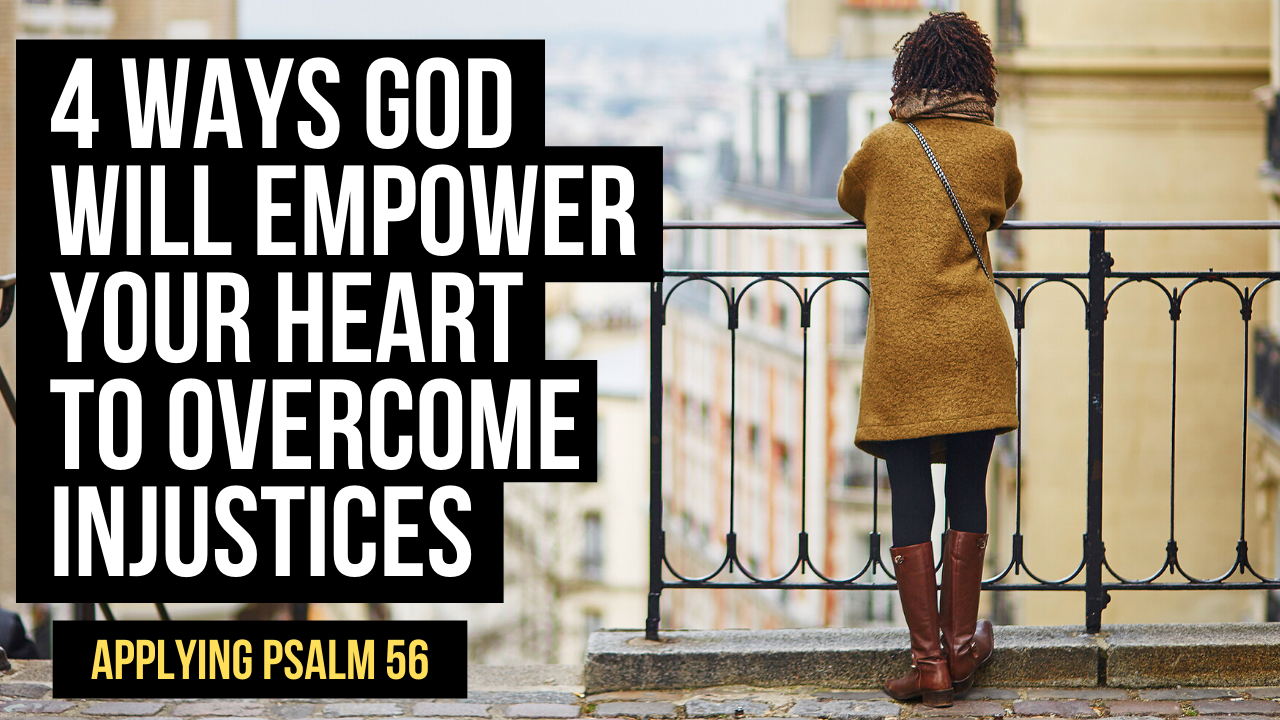 What does the Bible say about fighting injustice? In Psalm 56, David penned a psalm that recounts how he depended on the Lord when he was seized by the Philistines at Gath. Through studying this Bible passage, we can discover at least 4 ways God will empower your heart to overcome injustices done against you.

1. When Evil Attacks You to Make You Afraid, God Will Empower You Through Sparking Trust in Him By His Word

Psalm 56:1-4, “Be gracious to me, O God, for man tramples on me; all day long an attacker oppresses me; my enemies trample on me all day long, for many attack me proudly. When I am afraid, I put my trust in you. In God, whose word I praise, in God I trust; I shall not be afraid. What can flesh do to me?”

When David wrote this psalm, he was not only hated by the Philistines, he was also fleeing from King Saul as well. His own king was attacking him and now a foreign king was against him too. But David was able to overcome his fear by refocusing his attention on the King of kings and the Lord of lords. In 1 Samuel 21:10-13 we are given the backstory to Psalm 56. It states:

And David rose and fled that day from Saul and went to Achish the king of Gath. And the servants of Achish said to him, ‘Is not this David the king of the land? Did they not sing to one another of him in dances, “Saul his struck down his thousands, and David his ten thousands”?’ And David took these words to heart and was much afraid of Achish the king of Gath. So he changed his behavior before them and pretended to be insane in their hands and made marks on the doors of the gate and let his spittle run down his beard.”

Notice it was when David “took these words to heart” that he became afraid of his earthly enemy. While David then came up with a practical plan that actually worked and got him our of trouble, in Psalm 56 we see the spiritual side of things as well. He overcome the fear of this man’s words against him by turning to the word of God. As Psalm 56:4 states, “In God whose word I praise, in God I trust; I shall not be afraid. What can flesh do to me?” It comes down to whose word will you take to heart? The words of your enemy or the word of God?

This is exactly what Jesus said when he taught us how to overcome those who may even try to kill us. In Matthew 10:28 it states, “Do not be afraid of those who kill the body but cannot kill the soul. Rather, be afraid of the One who can destroy both soul and body in hell.” Notice the word “Rather.” You can’t fear God and fear man at the same time. A healthy fear of God will always triumph over an unhealthy fear of man.

So one way God will empower your heart to overcome the fear of man when they speak evil against you is by pointing you to the word of God, which will refocus you on the Lord’s truth rather than allowing yourself to focus on man’s lies.

2. God Will Empower Your Heart By Helping You Validate that Wrongs Were Really Done Against You

Psalm 56:5-7, “All day long they injure my cause; all their thoughts are against me for evil. They stir up strife, they lurk; they watch my steps, as they have waited for my life. For their crime will they escape? In wrath cast down the peoples, O God!”

When abuse and wrongdoings occur against you, it is crucial that you specifically name those wrongdoings and accept that something truly evil did occur against you. Christians are always called to forgive but too often the church is quick to side with the oppressor rather than giving a voice to the victim. You can’t forgive something until you acknowledge an actual wrong was done. You must never allow other people to minimize evil done against you because the minimization of a wrong then minimizes the healing that needs to take place that will empower you to overcome that wrong.

You don’t take an aspirin for cancer and you don’t use chemo therapy for a headache. We must rightly assess each wrong done to us so we can rightly apply the remedy in Christ. David doesn’t minimize the evil done to him. He names it specifically. He wrote it down and made a song about it. They committed a crime against him and thus he calls it what it is. It wasn’t a mistake, an accident, or a lapse in judgment. It was a crime, and David makes sure he attributes “their crime” against them as they rightly deserve.

3. God Will Empower Your Heart to Face the Injustices Done Against You By Reminding You that He Sees Everything, Even When the World Doesn’t Believe You, and He Will Bring Justice Against All Wrongs

Psalm 56:7-11, “For their crime will they escape? In wrath cast down the peoples, O God! You have kept count of my tossings; put my tears in your bottle. Are they not in your book? Then my enemies will turn back in the day when I call. This I know, that God is for me. In God, whose word I praise, in the Lord, whose word I praise, in God I trust; I shall not be afraid. What can man do to me?”

There should be justice on earth. In Romans 13:4, for example, it states that God has put certain people in authority on earth to execute justice, “But if you do wrong, be afraid, for he does not bear the sword in vain. For he is the servant of God, an avenger who carries out God’s wrath on the wrongdoer.”

Sadly, this does not always occur. Sometimes wrongs go unpunished on earth. Sometimes crimes happen in secret. Sometimes those in authority abuse their power. Sometimes the victim is not believed. And sometimes the earthly consequences of the sin against you is not severe enough to bring about proper justice. So how can you deal with this and prevent yourself from becoming bitter and cold hearted?

The key is to remember that while God is a God of love the word also clearly points out that God is also just and wrathful towards evil. As David said in Psalm 56:7, “For their crime will they escape? In wrath cast down the peoples, O God!” Even when the world does not give you the justice you deserve, your hope in God must remain strong because he truly sees everything and will not forget, for “You have kept count of my tossings; put my tears in your bottle. Are they not in your book?”

God sees everything. Nothing will be forgotten. One way or the other, justice will be served, for as 2 Corinthians 5:10 states, “For we must all appear before the judgment seat of Christ, so that each one may receive what is due for what he has done in the body, whether good or evil.”

4. God Will Empower You to Overcome Injustices By Giving You the Strength to Obey God Regardless of What Man Will Do or Not Do

Psalm 56:12-13, “I must perform my vows to you, O God; I will render thank offerings to you. For you have delivered my soul from death, yes, my feet from falling, that I may walk before God in the light of life.”

So one way God will empower you to overcome injustice is by empower you to follow him regardless of what the world is doing around you, for as Joshua said, “But as for me and my house, we will serve the Lord.”