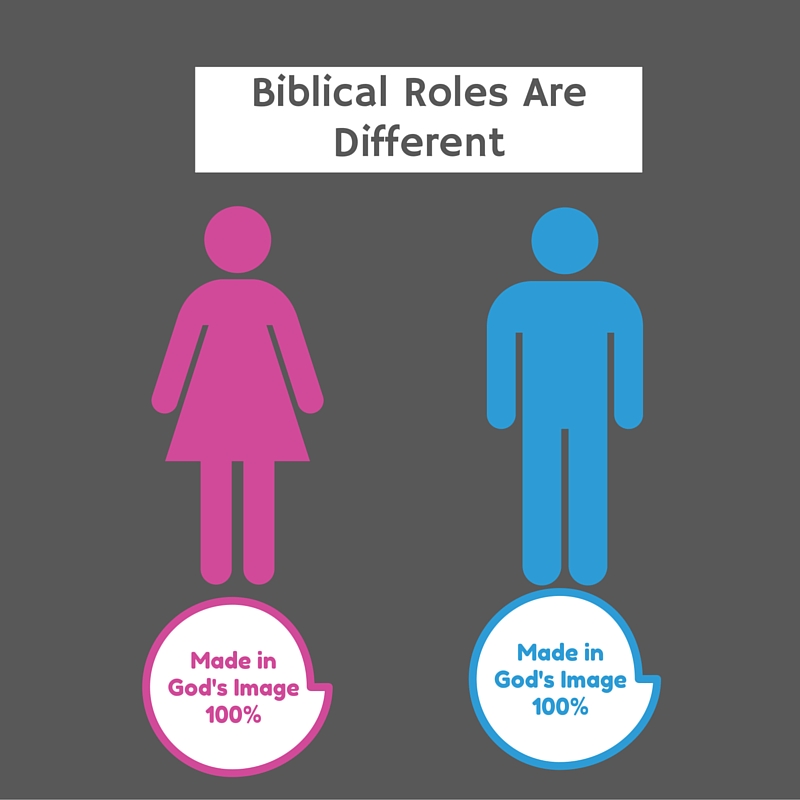 In a day and age where we are told as children that we can be whatever we want if we just try our hardest, to be told God has ordained men to be the spiritual leaders, not women, in the home and church is seen as a crime.

Regardless, the Bible makes clear that Christian men and women are equal and yet are to play different roles in their homes and churches, which is theologically described as complementarianism.

Notice that in Genesis 2:15-18, God gives Adam a command to lead before Eve is even made:

The LORD God took the man and put him in the garden of Eden to work it and keep it. 16 And the LORD God commanded the man, saying, “You may surely eat of every tree of the garden, 17 but of the tree of the knowledge of good and evil you shall not eat, for in the day that you eat of it you shall surely die.”
18 Then the LORD God said, “It is not good that the man should be alone; I will make him a helper fit for him.”

Verse 18 clearly states “Then,” meaning Eve was not yet formed from Adam. Therefore, God obviously expected Adam to lead Eve. He gave Adam the command to teach his whole family because God made Adam the leader.

Notice how Satan usurps God’s design and speaks to Eve rather than Adam. Satan corrupts paradise by getting Adam and Eve to play different roles. Eve begins to lead and Adam begins to follow, and the rest is history (Genesis 3:1-3):

Now the serpent was more crafty than any other beast of the field that the LORD God had made.He said to the woman, “Did God actually say, ‘You shall not eat of any tree in the garden’?” 2 And the woman said to the serpent, “We may eat of the fruit of the trees in the garden, 3 but God said, ‘You shall not eat of the fruit of the tree that is in the midst of the garden, neither shall you touch it, lest you die.’”

Adam’s leadership failed in at least two ways. First, he passively let Eve lead, for Adam was right there with her (Genesis 3:6). Next, he did not help his wife learn God’s words correctly. Whether he quoted God wrong and Eve learned a perverted command which God did not actually say, or whether Adam explained it correctly and Eve just learned it poorly, the fact is that Adam was given the job to transfer truth to his wife and this mission was not accomplished. God did not say what Eve said to Satan. God never said “You shall not eat of the fruit of the tree that is in the midst of the garden, neither shall you touch it, lest you die,” (Genesis 3:3) like Eve said God said.

Eve was tempted by Satan but she fell because she began to focus on what she could not have rather than on what she could have. She started to believe God was holding out, that they were not allowed to eat from any tree in the middle of the garden.

Likewise, Adam and Eve fell because they began to focus not on the roles they could have, but on the roles that were forbidden for them. God never said Eve was less important. He never said her role was less significant. But he did ordain that Adam lead and Eve support his leadership. By rejecting God’s way and choosing their own, sin and great pain occurred.

God does not alter his ways just because humans don’t like them. He judges us on what he has ordained whether we believe it’s right or wrong. Notice that although Eve was the one who was leading when Satan was tempting, God still holds Adam responsible, “And they heard the sound of the LORD God walking in the garden in the cool of the day, and the man and his wife hid themselves from the presence of the LORD God among the trees of the garden. But the LORD God called to the man and said to him, “Where are you?” (Genesis 3:8-9).

Satan first speaks to Eve and God first speaks to Adam. Satan speaks to Eve because he wanted her to lead and Adam to follow. But despite Adam and Eve’s willful role reversal, God still speaks first to Adam because God has ordained males to lead their families, whether they do or not.

Just as their where two trees in the middle of the garden, only one of which would bring life, God has presented us with two trees to eat from (obedience and disobedience), but only one produces life.

God made male and female in his image. Both display the glory of God. Without one the other is incomplete. Therefore when men do not act as the spiritual leaders and women do not support that leadership, they eat the wrong fruit, and the fall that occurred through Adam and Eve happens all over again in our individual lives.