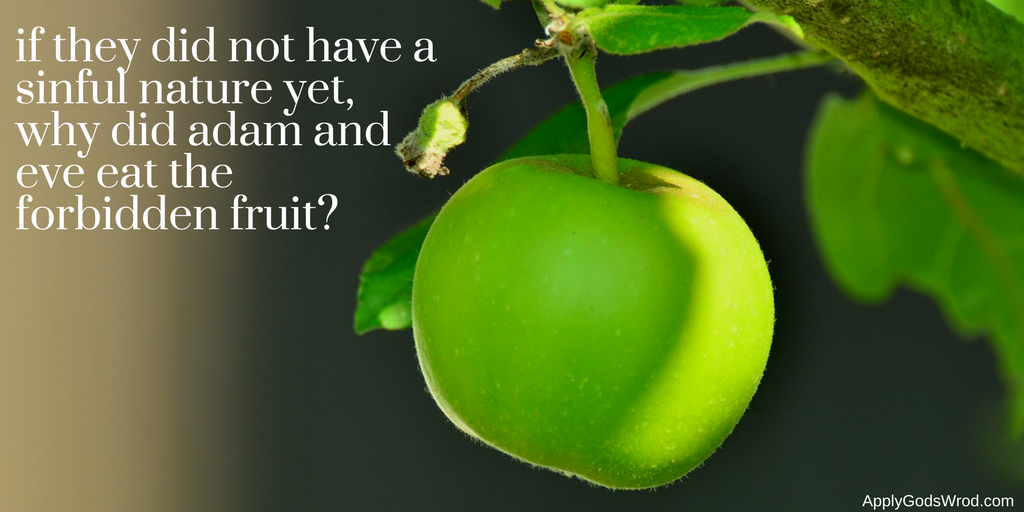 Why did Adam and Eve eat the apple? Well, we don’t know if it was an apple, but we do know that Adam and Eve ate the forbidden fruit. What can be more confusing than what kind of fruit it was is trying to answer “why” they chose to eat it at all.

This is why Jesus had to come, and come through the virgin birth. Besides Jesus being truly God and thus it would be impossible for two human parents to create him, he also had to be born through the conception of the Holy Spirit because if he was born through two humans he would have been born with a human sinful nature. Because Jesus had no sinful nature he did not sin on earth like the rest of us and thus he was able to be the perfect sacrifice, live the perfect life for us, and transfer his perfections to us.

Not everyone asks questions like these or cares to know the answers. We can simply accept that Adam and Eve fell, all humans are thus born sinful, God sent Jesus to give those who believe in him a new nature, and once we are fully redeemed after this lifetime we will never sin again. We can accept this without answering the “why” because this is what the Bible plainly teaches.

When it comes to the sovereignty of God, the origins of sin, and the motives of God, there are clear answers; but not every angle to these questions is easy to answer. And so we must always be humble enough to simply accept what the Bible clearly teaches.

Adam and Eve Sinned Because They Were Free to Sin

There has always been and there will continue to be debate about what “human free will” really is according to the Bible. Arminians and Calvinists will explain this idea very differently. What the Bible clearly says, however, is that God certainly gave Adam and Eve a choice to eat or not eat the forbidden fruit. In Genesis 2:16-17 (NIV), the Lord said to Adam:

You are free to eat from any tree in the garden; but you must not eat from the tree of the knowledge of good and evil, for when you eat from it you will certainly die.”

The words “You are free” make it clear to us that Adam and Eve had a choice to sin or not sin. But we are asking “Why did Adam and Eve sin?”

Was it because they had free will? I think an honest answer has to say “yes” to some degree or the other. We can talk all day about what “human free will” really means. While the most basic biblical answer to “Why did Adam and Eve sin?” is that they chose to sin, there are problems with this answer if we try to stretch it too far.

Most people say that God must give humans the freedom to sin if he wants them to be free to love. The problem with this logic (and I say logic because it is an argument based in reason rather than in Bible passages) is that if God must give us the type of “free will” that always gives us the capability to sin or not sin, will we be able to sin in heaven and on the new earth? If God is a moral monster if he does not allow us to “really love him” through giving us “the choice” to love him, either God will be this moral monster in heaven if we do not have the choice to sin or we will have the ability to sin throughout eternity just like Adam and Eve had in the beginning of creation. We can’t have it both ways.

I’m now resisting the urge to unpack what I believe true human freedom really is. In short (I can’t resist), I believe at the heart of biblical freedom is not the ability to sin or not to sin but the ability to obey God. Freedom is the ability to do what you want. If you don’t want to sin but you must, this is slavery. To be set free in such a way where you will always obey God is to have the purest form of human free will. God has free will and yet we know God cannot sin. To be free like God, this does not mean we must be able to do evil or good but that we will be free to always do what we really want just as God does.

But I digress back to our question at hand. If we all sin because we have a sinful nature, why did Adam and Eve sin if they had no sinful nature yet?

Before we get to the more conclusive and sure answer in the next section below, there seems to be some strong inferences we can make regarding the spiritual condition of Adam and Eve before the fall. Genesis 2:9, 16-17 reads:

Then the Lord God said, ‘Behold, the man has become like one of us in knowing good and evil. Now, lest he reach out his hand and take also of the tree of life and eat, and live forever—” 23 therefore the Lord God sent him out from the garden of Eden to work the ground from which he was taken.”

Genesis 3:22 seems like a sentence God could not bear to finish. It seems even the thought of man eating from the tree of life and living forever was too much to even verbalize for God. Why? It seems that if Adam and Eve were to have eaten from the tree of life at this point in the story, they would have remained in their sinful condition forever. 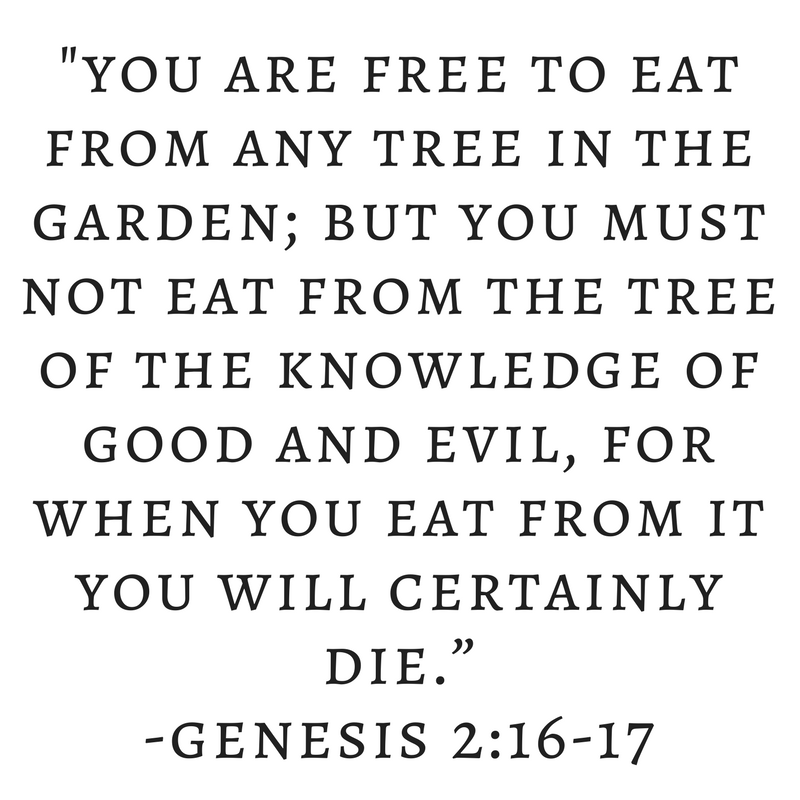 It seems safe to assume that whatever spiritual condition someone was in when they ate from the tree of life would be there spiritual condition forever since it seems whoever would eat that fruit would live forever. Thus, if Adam and Eve would have eaten the fruit from the tree of life first, it seems logical that they would have lived forever in their pre-fall, pre-sin, spiritually pure condition.

Obviously that did not happen. The explanation above is not stated plainly in Scripture. It seems plausible to me but I’m sure if we all thought hard enough about it we could poke holes in that theory too. What is more plain, however, is that regardless of what their spiritual condition really was, we know for certain that when Adam and Even at the apple they were not “in Christ” as all Christians will be for eternity.

The Christian’s eternal future will be different than Adam and Eve’s beginning because we will be secure in Christ. Adam and Eve sinned even though they were pure and without sin. But they were not “in Christ” yet. We will be perfectly in Christ for eternity, and thus we will not fall to sin ever in eternity.

Why Did Adam and Eve Eat the Apple and Sin If They Did Not Have a Sinful Nature? Because They Were Not “In Christ.”

The best answer I’ve found for why Adam sinned even though he did not have a sinful nature is from Martin Loyd-Jones exposition of Ephesians 1 in his book, God’s Ultimate Purpose. In his commentary on Ephesians 1:5-6, he takes time to unpack the difference between God’s creation and God’s children.

While God can certainly be considered the “Father” of all humans, the Bible makes a clear distinctions between a child of God who has been redeemed through Christ and an unbeliever who has yet to be adopted into God’s true family. Therefore, all humans are God’s creation. But in a very real sense, not all humans are his children. Speaking of Adam, Loyd-Jones states:

Yet he was still but a creature. [Adam] was certainly lord of creation, but at his height and in his perfection he was never more than that. But in Christ we are in a different position. As the Apostle [Paul] tells us in chapter 15 of his First Epistle to the Corinthians: ‘The first man is of the earth, earthly: the second man is the Lord from heaven.’ Adam was perfect, Adam was innocent, Adam was made in the image and likeness of God, but he was never made a ‘partaker of the divine nature.’ As we have seen already [earlier in this commentary], that privilege does not make us gods; but it does make a real difference to us. It puts us into a new relationship to God that even Adam did not enjoy.

Christians are ‘in Christ’. As such we have been raised to a higher level than Adam. Though he was perfect Adam was subject to fall and failure; but – and I say it with reverence and to the glory of God – those who are ‘in Christ’ cannot finally fall away; they cannot become lost. . . .

In Christ not only are the blessings which Adam lost restored to us, but we are given even more; in this new relationship to God which we enjoy in Christ we stand in a higher position than Adam. . . . Though you may have fallen grievously into sin in your past life, now, as a believer in Christ, you are a child of God, a son of God adopted into this new relationship, given new rank and status and position, raised to a level that is even higher than that of Adam before the Fall. And while it is true that in this life, and in this world we only enjoy some of the privileges and the honors and the blessings attached to it, we know that all these are but the ‘first fruits’, they are but the ‘foretaste’. ‘The crowning day is coming by and by’ when we shall ‘see him as he is’ and, being ‘like him’ we shall enter into all the prerogatives and privileges of our heavenly sonship. This is, and will ever be true of all Christians, all who belong to Christ, all who are ‘in him’.”