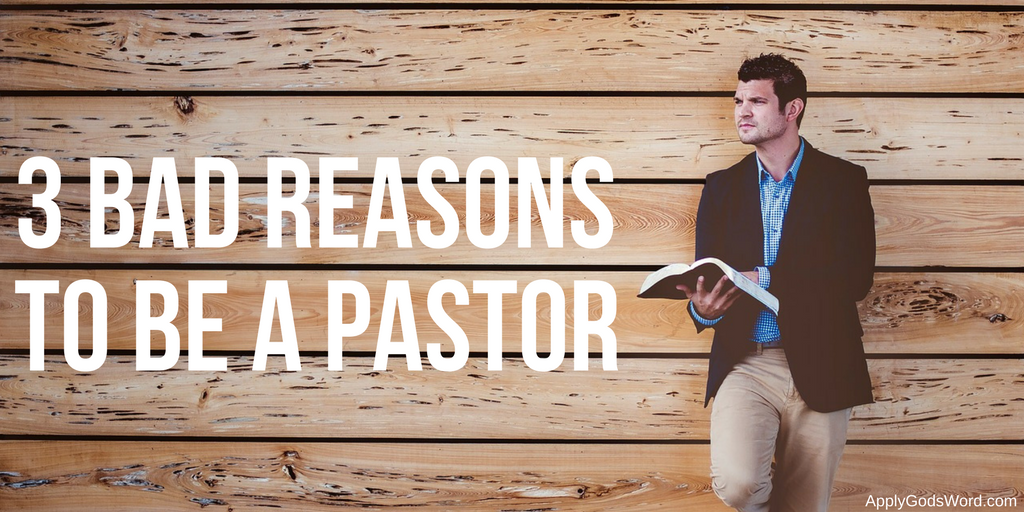 In other words, wanting to be a pastor is great, but the reason why you want to be a pastor is extremely important too. (Note: I’m going to just use the word “pastor” in this article, but all the points apply to being a “ministry leader” as well.)

Why we do what we do will shape what we do. In other words, the motives underlying why you do your ministry will actually shape what you choose to do in that ministry.

The best motive for everything, including being a pastor, is to glorify God. We glorify God by loving him and other people. Glory to God, love for God, and love for people, therefore, are in my opinion the top three biblical reasons for being a pastor.

There are countless bad reasons to be a pastor. What follows are my top three.

The most valuable commodity in the world is influence. Influence over people will lead to whatever else you are after. Influence is needed to accomplish good and bad in the world.

Again, why you do something will shape what you do. If you become a pastor for power, you will knowingly or unknowingly create an environment that weakens others and strengthens you. As a pastor you will need power to accomplish your good motives. But if your motive is power you will do bad things to people to get that power you crave.

Power must be used as a means to serve others. Serving others must not be a means to power. Some pastors work hard to serve, impress, and entertain people so they will give him influence. Once he has the influence the service stops and the dominating begins.

In Mark 10:35-45 John and James ask Jesus for authority. The other disciples get upset by their request for power. Jesus then states:

Jesus still had power and authority, so he’s not saying to reject these things. He’s saying Christian leaders are called to use power and authority in service to those they lead. If power is your reason for becoming a pastor, you ministry will be all about pushing others down to lift yourself up rather than using your influence to lift others up for the glory of God.

For the time will come when people will not put up with sound doctrine. Instead, to suit their own desires, they will gather around them a great number of teachers to say what their itching ears want to hear.” (2 Timothy 4:3)

Pastors who say God reveals his truth in a “progressive” ongoing way, which means certain things in the Bible are wrong now because we modern people know more, are simply pastors who are being led by the people rather than leading the people. Pastors who begin ministry in order to be liked end ministry as terrible, sensitive leaders. They usually don’t last long because they can’t handle criticism. And if they do stick around they are all over the place in their leadership. Vision changes all the time, the meaning of the Bible changes based on his perception of the people’s mood, and entertainment rather than truth becomes the focus of his church.

You can always know if a pastor is in the ministry to be liked when they hate you for not liking everything about them. If you disagree with their sermon one time, if you ask a question, or if you simply don’t give him enough pats on the back, you will become a target of this type of pastor.

None of this means a pastor should not seek to be liked. A pastor is not called to be a jerk. All I’m saying is that being liked by people should not be the reason you become a pastor. When you seek to love people by telling them the truth in a gentle way, some will love you and some will hate you. A pastor’s job, however, is simply to lead the people in knowing and living the truth as revealed in the word of God:

Therefore, having this ministry by the mercy of God, we do not lose heart. 2 But we have renounced disgraceful, underhanded ways. We refuse to practice cunning or to tamper with God’s word, but by the open statement of the truth we would commend ourselves to everyone’s conscience in the sight of God.” (2 Corinthians 4:1-2)

Throughout the book of 1 Timothy Paul instructs us on what good Christian leadership looks like. He warns us that anyone who loves money is not fit to be a pastor. When Paul list the qualifications of an elder in 1 Timothy 3, he states in 1 Timothy 3:3 that he must not be “. . . a lover of money.” In 1 Timothy 6 Paul lists some signs of false teachers, he describes these men like this:

They have an unhealthy interest in controversies and quarrels about words that result in envy, strife, malicious talk, evil suspicions5 and constant friction between people of corrupt mind, who have been robbed of the truth and who think that godliness is a means to financial gain.

6 But godliness with contentment is great gain. 7 For we brought nothing into the world, and we can take nothing out of it. 8 But if we have food and clothing, we will be content with that. 9 Those who want to get rich fall into temptation and a trap and into many foolish and harmful desires that plunge people into ruin and destruction. 10 For the love of money is a root of all kinds of evil. Some people, eager for money, have wandered from the faith and pierced themselves with many griefs.” (1 Timothy 6:4-10, NIV)

People often misquote this passage and say that “money is the root of all evil.” But that’s not what it said. It says “the love of money is a root of all kinds of evil.” Pastors are not called to hate money, reject money, or to never think about money. Pastors are simply called to not love money.

A love for money in a pastor will cause him to treat rich people better than poor people. It will cause him to say what will bring in the dollars rather than what the word of God says. A love for money will overtake his love for God, “No one can serve two masters, for either he will hate the one and love the other, or he will be devoted to the one and despise the other. You cannot serve God and money” (Matthew 6:24).

A love for money is a bad reason to be a pastor because your ministry will end up serving money rather than God.

Be a Pastor for the Best Reason

The reason why you want to be a pastor will shape the type of pastor you become. Choose the best motive of glorifying God through loving him and people. Getting your motives right is the first step to being the best pastor possible.