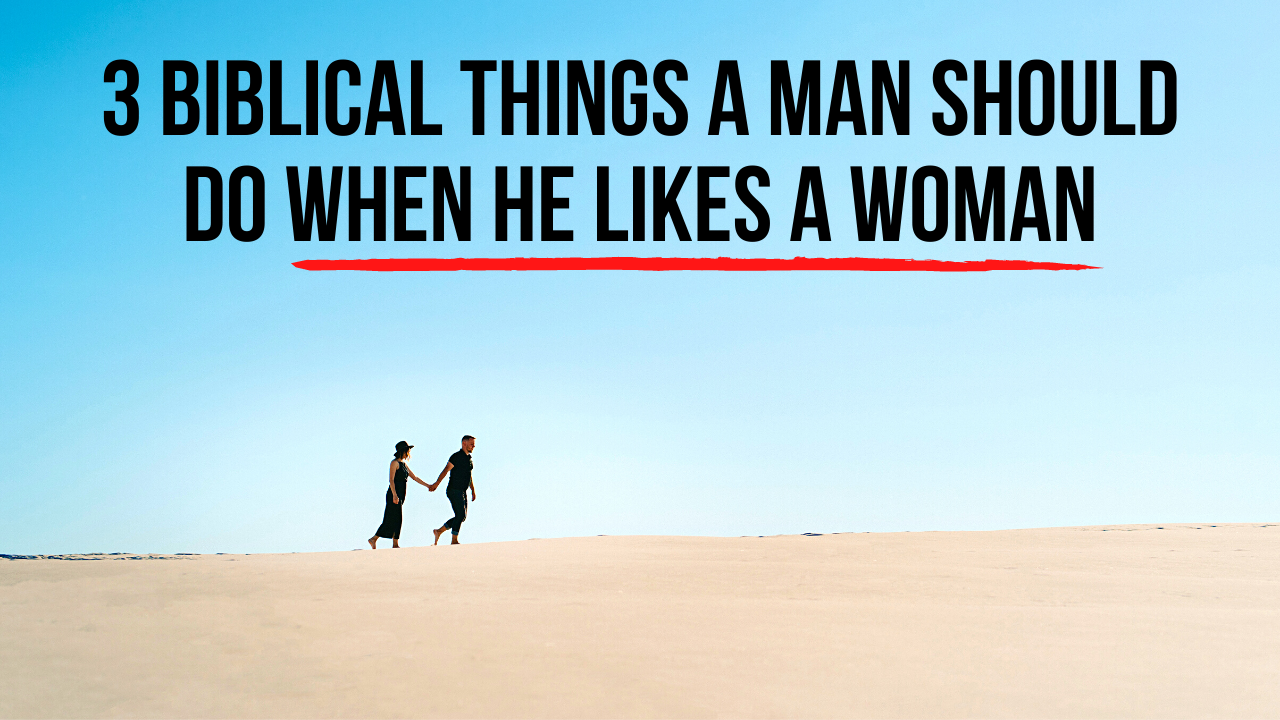 Here are three biblical steps a man should take when he likes a woman.

And you may also want to read my article, 3 Biblical Things a Woman Should Do When She Likes a Man.

By “Pray for her,” I don’t mean “Pray to obtain her.” I’m not saying that when you are interested in a woman, your first step in pursuing her is asking God to give her to you. Rather than asking God for “that one.” It’s better to ask God to lead you both to “the one” he has for you both.

Of course it’s good to make requests to our Father. We are actually commanded to ask God for things (Philippians 4:6). But I do believe prayer is meant to be less about God learning what our will is and then doing it and it is more about us learning what God’s will is and then us doing it by the power he supplies. Jesus did ask that the cup of suffering pass from him, but in the end he said, “nevertheless, not as I will, but as you will” (Matthew 26:39).

Therefore, rather than praying to obtain this woman you have an interest in, start by praying for this woman. Ask God to lead her to the right man he has for her, even if it’s not you. Ask God to lead you to the right woman he has for you, even if it’s not her. Ask God to make it clear to you both if you two should proceed further in your current connection with each other to explore what he may want for you as a couple. And ask him for the willingness to accept his will no matter what.

I think this is the step that many men overlook most often. A lot of Christian guys see a woman they are interested in, they pray about her, they finally work up the courage to approach her, and their first words are something like, “Hi, would you like to go on a date with me?”

While the courage is certainly commendable, the approach leaves much to be desired. Christian women are usually very guarded about relationships. Relating to a woman before fully pursuing her is very important because it gives her more information about you. When you ask a woman out but she has doubts about you, her default answer is no. By showing her you have things in common with her, you are giving her a reason to give you a chance.

Additionally, trying to relate to a woman before fully pursuing her is wise because it gives you time to gauge whether or not God is actually leading you to pursue her in a more intentional way

For some of you, you need a long “relating season” through forming a real friendship before dating. For others of you, you may meet someone online and just need a few days of relating through messaging or a few phone calls before going a on a date to learn more.

Walk with the Lord and do what he’s leading you to do (James 1:5). But it’s a wise choice to try to at least see if you too relate well to each other before you decide to all out pursue her.

How a man pursues a woman should be true of his personality. I don’t think it is helpful to create a rigid blueprint that all men must follow exactly to pursue a woman because the Bible doesn’t do that.

Every man is different. Some guys will be comfortable asking her on a date right away. Other men will need to start the pursuing process by inviting her to a group outing with his friends. Some men will need to have a long “define the relationship” talk where he lays out his intentions and goals for a period of courting. Other men will take a more traditional dating route and ask her to go on some dates and then ask her to be in an official dating relationship if those dates go well. In the end, how a man pursues a woman is less important than his choice to just do it.

To be clear, there’s no command in the Bible that says a man should pursue a woman. But in the Bible, husbands are called to lead their wives and lay their lives down for her as Christ did for the church (Ephesians 5:21-33). While a boyfriend should not try to act like a husband, it’s good to see some qualities of leadership in a man during the dating phase by him pursuing the woman because this is good evidence he will be a good leader in marriage. A passive man in singleness and dating will be a passive man in marriage.

So even though there is a not a direct command in the Bible telling men to pursue women, when a man likes a woman, the principles in the Bible should lead him to pursue her.