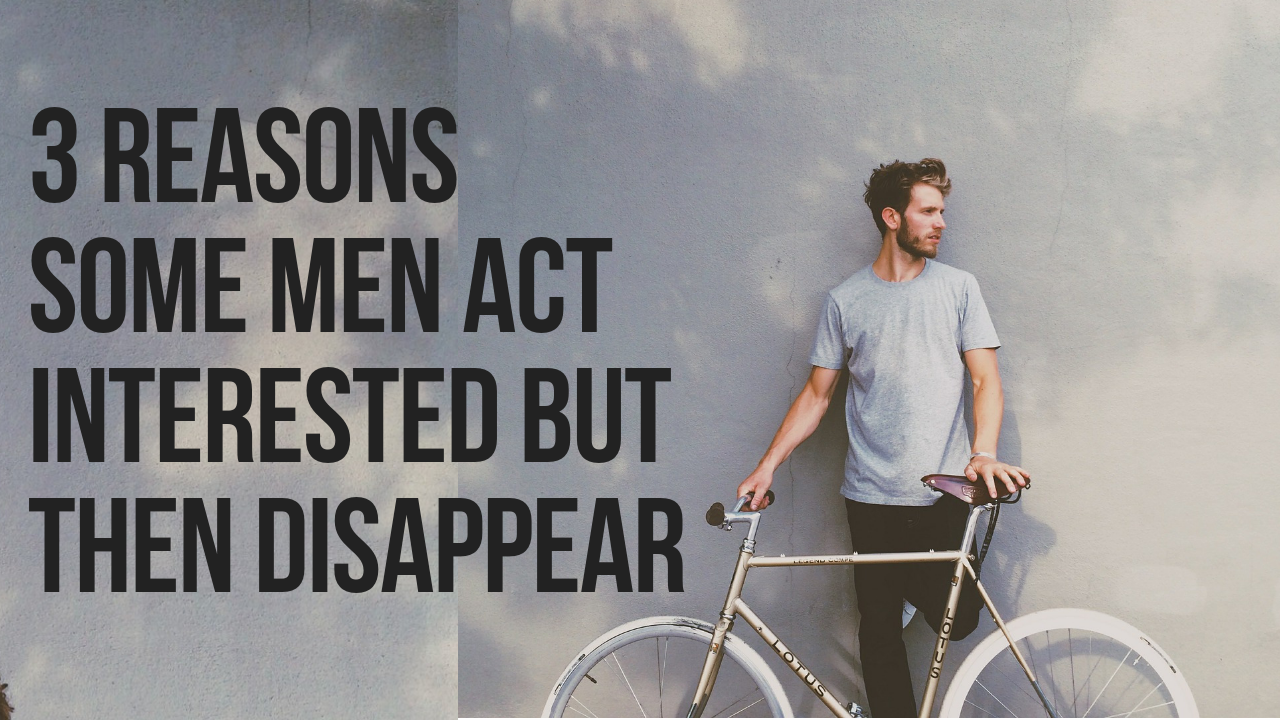 Recently a woman asked me, “Why do some men act interested but then disappear?” This is a hard question because the actions of each person are motivated differently. Everyone does things for different reasons.

However, if I was to generalize common reasons why this often happens to a woman, here are 3 possible reasons.

This first reason is the worst-case scenario and I certainly don’t think you should assume every guy who seemed interested but then disappeared was just a player. However, there are certainly a lot of immoral guys out there who are simply fishing for a woman to give them what they want. Sadly the church is full of players too. When they don’t get what they are looking for quick enough, they just leave.

So if a guy was acting interested, perhaps he disappeared because he realized you were looking for a serious godly relationship and he just wanted a fling. Perhaps he just wanted emotional energy from you and liked the feeling of being liked. Perhaps he started dating someone else because he was flirting with multiple women at the same time.

Players come in many shapes and forms. But one sign of a player is when he acts interested but then just totally disappears. If a man like this returns, it’s best to keep your distance, for as Proverbs 13:20 states, “Whoever walks with the wise becomes wise, but the companion of fools will suffer harm.”

Another possible reasons a man acted interested was because he was interested. However, it’s possible that after getting to know you more and learning about your compatibility with one another, he then decided that he was not interested anymore.

While this can be hurtful and confusing if the woman liked this guy, this type of man should not be seen in the same light as the player. It’s possible this man had good intentions to get to know you better but for healthy reasons felt like the relationship would not work. In kindness he may have then backed away to protect you from getting the wrong idea after his feelings have changed.

While in some cases the respectable things would be for a man to talk about why he has backed away, there are other times where this is not required and he might feel like a conversation like that would only make things worse. If a man has openly expressed romantic interest, I believe the decent thing to do is to then openly express why his feelings have changed.

However, if a man never expressed open interest and a woman just felt like he was interested, I don’t believe the man is always required to share all his feelings. For one, in his mind he might not be aware that the woman picked up on his interest to begin with. So he might feel odd to tell her that his feeling have changed towards her when he never told her had feelings for her to begin with. If a man explained why he disappeared to a woman that did not even know he liked her at one point, she would probably look at him pretty oddly if he tried to have a conversation like that.

So a man may have shown interest but then disappeared because he was no longer interested and did not feel the woman would even notice that he has vanished from the scene. He may just be trying to be nice rather than point out all the reasons why he doesn’t like her romantically. He may have taken a step back as a sign of respect and hoping to guard her heart.

Certainly many guys do show interest and then disappear for a variety of reasons, however, at times the woman can also misread the situation and feel like the man left when in fact the man was never really there to begin with.

Some guys are more friendly than other guys so perhaps she misread him showing interest in her when in fact that’s how he treats everyone. Or perhaps they were spending time together because of an event, service project, or a work assignment. During their time together maybe she began to feel like he liked her. But perhaps he was just being nice while they were together because of this task they were accomplishing together. And then when the task was over he simply went on his way because he was not actually interested in her but in the task they had been working on together.

For more on this, you may want to watch my video 12 Signs Someone Secretly Likes You so you can have a better understanding of what the signs actually are that someone really does like you.