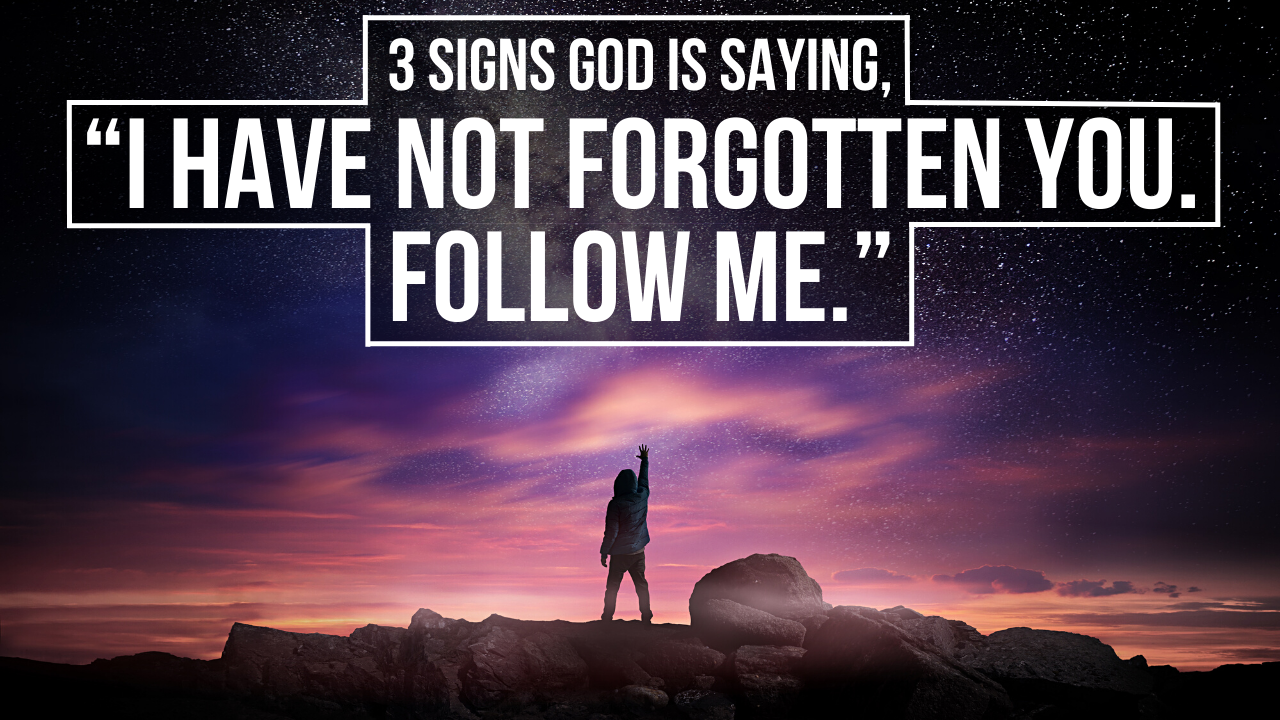 Here are 3 instances where God is reminding you that he has not forgotten you and is encouraging you to keep following him.

1. When You Feel Like God Could Never Use You Because of Your Past Failures, He’s Saying, “I Have Not Forgotten You. Follow Me.”

Imagine how Peter felt. He walked closely with Jesus while he was on earth, more closely than almost everyone else. James and John were the only other two in Jesus’ most inner circle. And yet it was Peter, not James and John, who denied Jesus three times right when Jesus was going through his hardest moments on earth. Jesus had been there for Peter when Peter needed him. But Peter was not there for Jesus during his most intense trial.

This brings us to John 21. Jesus had appeared to the disciples already, but Jesus and Peter had not yet talked about what happened between them. Peter must have been crushed. He probably thought he ruined his relationship with Jesus, which is probably why he went back to fishing.

Peter was a fisherman before he followed Jesus. And now that he betrayed Jesus, he probably felt like he should go back to what he was doing before since he ruined everything he had with Jesus. John 21:3-4 then states:

Simon Peter said to them, ‘I am going fishing.’ They said to him, ‘We will go with you.’ They went out and got into the boat, but that night they caught nothing.

Just as day was breaking, Jesus stood on the shore; yet the disciples did not know that it was Jesus.

They caught nothing, surely intensifying Peter’s belief that God had forsaken him because of his past failures. But notice what Jesus did. He didn’t wait for Peter to come and find him. No, Jesus went out and found Peter.

Likewise, if you feel like God will never use you again because of your past mistakes, Jesus is still pursuing you. But you have to do what Peter did next. Peter responded to Jesus’s pursuit, “When Simon Peter heard that it was the Lord, he put on his outer garment, for he was stripped for work, and threw himself into the sea,” (John 21:7).

Jesus is still calling you. He has not forgotten you. Follow him.

2. When You See Other People Being Blessed, God Is Saying, “I Have Not Forgotten You. Follow Me.”

This is probably how Peter felt. John, not Peter, was given the title “the disciple Jesus loved.” That must have stung Peter, especially after Peter had failed Jesus while John had not. But God was writing a different story for Peter than he was for John. Neither story was better or worse. It was just different. John 21:21-22 states:

When Peter saw [John], he said to Jesus, ‘Lord, what about this man?’ Jesus said to him, ‘If it is my will that he remain until I come, what is that to you? You follow me!’”

3. When You Are Faced with an Impossible Situation, God Is Saying, “I Have Not Forgotten You. Follow Me.”

While John had an affectionate nickname, “the disciple Jesus loved,” Jesus gave Peter an affectionate new name too. He used to be called Simon, but in John 1:42 it states, “Jesus looked at him and said, ‘You are Simon the son of John. You shall be called Cephas’ (which means Peter).” Peter means rock. In Matthew 16:18 Jesus explained the relevancy of Peter’s new name, “And I tell you, you are Peter, and on this rock I will build my church, and the gates of hell shall not prevail against it.”

This is similar to what Jesus said about Lazarus before he died, “This sickness will not end in death. No, it is for God’s glory so that God’s Son may be glorified through it,” (John 11:4, NIV). If I heard Jesus say that, I would have been very confused when Lazarus did die. But when we look closely at what Jesus said, he didn’t say Lazarus would not die. He said this “will not end in death” for Lazarus; and when Jesus raised him from the dead, the preciseness of his promise was made abundantly clear.

Now to him who is able to keep you from stumbling and to present you blameless before the presence of his glory with great joy, to the only God, our Savior, through Jesus Christ our Lord, be glory, majesty, dominion, and authority, before all time and now and forever. Amen.”

No matter what, God is saying, “I have not forgotten you. Follow me.”