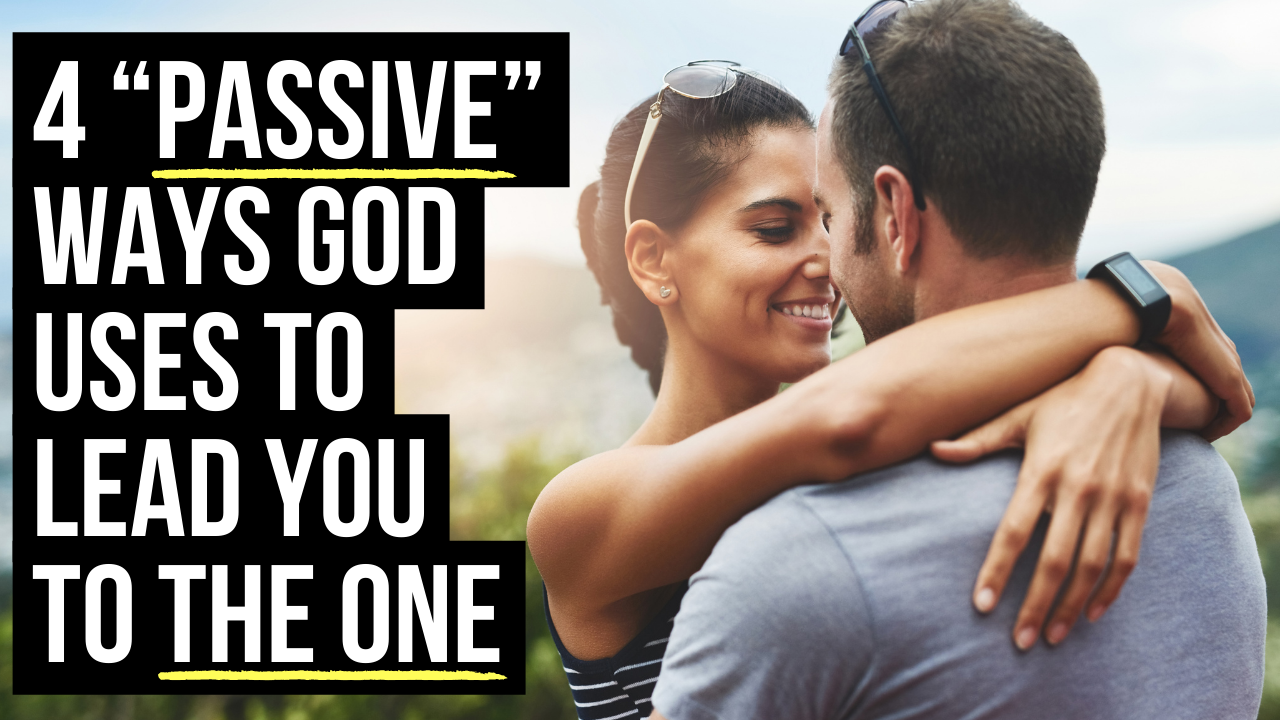 Usually the word “passive” is a negative. You don’t want to be a passive man, a passive woman, or someone who just waits and never acts.

But there’s another way to use this word, like in the phrase “passive income.” Passive income means you have setup some sort of business that operates without your constant, active involvement. For example, if you setup an online store, that will produce passive income for you because while you sleep, people can still order items.

However, if you owned a traditional brick and mortar store, you need to actually be behind the cash register, actively making the transaction with someone who wants to buy from you. So you had to do a lot of work to setup the online store. You weren’t “passive” in that sense; but once it is setup, it can work without your direct involvement, thus producing “passive” revenue.

This is the type of “passive” I’m talking about in this article when it comes to finding a spouse. So here are 4 passive ways to find a spouse that actually work.

I think lists are good. But long lists are bad. Why? Because the longer your list, the more barriers you are putting up between you and meeting someone.

As Christians we must have some sort of list because the Bible requires things like only marrying another believer (1 Corinthians 7:39), seeing the fruits of the Spirit in someone who claims to be a believer (Galatians 5:22-24), and being able to fulfill the biblical marriage roles for a husband and wife (Ephesians 5:21-33). Never compromise on biblical requirements.

It’s the personal preferences that often limit our options. Of course you have to have some preferences. God doesn’t expect you to date or marry someone you could never find attractive, who you don’t enjoy being around, or who lives a completely undesirable lifestyle to you.  But the more personal preferences you have on your list, the more barriers you are putting up between you and other singles.

Lists are like a filter. A filter is a barrier that purposely keeps some objects out and only allows other objects in. If your dating filter is too extreme, you will basically be filtering everyone out before you even get to know them at all. But when your filter is healthy, blocking obvious red flags but allowing good options through, you will naturally have more chances to meet someone to date.

By limiting your filter in a wise way, you are increasing your options without changing the amount of people you meet, thus this is a passive way to increase your dating pool.

2. Live More of Your Life Out of Isolation

Isolation is the easiest way to stay single.

I’m not saying that dating is like sales. Don’t try to sell yourself to the opposite sex with silly marketing tricks. But for examples sake, let’s think about a salesman who lives off commission. If this person sat at home waiting for customers to call rather than calling potential customers, went to business conferences but didn’t talk to anyone there, or printed flyers but then posted them in the forest rather than in the city, what would we say? “Um, sir . . . I’m sorry to hear about your financial difficulties, but I think you need to change your strategy.”

In much the same way, many Christian singles feel like they are being active but in fact they really aren’t. They spend a lot of time alone at home wanting a relationship. They go to church but don’t get involved. They setup online dating profiles and then quickly delete them when no one messages in the first week, even though they didn’t message anyone either. And they may even go to parties or singles events to meet people; but when they get there, they just sit quietly in the corner.

It’s interesting that when you see people doing ministry and spreading the gospel in the Bible, they usually went to the cities because that’s where the people are (see Acts 17). It takes active effort to be social, but once you get around more people, more people will “passively” come around you too (Acts 17:16-21).

3. Increase Friendships with People from Your Same Gender

I get it! I’m not trying to minimize how scary it can be to be more social, especially when it comes to interacting with the opposite sex. One solution that is not so scary, however, is to focus on increasing your friendships with people from the same gender.

Going back to the sales analogy, this is called networking. A salesman knows he can’t just focus on people who are willing to buy from him. Rather, he focuses on developing a strong network, even with people he knows will never buy from him, because he knows his network will actually introduce him to other people who might want to buy from him.

Do you know that, in the practical sense, Jesus didn’t actively seek out every disciple individually? Rather, Jesus used some of his disciples to draw other disciples to him (John 1:40-41, John 1:45). In a way, this was a “passive strategy” to multiply his followers.

Friendships work like this for Christian singles looking for a romantic relationship. The more people you know, the more new people you will meet. Therefore, one reason you may not be meeting many new Christian singles from the opposite sex is because you don’t spend much time with singles from your same sex. Singles usually flock together. The more you know, the more you meet.

4. Do Things You Can Only Do When You Are Single

I’m certainly not saying it is easy for single people to go on a mission’s trip, get involved in a few different local ministries, or participate in social clubs where people can gather over a common interest. Single people have full-time jobs and all kinds of crazy demands in life too. I’m just saying it’s doesn’t get easier to do these things when you get married and have kids. It gets a lot harder.

So when you are single, the best way to meet other singles is to do things that are harder to do when you are married and have a family to raise. Why? Because the majority of other people doing those things will also be single.

This is one of the ways God introduced me to my wife. As many of you know, I met my wife on a mission’s trip when I was serving on Mercy Ship for seven months in Liberia. There were some married people and families serving there too, but the vast majority of people serving on this mission were single. In fact, among alumni of Mercy Ships, it has often been dubbed the Love Boat because so many people end up meeting their future spouse because there are so many Christian singles serving there.

When you do these types of things, you won’t actively have to try to meet other singles. They will just be there, doing the same thing you are doing, thus giving you both a great opportunity to connect with each other.

Do you know what that random, natural, and intentional approaches are to meeting the person God wants you to marry? If not, you can read about that topic in this article, The Only 3 Ways to Meet The One God Has for You.