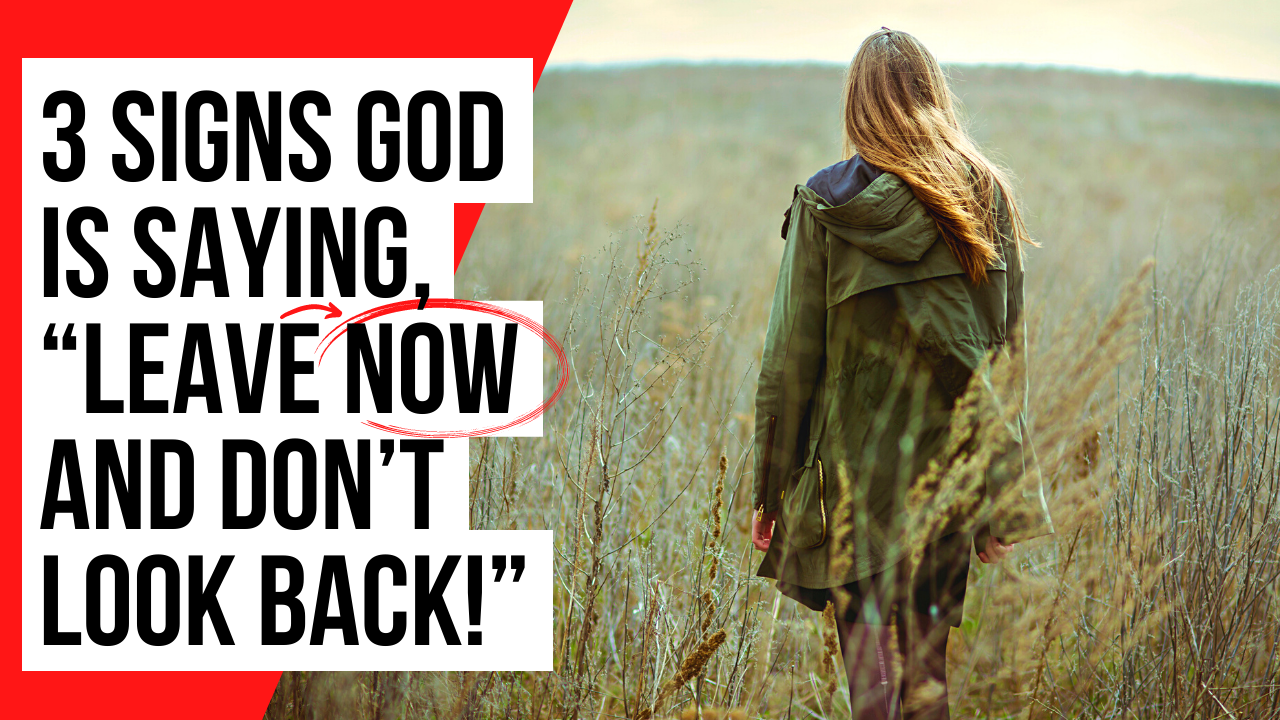 Here are 3 signs that mean God is saying, “Leave now and don’t look back!”

1. If an Environment Is Warping Your Moral Compass, This Is a Sign God Is Telling You to Leave Now and Don’t Look Back

The story of Lot in Genesis 19 is one of those passages in the Bible that makes you scratch your head the first time you read it. There are some truly disturbing details outlined here.

God is planning on destroying Sodom and Gomorrah, but for the sake of Abraham God sends two angels disguised as two men (Genesis 19:29). Lot invites them to stay at his house through the night (Genesis 19:3), but the men of that city want to rape his guests (Genesis 19:6). Lot then offers to give these townsmen his two virgin daughters in hopes they won’t rape his male guests (Genesis 19:8). The townsmen reject Lot’s offer (Genesis 19:9) but thankfully the angels then strike the men with blindness and rescue Lot and his daughters (Genesis 19:10-11). At the end of Genesis 19, if things were not disturbing enough, Lot’s two daughters get him drunk so that they could become impregnated by him because they feared there were no men to give them offspring (Genesis 19:33-38).

Genesis 19 is a passage in Scripture where we need to remember that everything in the Bible is not meant to be an example to be followed. Sometimes God allows parts of history to simply be recorded as examples of what not to follow. Nowhere in this passage when disgusting and immoral things occur does God condone such behavior.

Rather, through these disturbing details, it becomes abundantly clear of why God was going to destroy Sodom and Gomorrah. Lot and his daughters clearly had their moral compasses warped by living in this sinful environment for so long. When Lot and Abraham separated, Genesis 13:12-13 states, “Abram settled in the land of Canaan, while Lot settled among the cities of the valley and moved his tent as far as Sodom. Now the men of Sodom were wicked, great sinners against the Lord.”

Lot and his family learned the wicked ways of Sodom, which is clear by these examples of how warped their moral compass had become. As 1 Corinthians 15:33 explains, “Do not be deceived: ‘Bad company ruins good morals.’”

Therefore, God could be telling you to leave and don’t look back if you are in a place that is corrupting your morality. As the angels said to Lot in Genesis 19:15, “Up! Take your wife and your two daughters who are here, lest you be swept away in the punishment of the city.”

2. If You Know It’s Just a Matter of Time Before God Brings Justice on an Organization or Group You Are a Part of, This Is a Sign God Is Telling You to Leave Now and Don’t Look Back

Sometimes we become a part of a church, a ministry, or a place of employment because we thought this was a good environment that we could glorify God at. But then one of two things often happens. We either realize we made a mistake because this place is actually very sinful and is doing things God is going to judge them for. Or things actually did start out well at this place, but over time the leadership and followers slowly lost sight of God and they became corrupt.

Either way, once you realize a place is so corrupt that you cannot help turn it back on the right moral way no matter how hard you try, this means it’s time to go.

This is what happened to Lot. The angels warned Lot about the coming judgment. There was a bit of time for people to leave if they wanted to believe God and escape his coming judgment. Never think that just because a person, church, or organization is not getting judged right now that it is safe to remain close to them. God’s judgement always comes but he often gives people plenty of time to either repent or to leave those places that he will judge shortly (2 Peter 3:9). As Genesis 19:12-14 explains:

Then the men said to Lot, ‘Have you anyone else here? Sons-in-law, sons, daughters, or anyone you have in the city, bring them out of the place. For we are about to destroy this place, because the outcry against its people has become great before the Lord, and the Lord has sent us to destroy it.’ So Lot went out and said to his sons-in-law, who were to marry his daughters, ‘Up! Get out of this place, for the Lord is about to destroy the city.’ But he seemed to his sons-in-law to be jesting.”

People will think you’re crazy for leaving before God brings justice. But once you leave and then God does bring justice and those people who stayed now have to reap the consequences, it will be clear they were the crazy ones for thinking they could deceive God and escape his righteous judgment by staying and supporting that corrupt environment. As Galatians 6:7-9 explains:

3. If God Has Graciously Given You One Last Chance By Physically Removing You from Something Bad Because You Were Not Leaving on Your Own, This Is a Sign He’s Telling You to Go and Don’t Look Back

Sometimes, through his immense grace, God will actually remove us for somewhere or someone that he does not want us around. But we will then have to choose to not try to go back.

If we try to go back to something that God graciously removed us from because it was going to destroy us, in the end this choice to go back will bring that destruction on us despite God giving us that one last opportunity to escape it. Notice how this played out for Lot and his family in Genesis 19:15-17, which states:

As morning dawned, the angels urged Lot, saying, ‘Up! Take your wife and your two daughters who are here, lest you be swept away in the punishment of the city.’ But he lingered. So the men seized him and his wife and his two daughters by the hand, the Lord being merciful to him, and they brought him out and set him outside the city. And as they brought them out, one said, ‘Escape for your life. Do not look back or stop anywhere in the valley.’”

Sometimes God warns us but we sinfully “linger.” If God loving removes you despite your lingering, don’t look back. As Genesis 19:26 states, “But Lot’s wife, behind him, looked back, and she became a pillar of salt.”

Never forget how much God loves you. He respects you enough to allow you to choose to reject his saving kindness if you want. Just remember that when he removes you from an evil place, he’s doing it because he loves you. So when he says, “Leave this place” or “Leave this person,” obey him and don’t look back.