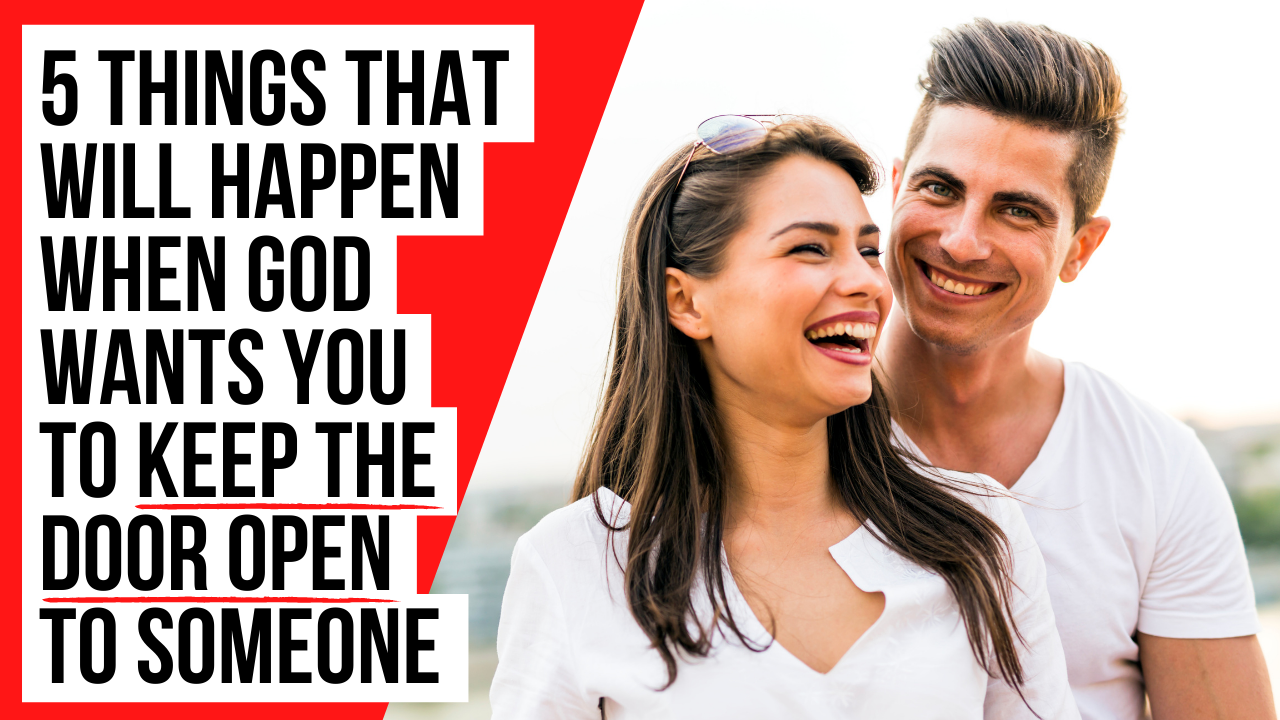 When I use the phrase “keep the door open,” I’m referring to you leaving your options open with someone rather than intentionally closing those options or proactively making a definite move to date this person.

So here are 5 things that will often happen in your life when God is telling you to just keep the relationship door open to someone.

1. If This Person Checks the Biblical Boxes and You Are Intrigued By Them, This Is Often a Sign God Is Telling You to Keep the Door Open

Before you can hear what the Holy Spirit is saying to you in a personal way, it’s first necessary to know what the Bible says about relationships so you know whether or not you are hearing the Spirit accurately.

According to the Bible, there are basically 2 principles that should guide you when deciding if you should keep the door open to someone:

If both of these elements are present, it’s not a sign you will be with this person one day. But it is a sign that it’s biblically acceptable to keep the relationship door open to see what God might have planned for you two.

2. If They Have Shown Interest in You But You Have Been Too Passive to Let Them Know You Are Interested Too, This Is Often a Sign You Should Keep the Door Open to Them

If you sent them mixed signals because you were fearful, uneasy with the speed they were going, or just unclear about what God was saying, by staying present and not ghosting them, it’s likely they will try again at some point.

However, in a situation like this, I think the best path forward is to do something a little bit more than just keeping the door open. Even though your initial response was passive, you can now do something more proactive to let them know how you really feel. Call them more, invite them to an event with you, or just tell them you actually are interested but you were just dealing with some fear.

Leave the door open and when you get another chance, just be honest (Ephesians 4:15) and let the chips fall where they may.

3. If You Could See Something More With This Person But Your Friendship Has Not Plateaued Yet, Oftentimes God Is Telling You to Just Keep the Door Open

One nuance you will need to be wise about is the emotional level of connection you and a friend of the opposite sex have. Friendships between single men and women can be very helpful because you can help each other see a different perspective, you can learn to treat the opposite sex in a respectful way, and you can get more comfortable interacting with the other gender.

But friendship does have it’s limits. When a single man and woman who are friends start connecting on a deeper level than what is normal for “just friends,” this is when the relationship needs to change one way or the other. The two need to take a step back so they are not leading each other on and so they don’t inadvertently keep each other single because they look like a couple and thus they are scaring off actual suitors. Or they need to take a step forward and become an official couple so their commitment can match their emotional connection (Proverbs 4:23).

When you are somewhere in the middle on this journey – meaning if are starting to see romantic potential between you two but the friendship is still healthy and you don’t yet need to become an official couple – God is probably telling you to just keep the door open.

4. If the Only Thing Holding You Back Is an Unhealthy Fear, This Is Often a Sign God Is Leading You to Keep the Door Open

If your feelings don’t change after a few weeks or a few months, close the door so you can move on. But in the meantime, just keep the door open to see what God might do (Proverbs 3:3-5).

5. If You Are Just Plain Confused and Have No Idea What to Do About This Person, The Wisest Option Is Oftentimes to Just Keep the Door Open

Perhaps you’ve related to all of these points thus far, perhaps none of them have related to you, or perhaps after each point you’ve said, “That kind of relates, but I still just don’t know for sure what I should do!”

It’s in these moments of confusion where the best option is sometimes to just do nothing. Move on if you know it’s not good, do something if you know it is good, but just be patient if everything is still too new and unclear.

By leaving the door open, you are giving yourself more time to see what the Lord is actually saying rather than acting one way or the other before truly knowing what he is telling you to do.