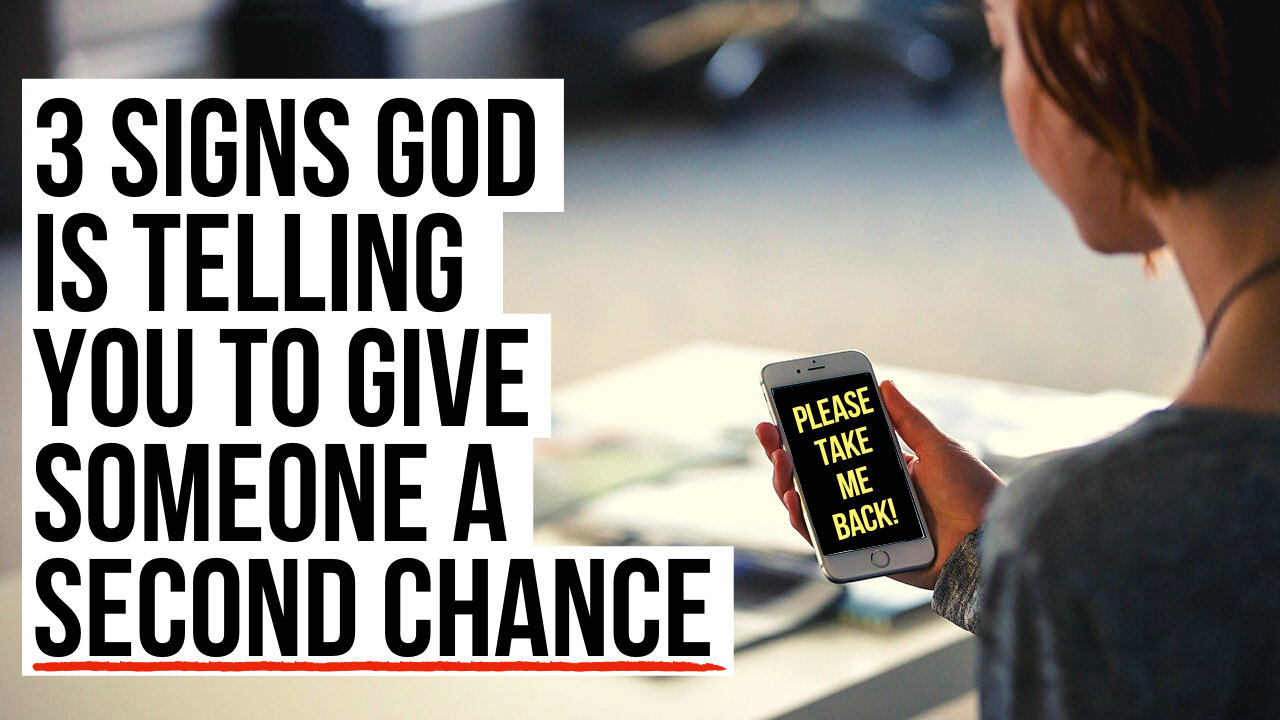 Here are 3 signs that could mean God is truly telling you to give someone a second chance.

And on a quick point of clarification, God requires all Christians to forgive anyone who sins against us. But this video is more about entering into a dating relationship with someone again, although its general points can certainly be applied to other types of reconciliation opportunities as well.

1. If You Realize This Offense that Caused the Breakup Was an Outlier for This Person’s Normal Behavior, This Could Be a Sign God Is Telling You to Give Them a Second Chance

No sin is excusable and we should not create reasons in our minds to give abusive people more chances than they deserve to hurt us again and again. But sometimes the people we love do really stupid things that are very unlike them under normal circumstances.

In short, we should give more weight to patterns than outliers. Some offenses, even if they happened just once and were an outlier, are just too damaging and the relationship can never be rebuilt. But in some cases, it is possible for a couple to break up because of someone’s sin but to then forgive one another and start fresh.

Be wise here. You must always forgive but you are not required to always reconcile, especially when this would prevent you from wisely guarding your heart as Proverbs 4:23 commands. Allow the Lord to lead you so you can accomplish 2 Timothy 2:22, “So flee youthful passions and pursue righteousness, faith, love, and peace, along with those who call on the Lord from a pure heart.”

2. If They Have Demonstrated a True Change in Their Life Through Their Actions Over a Significant Period of Time, This Could Be a Sign God Wants You to Take Them Back

The advice we learned as children should still be a guiding principle into our adult lives, “Actions speak louder than words.” This truth is especially important to remember when considering a reconciliation with someone who hurt you in the past.

The temptation will be to listen to their pleading words and empty promises that they will never do that sin again which caused the breakup. Even if you really want to take them back, you have to wait long enough to see if their actions will validate their words. It’s easy to say the right thing over the phone. It’s hard to live the right way over a consistent and substantial amount of time.

The warning Jesus gave us about false leaders can also help guide us in relationships as well. In Matthew 7:15-16 Jesus warned, “Beware of false prophets, who come to you in sheep’s clothing but inwardly are ravenous wolves. You will recognize them by their fruits.”

3. If You Both Still Want to Be Together and There Is No Biblical Reason Stopping You, This Could Be a Sign God Wants You to Try It Again

There doesn’t always need to be some huge sinful reason for why a relationship doesn’t work out. Sometimes it’s a timing issue, a maturity issue, or there is a personality clash that the couple feels they just can’t overcome.

But, sometimes, after a breakup the couple starts to feel different. The loss of the relationship helps them realize how good they were together. This truly does happen sometimes. I personally know one couple who broke up when they were dating simply because they didn’t feel like it was a good match, only to later start dating again and eventually marry.

But if you two broke up and now you both want to give it another try and there is no biblical reason stopping you, then it is possible God does want you to try it again. God gives Christians immense freedom when it comes to relationships, he just demands that we do not break any commands in the Bible and that we seek to follow the Spirit’s leading in our lives.

If you are doing that and you both want to get back together, it’s okay to give it another shot. Just don’t get into an unhealthy cycle of breaking up and getting back together again over and over.