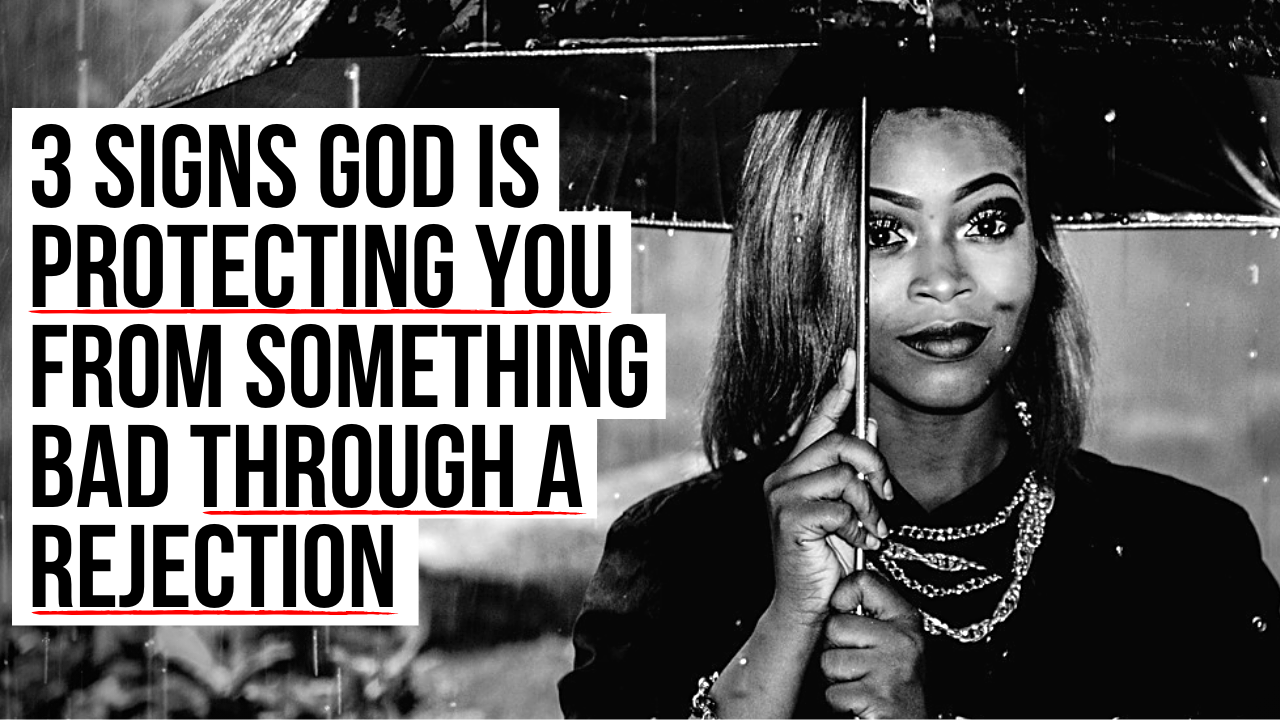 Here are 3 signs God is using a rejection as protection for you.

1. If You Know You Were With Someone (or Liked Someone) God Did Not Want You With But Then This Person Rejected You, This Is a Sign God Was Actually Protecting You

Sometimes in love God makes the decision for us when we were not going to make the correct choice freely. In love God will often remove unhealthy things from our lives when we are too weak, too attached, or too blinded to see correctly.

James 4:4 states, “You adulterous people! Do you not know that friendship with the world is enmity with God? Therefore whoever wishes to be a friend of the world makes himself an enemy of God.” Intellectually we know this is true as Christians, but it can be very hard to obey this. In kindness God will often give us opportunities to break our bonds with the world by allowing those in the world to reject us.

We can keep rejecting God by going back to the world; but when we see these rejections as protection, we can then take advantage of this God-given opportunity by letting the rejection remain. When you get rejected by someone you know God did not want you with, it’s important to not go back to that bad relationship so you can choose to start fresh with the Lord as you seek better relationships in the future.

2. When a Relationship Rejection Causes You to Mature Into the Person God Wants You to Be, This Is a Sign God Is Using This as Protection Against Missing the Relationship God Does Want for You

On a practical note, God does this because a person living for the Lord will only be attracted to someone else who is living for the Lord. So if someone is living in rebellion, it is unlikely that someone who is passionately following God would be drawn to them. This is why God often puts his children through a season of intense transformation before letting them meet the person he wants them to marry one day.

Since I’ve been running AGW University, I’ve gotten the chance to do email coaching with hundreds of students. As I read story after story from my students, it’s amazing to me how often God uses the pain of a relationship to draw people closer to him.

So if God is using a relationship rejection to increase your passion for growing in the Lord, this is a sign God is actually using that rejection as protection for you so you do not miss his will for your life by living in a lukewarm state of existence. The Lord will use this pain for your good and his glory if you let him, for as Psalm 34:18 (NIV) states, “The Lord is close to the brokenhearted and saves those who are crushed in spirit.”

(And on a quick side note, in a few weeks I will be sharing more information about open enrollment for AGW University. I have some new courses coming out to add to the courses I’m already offering for Christian singles who want to prepare their hearts for the relationship God might have for them. So in a few weeks you will have the chance to enroll at a reduced tuition cost while receiving even more resources than before, including the private email coaching with me. And don’t worry, if you are one of the hundreds of people who have already gone through AGW University, you will get free access to these new resources I’m releasing as well for no extra tuition cost since you already enrolled in the past. I will release more information about all this in the weeks ahead.)

3. If This Rejection Is Causing You to Reject Any Idols in Your Heart, This Is a Sign God Is Using This as Protection for You

Sometimes we don’t know we have an idol in our lives until someone tries to take it away. I remember when my dog Lois was a puppy. Before we got her she was living with all the other puppies in her litter and the previous owners would dump a bunch of food out on the floor for the pups and then they would all scramble to eat it.

When we first got her we obviously put her food in a dog bowl, but when I reached my hand down towards the bowl, my little new pup turned on me, started growing, and was nipping at my hand to keep me away from her food. She was used to fighting off others from her food because of how she used to be fed with all the other puppies.

In love, I made sure to work with her to stop her food aggression. I would purposefully take her food away from her while she was eating to show her I was her master and that I had control over her food. I would stick my hand in her food bowl while she was still eating so she would understand she couldn’t bite humans even if they were annoying her. And I made sure to do all this when she was a little puppy because I knew she would eventually be an 80-pound dog and if she bit me then I would be in trouble.

In love God often does the same things to us. He will expose an issue in our lives by taking it away from us, and he often tries to teach us these lessons early on so they don’t get worse later in life. You will learn a lot about how healthy or unhealthy you are with something by your reaction once it’s taken away. It’s healthy to be hurt and sad when a relationship is taken away from you. But an idol is being exposed if you enter into a season of being mad at God or if you start to experiencing an imbalanced depression that goes beyond healthy disappointment and grieving.

In Acts 19, Paul was preaching the gospel in Ephesus and some of the people there started giving up their false idols and no longer purchasing the statues of the false god there. But those who were not followers of Christ but followers of this false god were not ready to give up their idols. They feared that if Christianity spread, the temple of their god, the production of their idol statues, and the resources stemming from the selling of these statues would be taken away from them.

Because of this, these people clinging to their idols started a riot in Ephesus. In Acts 19:28-29 it states, “When they heard this they were enraged and were crying out, ‘Great is Artemis of the Ephesians!’ So the city was filled with the confusion, and they rushed together into the theater, dragging with them Gaius and Aristarchus, Macedonians who were Paul’s companions in travel.”

Likewise, when God takes away our idols, that’s when riots happen in our hearts. So if God is using a rejection to expose a relationship idol in your heart, be encouraged. God is doing this for your good. God knows he must remove the false relationship gods in our lives so he can then give us a true Christ-centered relationship that is focused on glorifying him.