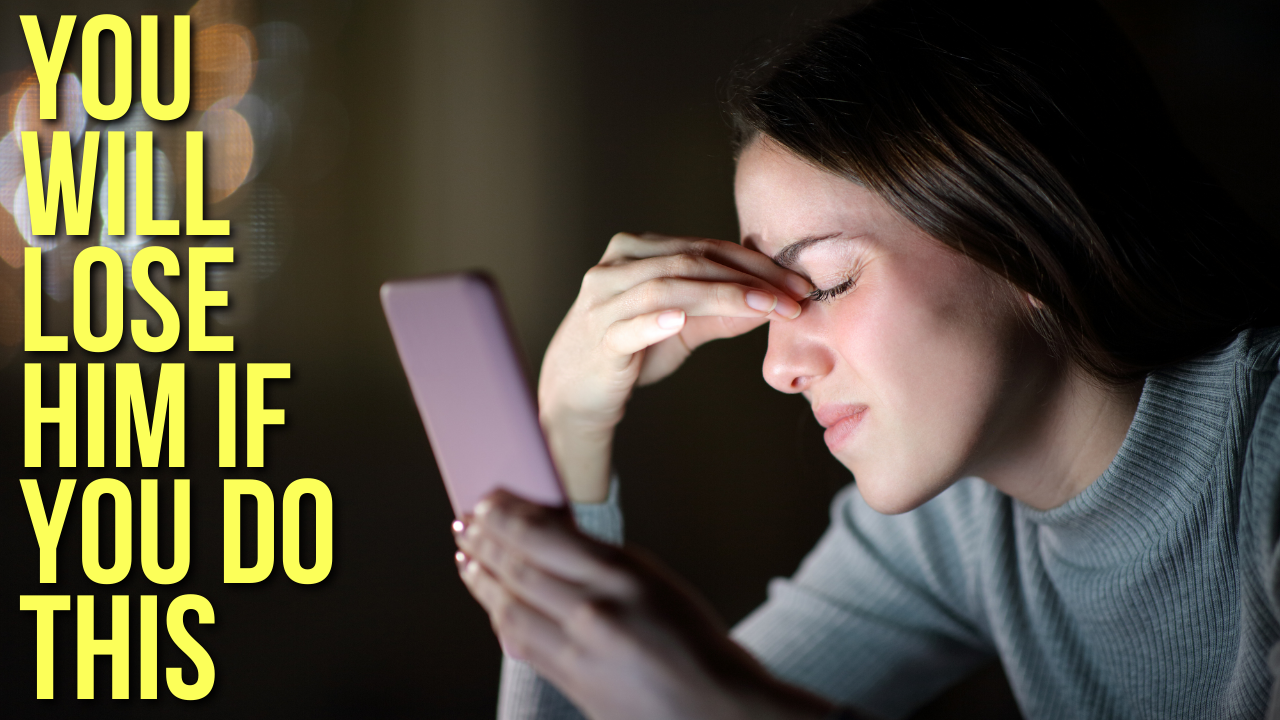 When a good guy comes into your life, there’s not a whole lot you need to do. Rather, as a woman, you need to resist the urge to interfere with his manhood. He doesn’t want a woman to come in and tell him how to be a man. Rather, because he’s already a good man, he wants a woman in his life so he can love her as the man God has already made him to be.

So as a woman, when you meet a good guy, many times it’s not about doing something to keep him but rather it’s more about not doing things that will push him away. In this article, I’m going to give you four things you should never do as a woman if a good guy is pursuing you.

1. Never Tell a Good Guy What to Do. Just Ask Him

How you express your needs to a good man will make all the difference. Many women have been hurt in previous relationships and then when they meet a good guy, they feel like they need to be assertive still to get what they want because men in their past were reluctant to love these women in the ways they wanted.

It’s good to tell him how you feel and what is important to you. It’s good to let him know if your missing something in the relationship. But never tell a good man what to do because this can come across as disrespectful and a man craves respect (Ephesians 5:33).

Always phrase it in a question. Telling a man what to do emasculates him and makes him feel weak. It makes him feel like you don’t think he could do the right thing if you just asked. But when you ask him a question, this implies that you believe he has the answer himself. Telling him implies he lacks something good and discourages him from doing what you say. Asking him implies you believe he possess the right stuff and encourages him to do what you’ve asked.

One of the most common issues that happens before marriage between men and women is the speed in which greater and greater commitment is offered. Of course this doesn’t always happen, but oftentimes the woman is ready for a commitment faster than the man is.

The woman often tries to solve this problem by expressing her desires with her words. She does this because she wants the man to know how she feels. If I was making this for men to know how to avoid pushing a good woman away, I would tell them they need to be more verbal. But this article is for women to know how to avoid pushing a good man away. Therefore, we need to remember that men are not as “feelings-focused” as women and are typically much more concerned with “what makes sense.”

Oftentimes a man feels just as strongly for the woman as the woman feels for the man, but the man needs time to check all the boxes logically. He’s not going to give into his feelings until he knows this relationship actually makes sense to him. And this can’t be rushed. It takes time (Song of Solomon 8:4) for the couple to properly assess each other and to make sure their lives, careers, theology, and goals are compatible (2 Corinthians 6:14).

Rather than telling a man you want him to commit, you have to show him why he should commit. If you are flakey in your commitment and loyalty to him, he’s going to take longer to want to commit to you. But if he sees you adding value to his life, being loyal, and being the type of woman he would want to marry, then his logic will release his feelings and he will commit more to you without you telling him.

3. Never Give an Ultimatum to a Good Guy. Live Your Life and Let Him Choose the Sacrifices He Wants to Make

You have to have standards for yourself and for the type of guy you want to end up with. But if a guy is not something you want him to be, it does you no good in telling him to change or else you are leaving him. Even if he does change for you, he will secretly resent you for forcing him to do something he did not choose to do himself. Never say:

These are all reasonable things for you to need a man to do for you. And as we talked about in point 1, you should ask him for what you want. But if you need to twist his arm to do something, all you are doing is building resentment in the relationship.

When you are dating, he’s not leading you. Leadership in a relationship is for husbands, not boyfriends (Ephesians 5:22-25). You don’t have to wait for him to be something he’s not. You should live your life and hold to the standards you have. If he’s not that guy, move on. He either meets your standards or doesn’t. And if he does love you enough to change something in his life, he will do this without you giving him an ultimatum.

If he won’t change without the ultimatum, he won’t really change anyways. He might fake it and do what you want. But he will only be able to fake it so long and eventually he will lash out at you for pushing him into something he doesn’t want. So even if he gives in to your ultimatum, you will just end up with a guy who resents you.

4. Never Try to Improve a Good Guy. Let Him Improve Himself Through His Relationship with You

We’ve all heard the old saying, “Behind every successful man is his wife.” We all like this saying because we know how much value a wife brings to a man. Without her, his life would be lacking a lot of good things that only she can offer.

All of that is true. But the problem with this idea is that we often think there’s a woman pulling all the levers behind a good man like he’s really just a bumbling idiot. Because of our modern’s society degradation of men, we find it easy to view successful men as puppets for even more successful women.

The truth is, a wife brings a lot of value to a godly man’s life. But he’s not dependent on her for everything, like she’s his counselor and personal life-coach in all matters of business and social decisions. A good man goes to a woman to give his masculine strength. He doesn’t go to her to find the strength he lacks. Notice what Proverbs 31:10-12 states:

An excellent wife who can find? She is far more precious than jewels. The heart of her husband trusts in her, and he will have no lack of gain. She does him good, and not harm, all the days of her life.”

Clearly a good wife is a huge blessing to a good man. But she’s not trying to change the man, improve the man, or micromanage the man. Rather, she is doing him good and not harm. Though it looks different, she’s bringing just as much value to the relationship as him. But she’s not improving the relationship by improving the man. Rather, she improves his life through her presence.

Don’t fall for the modern feminist lies that you are a man’s advisor or that it is your job to make him better. Bring value to his life through improving yourself as a woman. The better you are, the better he will be through his relationship with you.

If you want to attract a godly man, read this article next: 5 Biblical Things the Women Do Who All the Guys Want.