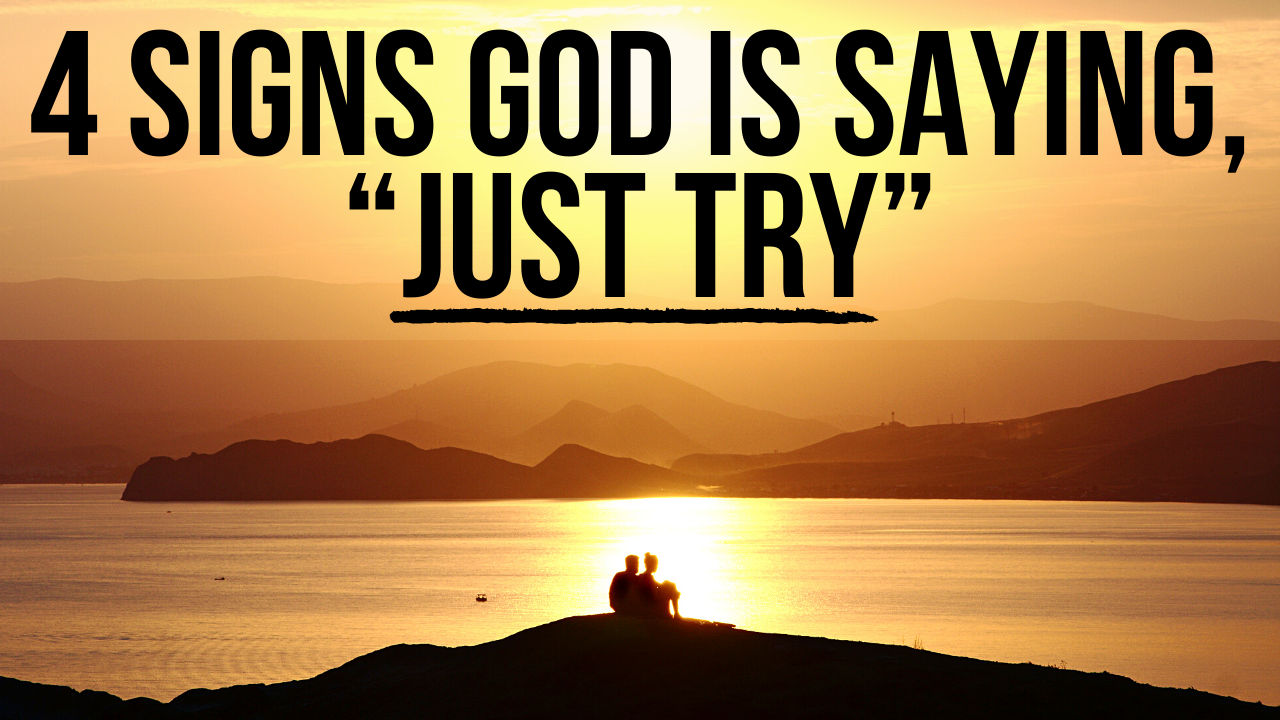 Sometimes you are confused because you are waiting too long for clarity. Here are 4 signs that often mean God is saying, “Just try.”

1. If You Want to Try Something that Is “Good” that Is Neither Proscribed or Prescribed in Scripture, Oftentimes God Is Saying, “Just Try”

But when you have to make an important decision that is not proscribed or prescribed in the Bible, there are some other important principles to consider, like:

So if you have a desire to do something good that is not forbidden in Scripture nor does it go against your conscience, God is often saying, “just try” what you want to try.

2. If You Have Two Opportunities But You Can Only Choose One, Oftentimes This Means God Is Saying, “Just Try”

Paul was constantly faced with making decisions on where he was going to serve. It was good to serve anywhere. But he had to make choices on where to go.

Notice what Paul said in Acts 18:20-21, “When they asked him to stay for a longer period, he declined. But on taking leave of them he said, ‘I will return to you if God wills,’ and he set sail from Ephesus.” But now notice what Acts 20:16 states, “For Paul had decided to sail past Ephesus, so that he might not have to spend time in Asia, for he was hastening to be at Jerusalem, if possible, on the day of Pentecost.”

In Acts 18:21, Paul refers to God’s will being the deciding factor on whether or not he would visit Ephesus again. But in Acts 20:16, it states, “Paul had decided” not to visit them. Is this a contradiction? No, it means that God’s will was for Paul to do what Paul wanted to do in this instance.

Sometimes God just gives us a personal desire to do something. So if you want to do something that is good, and God is not giving you a clear no, and you have the opportunity to do it, oftentimes this means you should just try it.

3. If the Cost of Failing Is Worth the Chance to Try, Oftentimes God Is Saying, “Just Try”

God is not opposed to humans taking risks. But he does want us to also be wise. A wise risk is a risk that has a worthwhile reward but a cost that is not too great to pay if it does not work out the way you hoped. Don’t try something that will completely end you if it doesn’t work out.

For example, if you are going to risk your relationship with God by getting into a relationship with someone who is not walking with God, hoping that you can turn this person towards Jesus so you both can honor the Lord together, this is not a wise risk because if you fail, the cost will be you turning from the Lord and choosing a person over God.

Notice how Paul tried to visit the Thessalonians but failed. 1 Thessalonians 2:18 says, “For we wanted to come to you—certainly I, Paul, did, again and again—but Satan blocked our way.” This does not mean Satan is more powerful than God. It means that God allowed Satan to block Paul because God wanted Paul to go somewhere else besides Thessalonica.

But Paul would never have known this unless he tried. Paul’s conscience was clean because he knew he really tried to visit them even though he was prevented. Likewise, it’s easier to look back and know that you tried and failed rather than having failed to try at all.

Here’s my advice, if you’re going to fail, fail gloriously! Of course be wise, pray, don’t do anything stupid. But why live a life full of regret? If you want to try something that could result in something good, try it!

4. If You Have to Make a Decision, God Is Probably Telling You to Make a Wise Plan and “Just Try” While Holding Your Plans Loosely

As Christians, we all obviously want to follow God’s plan for our lives. But God rarely just tells us what his future plans are. Therefore, it’s almost always a mistake to just wait forever until you know what will happen.

Rather, God often reveals his plan through us prayerfully trying our own plans, but then adapting our plans as God reveals new information.

Notice all the loose language Paul used when he was talking about his plans in 1 Corinthians 16:5-9, which states:

I will visit you after passing through Macedonia, for I intend to pass through Macedonia, and perhaps I will stay with you or even spend the winter, so that you may help me on my journey, wherever I go. For I do not want to see you now just in passing. I hope to spend some time with you, if the Lord permits. But I will stay in Ephesus until Pentecost, for a wide door for effective work has opened to me, and there are many adversaries.”

It’s not wrong to plan. Paul had a plan here. So pray, think, look at the pros and cons, and then make a wise plan. Then try that plan. But hold your plan loosely. Work into your plan phrases like “I intend to” and “perhaps I will” and “I hope to” and “if the Lord permits.”

If you don’t know what to do but you need to do something, God is probably telling you to make a prayerful, wise plan, and to then try it. Just hold it loosely and allow God to adjust your plan as you walk into his plan with him.