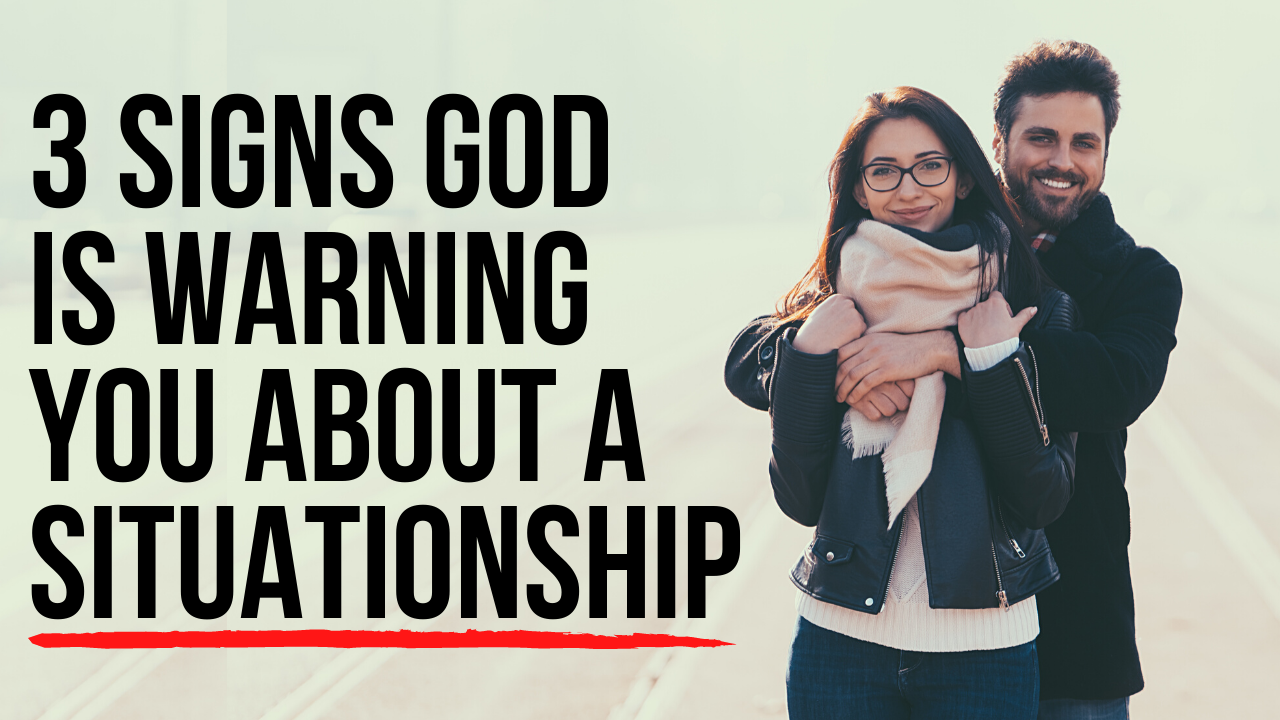 By the term “situationship,” I’m referring to that type of connection you have with someone that is more than a friendship but less than a committed relationship. You are not just friends but you are not a boyfriend and girlfriend either. There is obvious chemistry between you two but your connection remains undefined.

While every committed relationship has to start somewhere, which is usually a confusing season to go through, it’s very easy to allow a situationship to become unhealthy and hurtful.

So here are 3 signs God is warning you about a situationship.

1. If Someone Has Had Plenty of Chances to Take the Next Step with You But They Keep Falling Short on Their Implied Intentions, This Is a Sign God Is Warning You About an Unhealthy Situationship

One tactic many people implement when they want to use you for selfish reasons while not feeling bad about it in their own conscience is to never directly reveal their intentions but to imply them very clearly. They do this because they want you to feel like they are going to commit to you eventually but they also want to be able to say that they never made you any promises when they eventually hurt you.

For example, if a man asks a woman on a date and then asks her out on five more dates, this is implying that he is very interested in her. So if he just all of a sudden completely disappears and completely ghosts this woman, she has every right to feel hurt and confused. It’s true that he never said with his words that he was seriously interested in her, but after going on 6 dates together certainly the interest is implied.

Or let’s say a woman asks a man to be her date to a wedding she is going to. Certainly two friends can go to a wedding together and it doesn’t mean anything. But if she is hanging all over him and then asks him to be her date for another wedding she has to go to next week, it wouldn’t be crazy for this man to think she’s interested in him even though she has never actually said anything to him one way or the other. If this man then asks her out on real date after their two wedding dates, and she just starts blocking his calls, it would be appropriate for this man to feel led on because her actions certainly implied that she was interested.

I’m not saying anything against implied interest when it comes to singles. That’s a part of the process that needs to occur before a clear conversation happens that defines the relationship. My caution is that you should be suspicious of someone who has given you an abundance of implied interest but continues to avoid giving you a clear verbal statement that they want to commit to you in an official relationship.

Notice how negatively Solomon speaks about someone who implies everything without just speaking plainly. Proverbs 6:12-15 says:

A worthless person, a wicked man, goes about with crooked speech, winks with his eyes, signals with his feet, points with his finger, with perverted heart devises evil, continually sowing discord; therefore calamity will come upon him suddenly; in a moment he will be broken beyond healing.”

2. If Someone Wants to Take All They Can From You While You Two Have a Limited Amount of Time Together, This Is a Sign God Is Warning You About a Situationship

One environment where situationships form very easily is when two people come together for a specific period of time that both know will end soon. For example, if you decide to volunteer somewhere for the summer and you meet someone there, it’s possible you two really hit it off and spend lots of time together throughout the summer because of this shared experience of volunteering together. But what happens after summer?

If the relationship was real and healthy, the relationship between these two will just keep growing even after their shared experience ends. But if it was just a situationship, now that their summer volunteer positions are over the connection will fade. This same idea can be applied to relationships that happen at work, at college, or on a mission’s trip.

There’s nothing wrong with forming a strong connection with someone in environments that are temporal as long as one of two things happen: 1. You know this is just a short-term connection so you two guard your hearts and don’t allow yourselves to get your hopes up. Or 2. You two make plans to continue this relationship after this shared experience is over.

Things can turn toxic and unhealthy, however, when you want the best of both worlds. If you know this connection is going to end but you also want to fully experience everything you can together while you two are together, this opens you up to crossing unhealthy boundaries and getting hurt.

As Proverbs 11:15 (NLT) states, “There’s danger in putting up security for a stranger’s debt; it’s safer not to guarantee another person’s debt.” Debt occurs when we want something now that we will pay for later. When it comes to relationships, some people will want to use you now but they will be happy to just let you pay for this later. When you allow someone to use you in a situationship, it’s kind of like saying you are going to pay this person’s debt for them even though they are still basically a stranger to you.

So if God is showing you that this person does not really want to continue a relationship with you in the future but really just wants to fully use you while you two still have time together, this is a sign the Lord is trying to warn you about an unhealthy situationship.

3. If Someone Is Keeping You in a Little Box and Not Opening the Rest of Their Life to You, This Is a Sign God Is Warning You About a Situationship

Notice how the woman in Proverbs 7:18-19 is acting differently towards this man because her husband is not around. It states:

Come, let us take our fill of love till morning; let us delight ourselves with love. For my husband is not at home; he has gone on a long journey; he took a bag of money with him; at full moon he will come home.”

If someone is showing interest in you but they are also working really hard to keep you in only one little box in their life rather than opening the rest of their life to you, this is a clear sign God is warning you about an unhealthy situationship.