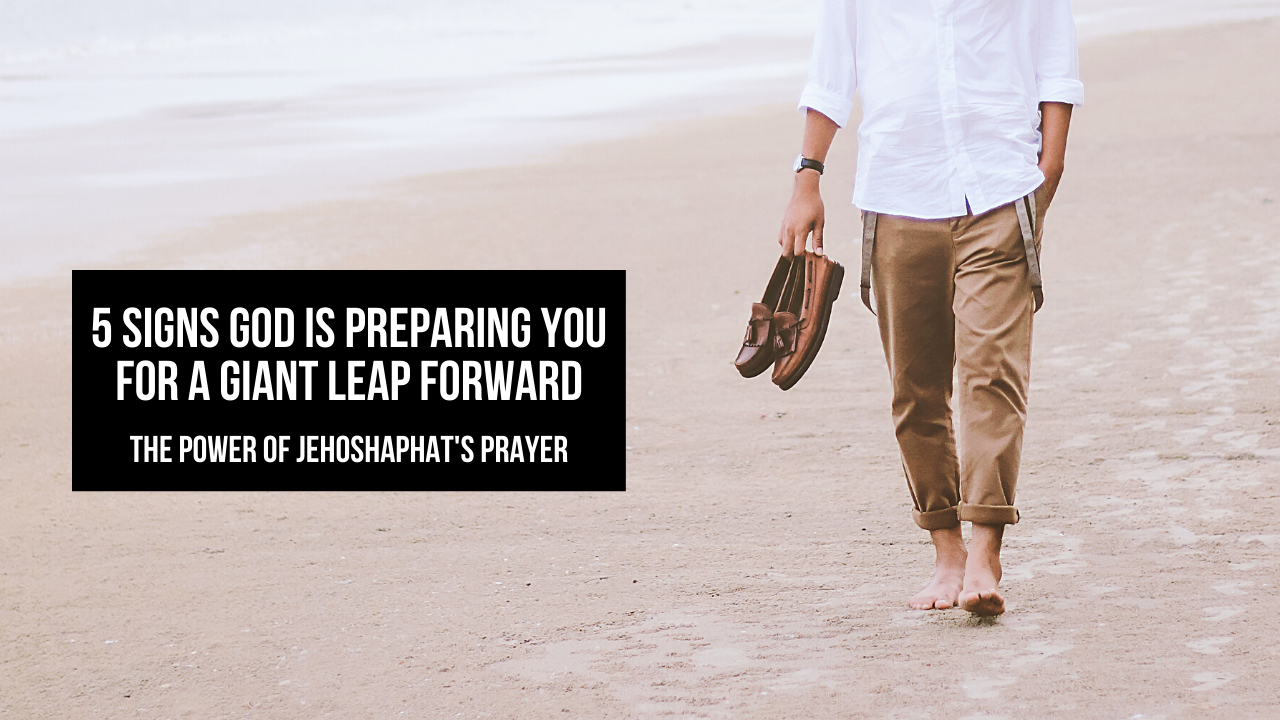 At most points in life, God will create massive change in our lives by empowering us to make small changes every day. Through discipline and consistently submitting to the Lord, over the years God radically transforms us.

But there are certain times in life where God causes us to make huge leaps forward with him that happen very suddenly.

So here are 5 signs that often happen to prepare you for a giant leap forward in a particular area of your life.

1. God Is Preparing You for a Giant Leap Forward If He Is Allowing a Life-Changing Obstacle to Come Into Your Life

Traumatic events will always change you. How they change you depends on how you respond to them. When you look back, they will either be your crash site where your life completely fell apart or they will be your launching pad where God completely transformed you in a dramatic way. But when something deeply painful, traumatic, or distressing occurs in your life, it will change you one way or the other.

Notice how these principles can be seen in 2 Chronicles 20. Things are humming along for King Jehoshaphat until one day he gets a sudden message that his kingdom is under a massive attack. 2 Chronicles 20:2-4 explains:

Some men came and told Jehoshaphat, ‘A great multitude is coming against you from Edom, from beyond the sea; and, behold, they are in Hazazon-tamar’ (that is, Engedi). Then Jehoshaphat was afraid and set his face to seek the Lord, and proclaimed a fast throughout all Judah. And Judah assembled to seek help from the Lord; from all the cities of Judah they came to seek the Lord.”

God used this huge obstacle coming against King Jehoshaphat and Judah as a way of motivating them to seek him like never before. This great horde could have completely destroyed them. But as you will see in the next point, because they turned to the Lord wholeheartedly through this extreme trial, God used this situation to cause them to take a giant leap forward.

As God said in Jeremiah 29:13, “You will seek me and find me, when you seek me with all your heart.” Sometimes God allows a huge obstacle to come into our lives to prepare us for a monumental transformation that comes after we seek the Lord with all of our hearts.

2. If God Has Allowed Something to Happen in Your Life that Has Crystalized Your Deep Need for Christ Alone to Save You in Every Way, This Is a Good Sign God Is Preparing You to Take a Giant Leap Forward

The world tells us to try harder in our own strength if we need a huge change to occur. But God says that to truly take a giant leap forward in your life, you have to completely let go of all your self-striving and totally throw yourself onto the mercy of God for your every need.

Ultimately this is most true when it comes to our salvation. Apart from Jesus Christ, there is no hope to be saved from our sins. To be saved, we must first fully come to grips with our own inability to save ourselves (Ephesians 2:8-9). But this principle must not stop at our salvation. Everything else we need in life will also only be given to us by the lavish grace and power of our Lord Jesus Christ. It’s hard to let go of our belief that we need to save ourselves. Therefore, God often puts us in impossible situations so that we will realize we are totally dependent on the immeasurable power of God.

When you keep reading in 2 Chronicles 20, Jehoshaphat and all of Judah quickly realize that this massive army coming against them is far too great for them to defeat in their own power. This causes them to fully throw themselves on the mercies of God. In 2 Chronicles 20:12 Jehoshaphat prays, “O our God, will you not execute judgment on them? For we are powerless against this great horde that is coming against us. We do not know what to do, but our eyes are on you.”

This has to be your prayer too if you want to overcome the trials of life. We can’t do it on our own. But when we can fully admit that we are powerless and in need of God’s power, it is then that God causes huge leaps forward to occur in our lives.

3. If You Have No Choice But to Take an Action Step in Faith, This Is Often a Sign God Is Preparing You for a Giant Leap Forward

Notice what God told King Jehoshaphat and Judah to do after they fully depended on him. 2 Chronicles 20:13-17 states:

Meanwhile all Judah stood before the Lord, with their little ones, their wives, and their children. And the Spirit of the Lord came upon Jahaziel the son of Zechariah, son of Benaiah, son of Jeiel, son of Mattaniah, a Levite of the sons of Asaph, in the midst of the assembly. And he said, ‘Listen, all Judah and inhabitants of Jerusalem and King Jehoshaphat: Thus says the Lord to you, “Do not be afraid and do not be dismayed at this great horde, for the battle is not yours but God’s. Tomorrow go down against them. Behold, they will come up by the ascent of Ziz. You will find them at the end of the valley, east of the wilderness of Jeruel. You will not need to fight in this battle. Stand firm, hold your position, and see the salvation of the Lord on your behalf, O Judah and Jerusalem.” Do not be afraid and do not be dismayed. Tomorrow go out against them, and the Lord will be with you.’”

It’s easy to focus on God’s promise to win this battle for them. But notice that after each time God promised that he would win this fight for them, he also tells them to take an action step themselves. He said “the battle is not yours but God’s.” But then he immediately also said, “Tomorrow go down against them.” He said, “You will not need to fight in this battle.” But then he also immediately said, “Stand firm, hold your position . . .” and again “Tomorrow go out against them, and the Lord will be with you.”

The point I’m making is that sometimes God lets you get completely backed up against a wall where you have to do two things at the same time. You need to fully trust that God alone is the one who can win this battle for you and you also need to take an action step.

When you have no other choice but to act and trust that God will deliver you, this is often a sign the Lord is preparing you for a giant leap forward.

4. God Is Preparing You for a Giant Leap Forward When You Learn to Worship Before You Experience the Win

From a worldly perspective, it is completely foolish to celebrate before you experience the victory. Can you imagine how strange it would be for a city to throw a Superbowl parade before the game even took place? But when we are heavenly minded, we know that no matter what happens, the ultimate victory is already ours in Christ Jesus.

Again, this truth primarily relates to our salvation. Though we struggle on this earth, as Christians we know our eternal destination is already secured in Jesus (Colossians 3:1-4). But this principle must also affect us in this life too. I’m not saying that you should “name and claim” everything you want God to give you and just act like God is for sure going to give you the blessings you are asking him for. He may or may not give you those certain things you really want.

But through it all God calls us to worship him before the battles even take place as a sign of faith that we know our God always wins and accomplishes his will. Notice this theme of worshipping God even before the victory manifests found in 2 Chronicles 20:18-23, which says:

Then Jehoshaphat bowed his head with his face to the ground, and all Judah and the inhabitants of Jerusalem fell down before the Lord, worshiping the Lord. And the Levites, of the Kohathites and the Korahites, stood up to praise the Lord, the God of Israel, with a very loud voice.

And they rose early in the morning and went out into the wilderness of Tekoa. And when they went out, Jehoshaphat stood and said, ‘Hear me, Judah and inhabitants of Jerusalem! Believe in the Lord your God, and you will be established; believe his prophets, and you will succeed.’ And when he had taken counsel with the people, he appointed those who were to sing to the Lord and praise him in holy attire, as they went before the army, and say,

‘Give thanks to the Lord,
for his steadfast love endures forever.’

Before the win, the people worshiped. If you withhold your worship until God gives you the victory, you will never experience the victory in Christ. God calls us to fully commit our hearts to him even when we are facing impossible odds.

When you learn to worship before you get the win, you are being prepared to take a huge leap forward with the Lord.

5. God Is Preparing You for a Giant Leap Forward When He Teaches You to Receive That Which You Did Not Earn

Through putting our faith in Jesus Christ alone for salvation, God saves us by his grace alone. To experience the saving power of the gospel, you must learn to receive that which you did not earn.

But this principle really applies to all aspects of life because according to James 1:17, everything good ultimately comes from God. Notice how God dramatically changed things for Jehoshaphat and Judah in 2 Chronicles 20:24-25 by blessing them with things they did not earn themselves:

When Judah came to the watchtower of the wilderness, they looked toward the horde, and behold, there were dead bodies lying on the ground; none had escaped. When Jehoshaphat and his people came to take their spoil, they found among them, in great numbers, goods, clothing, and precious things, which they took for themselves until they could carry no more. They were three days in taking the spoil, it was so much.”

Notice how this experience in 2 Chronicles 20 ultimately brought God more fame, “And the fear of God came on all the kingdoms of the countries when they heard that the Lord had fought against the enemies of Israel. So the realm of Jehoshaphat was quiet, for his God gave him rest all around” (2 Chronicles 20:29-30).

When you fully know the good you seek from God is good you don’t deserve, you are actually increasing your ability to receive God’s blessing because you are allowing God to receive all the glory.