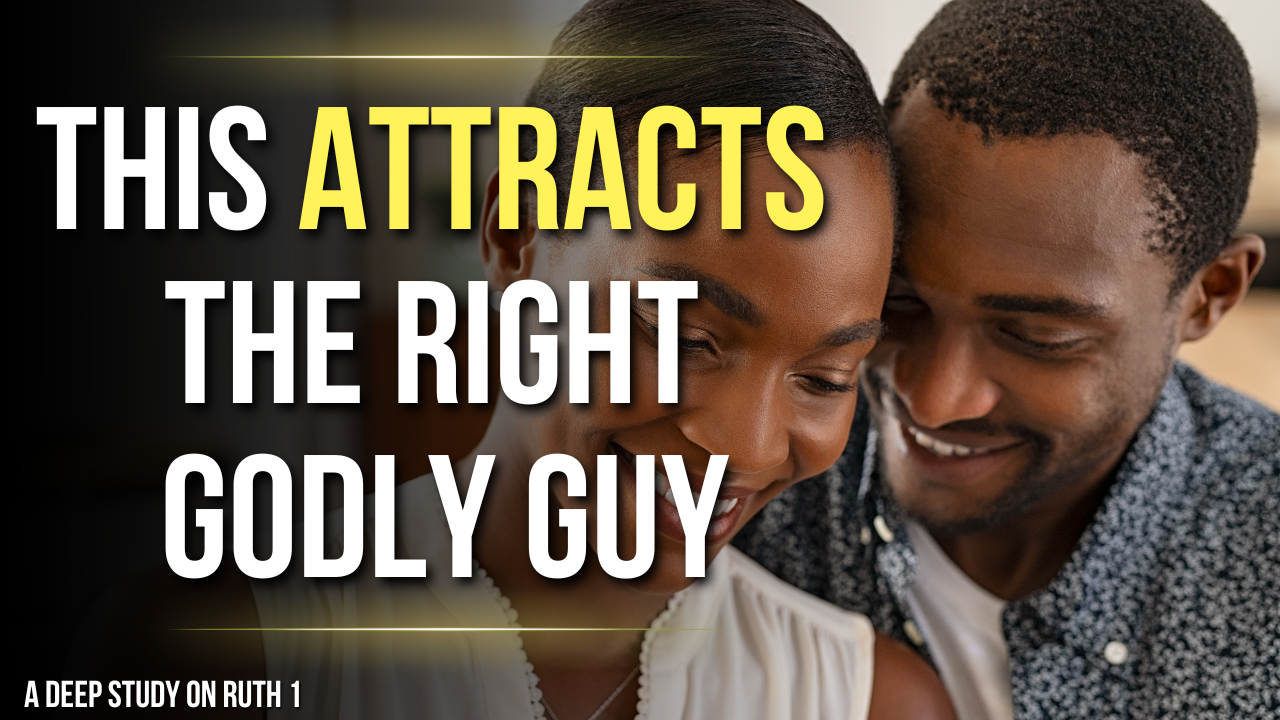 Are you a Christian single woman who hopes to have a great relationship with your future godly husband one day? If so, this isn’t going to happen by accident. You actually have to start preparing for this outcome right now.

One Bible passage that details the qualities a man wants in his future wife is Ruth 1. As we read this chapter together, we will create 5 principles that we can then apply to this topic of how to prepare for a great relationship with your future husband.

Passage: Ruth 1:1-5, “In the days when the judges ruled there was a famine in the land, and a man of Bethlehem in Judah went to sojourn in the country of Moab, he and his wife and his two sons. The name of the man was Elimelech and the name of his wife Naomi, and the names of his two sons were Mahlon and Chilion. They were Ephrathites from Bethlehem in Judah. They went into the country of Moab and remained there. But Elimelech, the husband of Naomi, died, and she was left with her two sons. These took Moabite wives; the name of the one was Orpah and the name of the other Ruth. They lived there about ten years, and both Mahlon and Chilion died, so that the woman was left without her two sons and her husband.”

Principle: Learn from women who have what you want.

Practical Application: Ruth was a Moabite woman, which means she grew up in an extremely wicked environment. Everywhere she looked, she was surrounded by other men and women who were worshipping false gods. Jeremiah 48:29 states, “We have heard of the pride of Moab—he is very proud—of his loftiness, his pride, and his arrogance, and the haughtiness of his heart.”

Therefore, Ruth must have noticed something different about Naomi. Before Naomi lost her husband and her sons, something about her was extremely attractive to Ruth. Why else would she commit herself to Naomi so passionately?

As you will see by reading about what happened between Ruth and Boaz (Ruth 3-4), Naomi’s counsel was very pivotal. Without Naomi in Ruth’s life, she would have ended up just like every other Moabite woman.

Likewise, if you want to avoid ending up like the women you see all around you – women who are preaching self-sufficiency while simultaneously crying about their loneliness, women who are sleeping around before marriage while also wanting a committed man in marriage, women who have abortions and then become sad later in life that they have no children, women who are disrespectful towards men but want a man to cherish them – then you need to learn from women who already have what you want one day.

Passage: Ruth 1:6-14, “Then she arose with her daughters-in-law to return from the country of Moab, for she had heard in the fields of Moab that the Lord had visited his people and given them food. So she set out from the place where she was with her two daughters-in-law, and they went on the way to return to the land of Judah. But Naomi said to her two daughters-in-law, ‘Go, return each of you to her mother’s house. May the Lord deal kindly with you, as you have dealt with the dead and with me. The Lord grant that you may find rest, each of you in the house of her husband!’ Then she kissed them, and they lifted up their voices and wept. And they said to her, ‘No, we will return with you to your people.’ But Naomi said, ‘Turn back, my daughters; why will you go with me? Have I yet sons in my womb that they may become your husbands? Turn back, my daughters; go your way, for I am too old to have a husband. If I should say I have hope, even if I should have a husband this night and should bear sons, would you therefore wait till they were grown? Would you therefore refrain from marrying? No, my daughters, for it is exceedingly bitter to me for your sake that the hand of the Lord has gone out against me.’ Then they lifted up their voices and wept again. And Orpah kissed her mother-in-law, but Ruth clung to her.”

Principle: Choose the best spiritual path even when it’s not the easiest earthly path.

Practical Application: After all the men in their family died and Naomi decided to return to Bethlehem, she told her daughters-in-law that it would be better for them to stay in Moab. And her warning to her daughters-in-law was true. It made no earthly sense for them to stay with her and leave their homeland. Being a widow would be hard enough. Being a widow from a foreign land and surrounded by people who have no national allegiance to help you is much harder. At least in Moab these women had other family who could help provide for them. By going to Bethlehem, they would be making their bad situation even worse.

But notice what it says in Ruth 1:14, “but Ruth clung to her.” Orpah made the wise decision by earthly standards. But Ruth made the right decision by spiritual standards. She left that godless nation and chose to follow the one true God.

Ruth was making good spiritual choices before she even met Boaz. It’s not realistic to wait to become godly only once you meet a godly man. First off, a godly man will want a woman who is already living like he is (Ruth 2:11-12). Secondly, spiritual maturity takes time to develop. If you start choosing the best spiritual path now even when it’s not the easiest earthly path, you will be prepared for a spiritually healthy marriage one day.

Passage: Ruth 1:15-18, “And she said, ‘See, your sister-in-law has gone back to her people and to her gods; return after your sister-in-law.’ But Ruth said, ‘Do not urge me to leave you or to return from following you. For where you go I will go, and where you lodge I will lodge. Your people shall be my people, and your God my God. Where you die I will die, and there will I be buried. May the Lord do so to me and more also if anything but death parts me from you.’ And when Naomi saw that she was determined to go with her, she said no more.”

Practical Application: Eventually Ruth became Boaz’s loyal wife. But before she did, she was developing her loyalty through other areas of her life. Loyalty is not something you are born with. Loyalty is something you have to develop. Ruth was a “determined” woman (Ruth 1:18), and this trait later benefitted her once she met Boaz.

There’s nothing more attractive to a man than a woman who is loyal to him (Ruth 3:10). To be a loyal woman means you reject other men and you keep supporting this one man even when he is going through hard times. You have to go through his poor seasons and his seasons of wealth. You have to stay faithful when his mental health is bad and when it is good. Through loyalty, you get to experience his losses and his victories. If you do this for him, he will love you with all of his heart.

But again, loyalty is something you have to develop. It’s extremely hard, which is why it’s so hard for men and women to find a loyal companion. When we cheat at work, when we lie to our friends, or when we abandon people in times of need, we are training ourselves to take the easiest path in life. When you get married, you will just keep doing what you’ve trained yourself to do.

If you want a godly husband to love you with all his heart, you have to be a loyal woman.

Passage: Ruth 1:19-21, “So the two of them went on until they came to Bethlehem. And when they came to Bethlehem, the whole town was stirred because of them. And the women said, ‘Is this Naomi?’ She said to them, ‘Do not call me Naomi; call me Mara, for the Almighty has dealt very bitterly with me. I went away full, and the Lord has brought me back empty. Why call me Naomi, when the Lord has testified against me and the Almighty has brought calamity upon me?”

Principle: Let God transform you through the pain you go through.

While this passage is talking about Naomi, it’s clear Ruth has gone through immense pain too. She lost her husband, she lost her home, and now she was in a strange land without any idea of how she would survive. Like Naomi, Ruth was suffering. But Naomi didn’t stay in that bitter place forever. Actually God used this pain to bring her even more joy than she had originally lost (Ruth 4:14-17). Likewise, Ruth had to go through something extremely terrible before getting to experience something even better.

Pain will change you. How it will change you depends on how you respond. Will you abandon the Lord? Or will you push forward and be blessed like Ruth?

Passage: Ruth 1:22, “And they came to Bethlehem at the beginning of barley harvest.”

Principle: You will form relationships with the type of people you surround yourself with.

Practical Application: Ruth never would have met Boaz if she didn’t first move to Bethlehem. God made relationships to form between people when they spend time together. It’s impossible to spend time with someone and not form a relationship with them. This principle can be used for good and evil in your life.

If you spend time around men who love sexual sin, breadcrumb you, and who don’t love Jesus, you will always be in a relationship with a man who has these types of qualities. If you want to be a in great relationship with a godly man one day, you first need to get into a community that actually has godly men in it. Not every godly man you meet in that community will become your future husband. But this principle remains that you will form relationships with the type of people you surround yourself with.

Ruth only met her Boaz once she moved to Bethlehem. If you want to meet your Boaz, pray about where God may be leading you to build a godly community at.