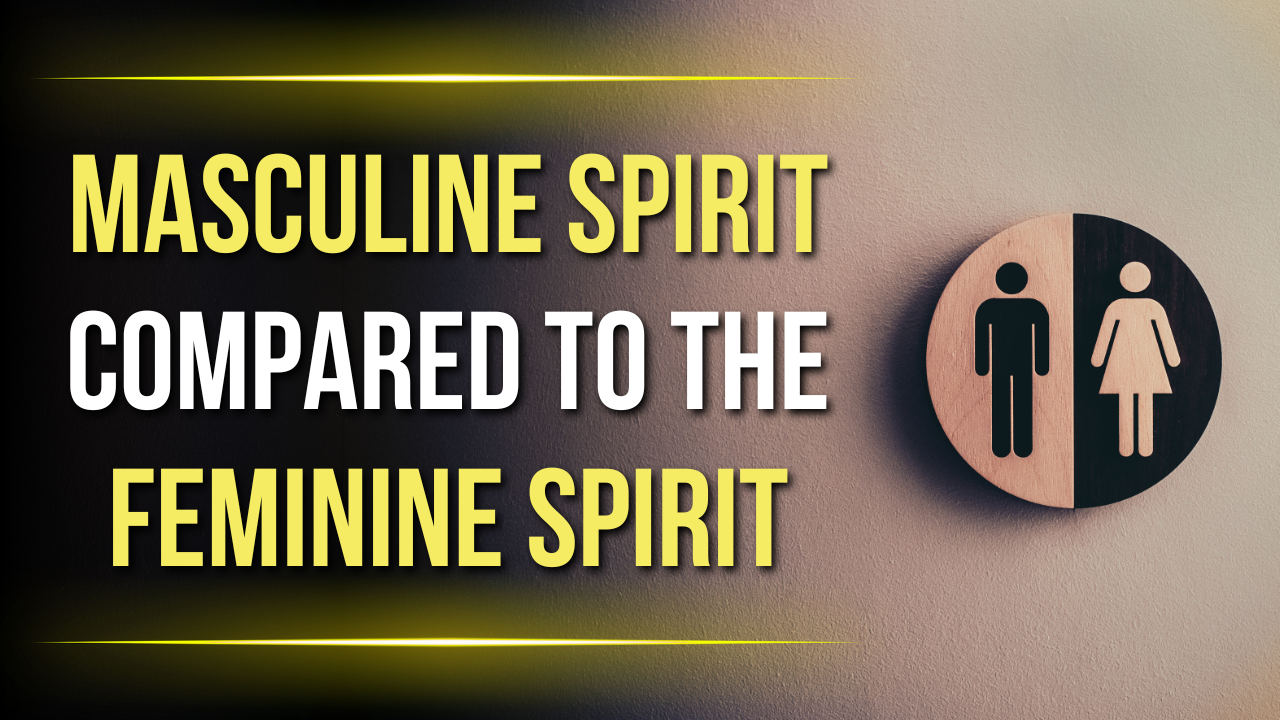 When I use the word “spirit” in this article, I’m not talking about a force or the spiritual realm. Rather, I’m using this word “spirit” to mean an attitude, characteristic, or the immaterial parts of a person.

So to help us do that, here are four biblical differences between the masculine and feminine spirit.

In the relationship between Christ and the church, who is the initiator and pursuer? Christ. But as God’s people, we invite Christ to pursue us and respond to his initiation by inviting more of his pursuit. For 1 John 4:19 states, “We love because he first loved us.”

Another way to see this is the in the general order that physical attraction occurs between a husband and wife in sex. Primary the woman’s body attracts the man’s body. The wife’s femininity arouses the man’s masculinity.

Men and women are free to breakdown the tasks required for living, like housework and making money, in whatever way they feel best suits their gifts. Oftentimes there is a common breakdown of women taking care of the physical house more and the men literally going out of the house to “hunt” for the material needs they have.

You can even see this principle in the couple’s selection of chores. A man will typically take care of the chores outside the home like mowing the grass, landscaping, and repairs on the home while the woman often prefers to take care of the chores inside the house. And this often happens because of the way God designed men and women in their gifting and physical abilities.

However, I’m not saying women who work can’t be feminine and men who have wives who work can’t be masculine. I’m simply stating that the God given responsibility of provision lands first on the man (Ephesians 5:25-30), and the God given responsibility for managing what the man brings home first lands on the woman (Ephesians 5:22-24). As Christ gives to the church to nourish and care for her, so too a man must give to the woman (Ephesians 5:29). And as the church “submits” to the provision of Christ and manages well the gifts he gives, so too must the woman receive what the man provides and steward it well for the health of their home.

We live in a relatively safe society, so to our modern minds it’s difficult to understand the masculine as the protector and the feminine as respecting the man’s protection. But imagine a society where there are no laws protecting employees and no penal punishments for physical abuse. In the past, this would not be hard to imagine because this is what most men and women have lived in throughout human history. When there are no consequences for abuse, bad men always abuse women.

And this is exactly why women have been so abused and mistreated over the centuries. When there is not a societal arm of provision and protection, it becomes a necessity for a woman to find protection and provision from a male in her life, usually her father or husband. Why? Because other men will violate her if she doesn’t have another man to protect her.

In the past, resources needed to survive were simply controlled by the most violent people with the physical strength to take these resources from others. Thus all the resources were controlled by men because men are physically stronger than women. In the past, finding a good man wasn’t just about emotional needs getting met but also protection from violent men who want to rape and abuse women. A good man was a protection against bad men. Our society has laws, courts, and police to now ensure the physical safety of women.

All that to say, in the relationship, God still views the man as the protector even if our modern minds struggle to grasp this because we lack the physical examples of this now. And this masculine spirit of protection is still desired by women in a man.

But to be protected by someone, you have to respect their authority. A woman has the freedom to choose to disobey and reject a man’s protection, thus disrespecting his role as the protector. Notice when it states, “Wives, submit to your husbands,” (Ephesians 5:22), this was directed to the wives themselves, proving it is their choice. There’s not one verse in the Bible that states, “Husbands, make your wives submit.” The Bible tells husbands to die for their wives, not enslave them (Ephesians 5:25).

But when the woman does not submit to the man’s sacrifice, she removes herself from his protection. If she does not respond to his protection with respect, meaning she rejects his protection, she is then no longer expressing the feminine spirit and is taking herself out of the protective reach the man is supposed to give.

You can see this when it comes to the disappoint around special occasions. A man isn’t going to complain to his guy friends if the woman doesn’t get him the gift he wanted, doesn’t take him to the right restaurant, or didn’t say the right words. But women will be disappointed if a man doesn’t do these things for her. A man will complain about the woman if he tries to make her happy but she doesn’t respond with gratitude.

Again, it comes back to the pursuing versus responding roles. The masculine spirit seeks to lead while the feminine spirit seeks to respond. I believe this is why Paul concluded his instructions about marriage with the words, “However, let each one of you love his wife as himself, and let the wife see that she respects her husband” (Ephesians 5:33).

Here’s a 4-part video series through the book of Ruth which unpacks more biblical differences between men and women in relationships: A Bible Study About Relationships Through the Book of Ruth.