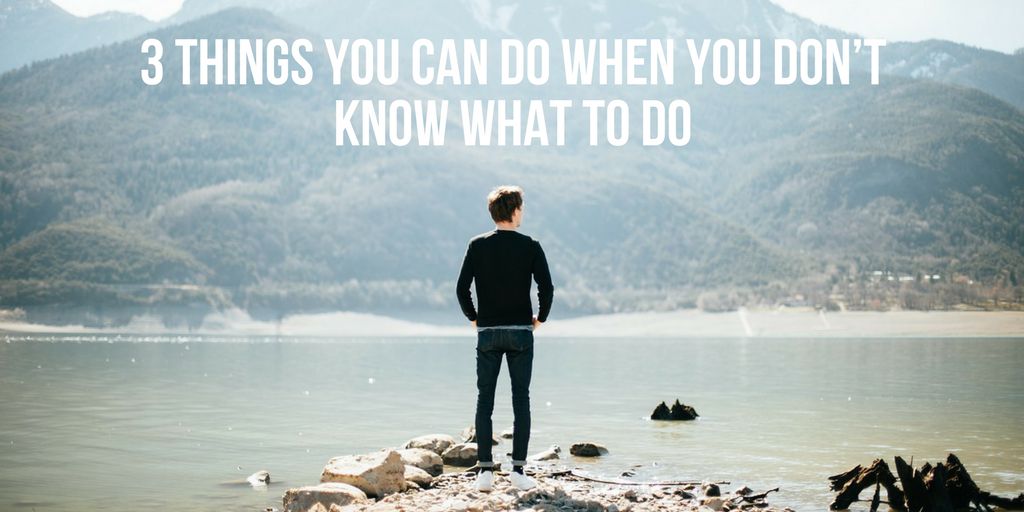 What should you do when you don’t know what to do? What counsel does the Bible give us when we are confused about life, a relationship, or about why something painful has happened to us?

There are many examples of confusing, hurtful times in the lives of those people recorded in Scriptures. Perhaps some of the lowest days and confusing times occurred for those Christ followers who experienced those days between the death and resurrection of Jesus Christ. Certainly they did not know what to do once their Messiah was murdered.

Do What You Do Know to Do

It was the day of Preparation, and the Sabbath was beginning. 55 The women who had come with him from Galilee followed and saw the tomb and how his body was laid. 56 Then they returned and prepared spices and ointments. On the Sabbath they rested according to the commandment.” (Luke 23:54-56)

I admire how these women responded in the face of deep sadness and confusion. They must have been so perplexed at this point. They had been following Jesus, they had been expecting Jesus to lead them forever, but now their Messiah was dead in the tomb. They had been taught God’s laws but now it seemed their God was dead. So now what?

You just need to do what you do know. While there are many things we don’t know, we all know something. Those who keep following God throughout their life are those who are focusing on doing the next right thing. They are not derailed by the fog clouding their future. Rather, they gain clarity by simply doing the good they do know to do even when they don’t know everything.

Plan What You Can, But Don’t Wait for Perfection

But on the first day of the week, at early dawn, they went to the tomb, taking the spices they had prepared. 2 And they found the stone rolled away from the tomb, 3 but when they went in they did not find the body of the Lord Jesus. (Luke 24:1-3)

Again, I appreciate the faithfulness of these women to just do the simple things during a time of complexity and confusion. I respect that these women did not know what was going to happen in their future and yet they “prepared” the spices, they stayed together with other women who believed the same thing, and they wanted to honor their Lord. Mark 16:2-4 gives us even more insight into this scene:

And very early on the first day of the week, when the sun had risen, they went to the tomb. 3 And they were saying to one another, “Who will roll away the stone for us from the entrance of the tomb?” 4 And looking up, they saw that the stone had been rolled back—it was very large.”

They did not know how they would roll away the stone. So what did they do? They started walking anyway. They had a plan, but their plan was not perfect and they knew it. They did what they could and accepted the unknowns for what they were. They didn’t let an imperfect situation stop them from planning what they could do.

When you don’t know what to do, you should make a plan to do what you can. We get stuck when we think we need everything figured out before we can do anything. You may not know everything, and you may not be able to do everything, but you can always do something good. Even if it is a small action, just plan to do what you can and go do it even if the plan has holes in it. The women could have just stayed home and prepared nothing because of the stone, but they didn’t let one roadblock in the future stop them from doing what they were able to do in the present.

You don’t know the future. You don’t know what might happen 20 steps from now. God provided a way for the stone to be rolled away, but the women would never have experienced this heavenly provision if they did not faithfully do what was in their power to do.

So make a plan, but don’t expect perfection. Do what you can, and let God worry about providing for what you cannot do. We sin when we do not do what we are able to do because we are looking at what we are not able to do. Sometimes you won’t experience the miracle because you don’t even get that far in the journey to reach the obstacle. How do you know God won’t provide away across the chasm if you never reach the edge of the cliff?

You don’t know the future, so be faithful in the present and let God worry about the future.

4 While they were perplexed about this, behold, two men stood by them in dazzling apparel. 5 And as they were frightened and bowed their faces to the ground, the men said to them, “Why do you seek the living among the dead? 6 He is not here, but has risen. Remember how he told you, while he was still in Galilee, 7 that the Son of Man must be delivered into the hands of sinful men and be crucified and on the third day rise.” 8 And they remembered his words,9 and returning from the tomb they told all these things to the eleven and to all the rest. 10 Now it was Mary Magdalene and Joanna and Mary the mother of James and the other women with them who told these things to the apostles, 11 but these words seemed to them an idle tale, and they did not believe them. 12 But Peter rose and ran to the tomb; stooping and looking in, he saw the linen cloths by themselves; and he went home marveling at what had happened.” (Luke 24:4-12)

So what should you do when you don’t know what to do? Whenever doubts fill our minds, we must always, always, always remember the resurrection of Jesus Christ.

Death was the ultimate problem every human faced without any hope of solving it on our own. The resurrection of Christ is the solution humanities deepest problem. Therefore whatever else you face in life, you can always be confident that God can provide a way forward because God raised Jesus from the dead. If he can do that, he can do anything.

The main reason, however, that we should always remember the resurrection because through Jesus we have new life. We will experience many challenges and confusing times on earth, but through God’s resurrection power he has enabled us to endure and thrive even in the midst of the pain and problems. Because we have a new nature, we need not sin when hard times come:

We were buried therefore with him by baptism into death, in order that, just as Christ was raised from the dead by the glory of the Father, we too might walk in newness of life.” (Romans 6:4)

When you don’t know what to do, remember what God has done for you. Remember who you are because of Jesus’ resurrection. Because he lives, we can face anything even when we don’t have all the answers.