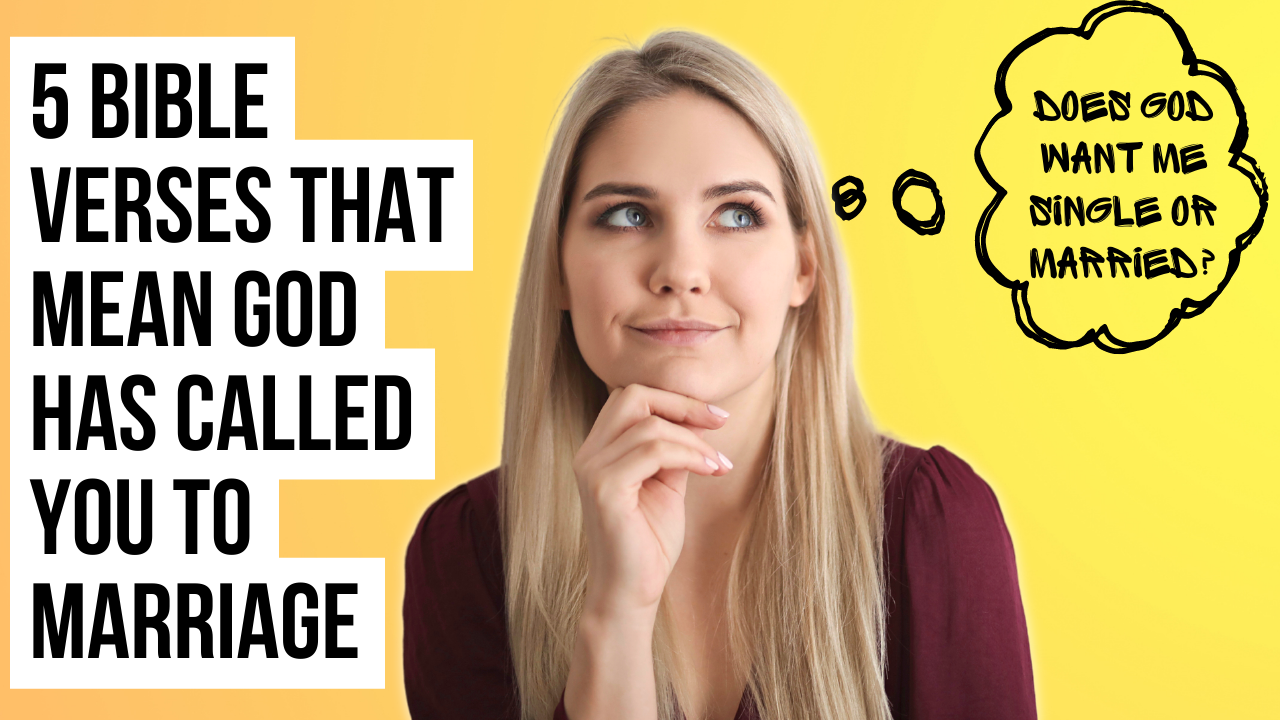 What does the Bible say about being called to marriage? If these five Bible passages apply to you, this means God is calling you to pursue marriage.

1. If Your Only Reason for Remaining Single Is Religious Duty, 1 Timothy 4:1-5 Says You Should Pursue Marriage

1 Timothy 4:1-5, “Now the Spirit expressly says that in later times some will depart from the faith by devoting themselves to deceitful spirits and teachings of demons, through the insincerity of liars whose consciences are seared, who forbid marriage and require abstinence from foods that God created to be received with thanksgiving by those who believe and know the truth. For everything created by God is good, and nothing is to be rejected if it is received with thanksgiving, for it is made holy by the word of God and prayer.”

One sign of unhealthy, manmade religious ideas is restrictions. God certainly has rules in the Bible that tell us not to do things. But God’s rules are not about restricting us. They are about protecting us as we advance in joy through Christ (2 Timothy 3:16-17).

The Bible has laws in it, but these laws are not there to save us. We are saved through grace alone (Ephesians 2:8-10). We are free in Christ and are warned to not be enslaved by laws anymore (Galatians 5:1). But, again, this doesn’t mean God’s laws are now useless. Rather, we are to freely follow these laws because they protect us from hurting ourselves.

Manmade religious rules don’t accomplish this purpose of protection (Colossians 2:22-23). Manmade religious laws restrict our freedom in Christ and diminish the joy God wants us to have as we embrace his gifts to us, like marriage. If you are trying to resist God’s call to pursue marriage because you have been wrongly taught that marriage is not a gift from God to be enjoyed by those who want this gift, 1 Timothy 4:1-5 means you should pursue marriage.

2. If a Commitment to Singleness Will Tempt You to Abandon Your Commitment to Christ, 1 Timothy 5:9-12 Says You Should Pursue Marriage

1 Timothy 5:9-12, “Let a widow be enrolled if she is not less than sixty years of age, having been the wife of one husband, and having a reputation for good works: if she has brought up children, has shown hospitality, has washed the feet of the saints, has cared for the afflicted, and has devoted herself to every good work. But refuse to enroll younger widows, for when their passions draw them away from Christ, they desire to marry and so incur condemnation for having abandoned their former faith.”

While this passage is specifically about widows, it clearly points out a principle that applies to singles in general. Paul was giving guidelines to the church on how to care for widows. He told the church to care for those widows who had no family support. He warned against the church financially supporting younger widows, however, because unlike an older widow who already raised a family and no longer desired to form a new family, a younger widow was more likely to grow restless of singleness and thus become divided in her heart. She would want the support from the church for being a widow but she would also have a strong desire to be in a relationship again.

All that to say, Paul laid out the principle here that singleness should only be pursued by those who will not become weary of being single later on and thus grow bitter about it. We’ll talk more about this theme in point 4 of this article.

3. If Neglecting the Ministry of Marriage Will Lead You into Idleness, 1 Timothy 5:13-15 Says You Should Pursue Marriage

1 Timothy 5:13-15, “Besides that, [younger widows] learn to be idlers, going about from house to house, and not only idlers, but also gossips and busybodies, saying what they should not. So I would have younger widows marry, bear children, manage their households, and give the adversary no occasion for slander. For some have already strayed after Satan.”

Again, this passage is specifically about widows, but it lays out a principle relevant for all single people. Marriage is not the only ministry in life. But it is one important ministry that requires a lot of time and effort. It’s good to stay busy doing good things for God because idleness often leads us into sin (Romans 12:21).

Therefore, if your abundance of time and lack of responsibility in singleness is causing you to be idle and waste your life doing pointless things, 1 Timothy 5:13-15 says you should pursue marriage.

4. If Remaining Single Is Not a Joyful Sacrifice You Are Happy and Willing to Offer, 1 Corinthians 7:36 Say You Should Pursue Marriage

1 Corinthians 7:36, “If anyone thinks that he is not behaving properly toward his betrothed, if his passions are strong, and it has to be, let him do as he wishes: let them marry—it is no sin.”

Marriage is not a command for all Christians. Rather, it is a biblical command for those who want and need it. God certainly does call us to make sacrifices for him, sometimes choosing things we know he wants even though we don’t want them. But at the heart of all sacrifice that is pleasing to God is joyfulness.

If you are not joyful to make a sacrifice, it is not pleasing to God. As 2 Corinthians 9:7-8 states, “Each one must give as he has decided in his heart, not reluctantly or under compulsion, for God loves a cheerful giver. And God is able to make all grace abound to you, so that having all sufficiency in all things at all times, you may abound in every good work.”

In 1 Corinthians 9:5 Paul said, “Do we not have the right to take along a believing wife, as do the other apostles and the brothers of the Lord and Cephas?” Paul willingly sacrificed his right to have a wife so he could focus on other ministry efforts. Cephas (i.e. Peter) and other apostles chose to embrace the ministry of marriage.

In 1 Corinthians 7:7 Paul also said, “I wish that all were as I myself am. But each has his own gift from God, one of one kind and one of another.” Paul enjoyed his singleness and wanted others to have the same joy as him. But he also knew God made us all different. Some of us would not be joyful to be single. Thus Paul knew God gave others the gift of marriage.

In 1 Corinthians 7:39-40 he concludes, “A wife is bound to her husband as long as he lives. But if her husband dies, she is free to be married to whom she wishes, only in the Lord. Yet in my judgment she is happier if she remains as she is. And I think that I too have the Spirit of God.” Again, from Paul’s personal view point he felt singleness would lead to more happiness. But he obviously also recognized God gave other people other gifts. Notice, however, that Paul’s decision-making process about singleness or marriage involved deciding which one would make you “happier.”

Therefore, if you are not happy to be single, these passages are saying you should pursue marriage.

5. If You Have a Strong Sexual Desire that You Struggle to Control, 1 Corinthians 7:2-9 Says You Should Pursue Marriage

1 Corinthians 7:2, 8-9 “But because of the temptation to sexual immorality, each man should have his own wife and each woman her own husband . . . To the unmarried and the widows I say that it is good for them to remain single, as I am. But if they cannot exercise self-control, they should marry. For it is better to marry than to burn with passion.”

You should not pursue marriage just for sex. However, we must not deny the truth that God made sex as an expression of love between a husband and wife (Hebrews 13:4). If you have a strong desire to express love in this way, these verses are saying you should pursue marriage.