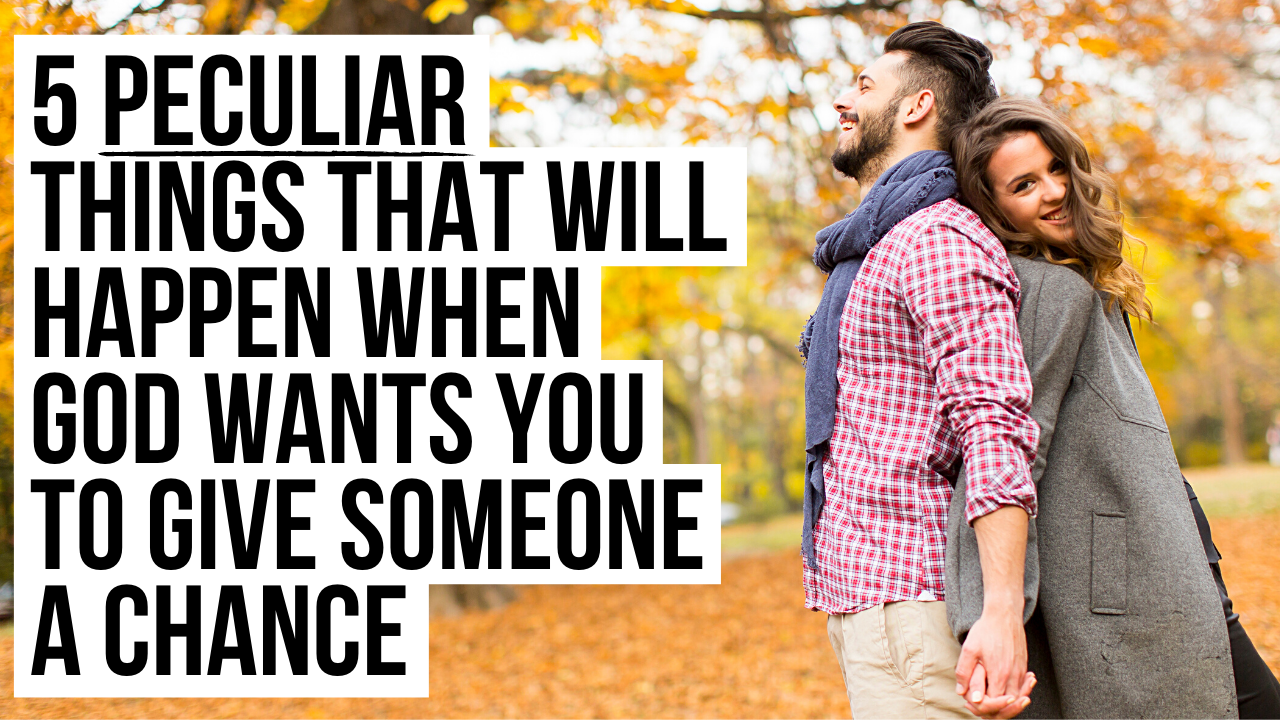 Either way, here are 5 peculiar things that often happen when the Lord is leading you to give someone a chance.

1. If You Originally Did Not Like Someone But God Has Given You An Opportunity to See Them in a New Light, This Is Often a Sign He’s Telling You to Give Them a Chance

Certainly this is not the norm. It’s more likely that if you have an initial inclination that you are not romantically interested in someone that you are correct and this will not change. So I’m not saying you should just go against your feelings and date anyone if they show interest in you. But God often does allow peculiar things to happen in our lives. Sometimes he will let you see someone in a new light which then changes how you feel about them.

I have a friend who really liked a woman but this woman did not instantly know she liked him back. However, they were in the same workout class together and when she accidentally tripped and twisted her ankle, he quickly approached her and helped her up. Something clicked for her in that moment and she realized she really did like him. They are now married with 3 children.

Don’t expect this type of thing to always happen, but it can happen. As Ecclesiastes 3:5 states, there’s “a time to embrace, and a time to refrain from embracing.” God could transition you from a season of not wanting to embrace someone into a different season where you do want to embrace them by letting you see this person in a new light.

2. If You Know Someone Likes You But You Are Uncertain If You Truly Like Them, God Could Be Leading You to Give Them a Chance

Everyone’s different when it comes to relationships. We don’t all act the same, and that’s okay. Some people are like microwaves and instantly know who they like. Other people are more like a wood burning stove. They need lots of time to warm up.

If you are the type of person who struggles to find clarity about your feelings for someone, it can be frustrating when someone else already knows they really like you but you are still trying to figure out how you truly feel about them. You may get mad at yourself because of your own indecisiveness. You will wish you just knew one way or the other. You will feel bad leaving them hanging, but you will also fear letting them go too soon or committing too soon because you are truly unsure one way or the other.

This is not an ideal way to start a relationship, but sometimes God allows peculiar things happen on our journeys. Sometimes he will tell you to give this person a chance because there is no other way you will ever know if you truly like this person or not. Many times confusion comes because of a lack of information. By giving someone a chance and spending more time with them, the Lord will provide you with more information to help guide your decision.

Of course this advice would not apply if you are wondering if you should marry someone. Marriage is meant to be final so you should only go forward into marriage when you are ready to fully commit. But before marriage, going on dates and even entering into an official dating relationship with someone should be used to assess if you like this person enough to continue with them.

Psalm 139:16 (NIV) states, “. . . all the days ordained for me were written in your book before one of them came to be.” God knows your future, and oftentimes he will help you know what your future holds by helping you take small steps forward. You don’t need to know what your entire future with someone will be before you take one step forward with them.

In a peculiar way, a lack of knowledge may be God’s sign to you that he does want you to give this person a chance because he’s saying you need more information.

3. If This Is the Type of Person You Usually Let Slip By But Then Regret It Later, God Could Be Telling You to Give Them a Chance

Mistakes happen in life, but a good sign of maturity is to learn from those mistakes so you can better react when something similar happens in the future. When it comes to relationships, or default position when we are uncertain is “no.” Many times, however, a quick “no” leads to a long season of regret.

If you have found yourself in this type of pattern, saying no to people only to look back later and wish you would have at least given them a chance, this may be a sign the Lord is telling you to do this very thing with the person you are currently wondering about.

It helps to take time to do some self-reflection with the Lord so he can teach us from our past experiences. As Psalm 139:23-24 states, “Search me, O God, and know my heart! Try me and know my thoughts! And see if there be any grievous way in me, and lead me in the way everlasting!”

4. If This Person Is Missing One Glaring Trait That You Really Wanted But Has a Lot of Other Qualities You Really Admire, This Could Be a Sign the Lord Is Telling You to Give Them a Chance

One peculiar thing God often does is plan for us to experience something that is exactly what we were trying to avoid. I remember telling myself, “I’ll never be a pastor.” Well, later on, God led me to be a pastor for a few years. Before I started this YouTube channel, I was only blogging and writing books. I remember when a friend told me I should start a channel, but I quickly shot it down and said, “No, I just like writing. Video seem like too much work.” Well, here we are, and now this YouTube channel is a big part of AGW Ministries.

The same can happen in relationships too. Don’t be surprised if God leads you to give someone a chance who is lacking something you really thought your future spouse would possess. As Proverbs 19:21 states, “Many are the plans in the mind of a man, but it is the purpose of the Lord that will stand.” In Hebrew, this verse says, “If you want to make God laugh, just tell him your plans.” Just kidding, that’s just my paraphrasing. But you get the point.

5. If This Person Is Winning You Over Because They Are Being Respectfully Persistent, This Could Be a Sign the Lord Is Telling You to Give Them a Chance

There is a fine line between being persistent and being pushy. Many people attempt to be persistent but they end up just being creepy. It’s a risky move to try to pursue someone who has already shot you down, but every now and then it does work out.

So if someone is slowly winning you over because they are somehow finding just the right balance in being respectfully persistent rather than pushy or creepy, this could be a sign the Lord is telling you to give them a chance.

Either way, seek the Lord’s guidance and he will help you. As Psalm 32:8 says, “I will instruct you and teach you in the way you should go; I will counsel you with my eye upon you.”