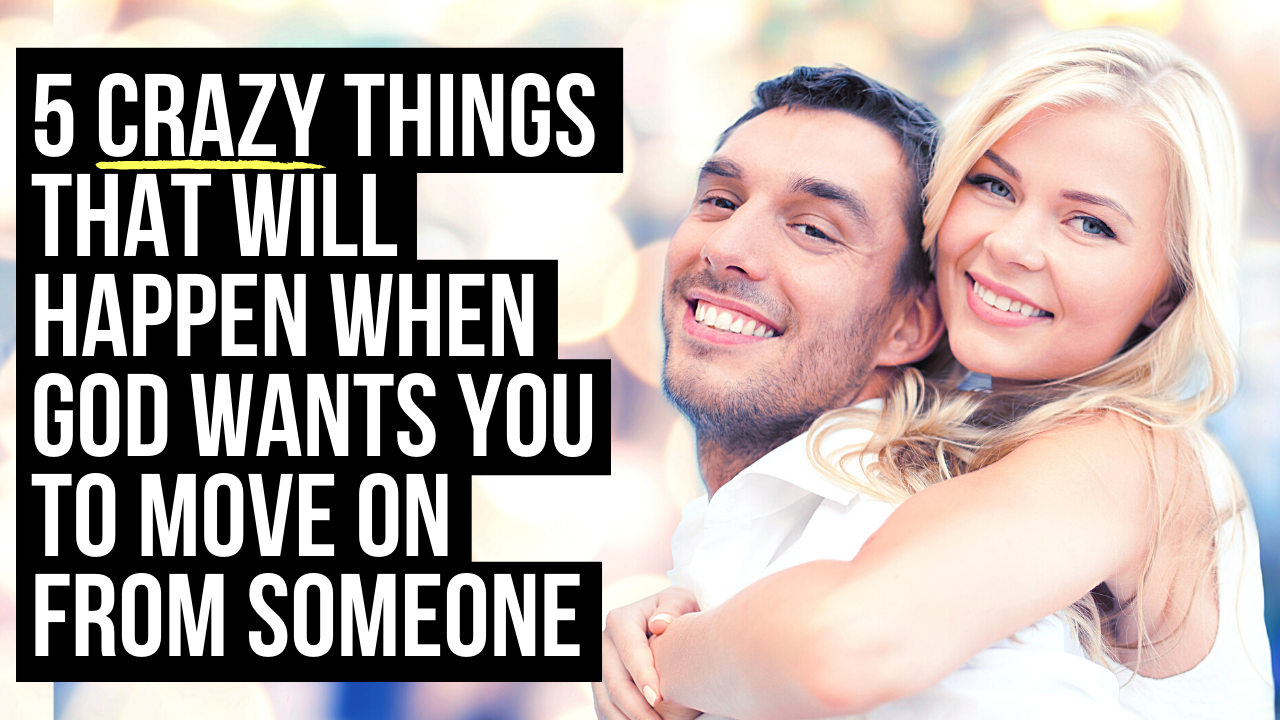 Here are 5 crazy things that God allows to happen sometimes as a way of letting you know he wants you to move on from a bad relationship.

1. If This Person Makes Wild Accusations Against You That Are Totally False, This Is Often a Sign God Wants You to Fully Move On From This Person

Everybody gets sensitive from time to time. Everyone has moments of insecurities. So it’s not a sign that God is for sure telling you to move on from someone if they sometimes need you to reassure them that everything is okay. But it is different when someone regularly makes lavish accusations against you that have no grounding in truth.

For example, if you leave the house for a few hours to run some errands and this triggers a big fight about how you were out with your ex that you haven’t talked to in years, this is a wild accusation that is completely fabricated in their own mind. Or if they start accusing you of looking down on them because you make more money or have a higher education than them but you did nothing to make them feel this way, this is a wild accusation that is coming out of their own insecurities. Or if you let them know you just want to stay home tonight because you are really tired from a long work week and they interpret this to mean you are breaking up with them so they then break up with you first, this is a sign they are prone to making really rash decisions not based in truth.

My point is, it’s normal for people to have doubts in dating. Conversations to create clarity are often needed to get the man and woman on the same page. But that is a lot different than when someone makes wild accusations that lack any logical likelihood of truly occurring.

If God is showing you someone with this unhealthy trait, this is often a sign he is telling you to move on from this person. As Ephesians 4:29-31 explains:

Let no corrupting talk come out of your mouths, but only such as is good for building up, as fits the occasion, that it may give grace to those who hear. And do not grieve the Holy Spirit of God, by whom you were sealed for the day of redemption. Let all bitterness and wrath and anger and clamor and slander be put away from you, along with all malice.”

2. If This Person Lets Little Issues Spark Explosive Arguments That Get Way Out of Hand, This Is Often a Sign the Lord Is Telling You to Move On

Every now and then, even little things can spark big arguments. Usually this occurs when the couple is tired and this little issue just puts them over the edge. Again, if that happens every now and then but then the man and woman talk it out and recover, that is normal and to be expected.

But some people possess so little self-control that this forest fire of an argument stemming from a little camp fire of a misunderstanding becomes common place in their interactions. Some people are so combative, so defensive, so willing to fight that it’s impossible to keep peace with them because even the smallest of misunderstandings trigger hurtful words and arguments. As Proverbs 15:1-2 explains:

A soft answer turns away wrath, but a harsh word stirs up anger. The tongue of the wise commends knowledge, but the mouths of fools pour out folly.”

When a misunderstanding occurs, mature people ask politely with soft words for the other person to help them understand. A fool, however, lets folly quickly pour out of their mouth, allowing their harsh words to create strife in the relationship.

If this crazy trend is occurring or has occurred in a past relationship, this is often a sign the Lord wants you to move on so you can avoid being in a bad relationship

3. If Someone Is Prone to Lots of Unreasonable Mood Swings Followed By No Explanation Afterwards, This Is Often a Sign the Lord Is Telling You to Move On

Again, we want to be careful here that we are not being hypercritical and accusing someone of being crazy just because they have an unreasonable mood swing from time to time. Humans are fragile creatures. The wrong amount of sleep, the wrong amount of food, or being exposed to the wrong type of social environment for too long can easily trigger a bad mood.

A mature Christian seeks to have self-control in instances like these. But even the most mature of Christians can have a bad mood now and then. When a mature person has a bad mood, however, and the people in their life notice it, they make sure to talk about it later to explain themselves and make right anything they may have done wrong.

But there are other people who are prone to lots of unreasonable mood swings, meaning mood swings that are not triggered by something that should cause a bad mood. If you haven’t eaten in two days, your mood will obviously worsen. But an unreasonable mood swing occurs for reasons that don’t really make sense. What makes it worse is when someone gets into a crazy bad mood but then won’t talk about it later and just wants to move on like nothing happened.

If this occurs in a relationship, often it’s a sign God wants you to move on because living at peace with a person like this is impossible. As Romans 12:18 explains, “If possible, so far as it depends on you, live peaceably with all.” It takes two to live at peace. Therefore, the only possible way to live peaceably with a bellicose person is to separate yourself from them.

4. If Someone Is Extremely Hypocritical and Holds You to a Standard They Do Not Hold Themselves to, This Is a Sign God Is Telling You to Move On

Hypocritical people can be so maddening to be around because hypocritical people are usually prideful people too. And prideful people are always looking at the flaws in others rather than at the flaws they have. So they can easily live hypocritical lives and truly not see their own hypocrisy because the pride in their hearts is blinding them to their own imperfections. Notice what Jesus said in Matthew 7:3-6. He said:

Do not give dogs what is holy, and do not throw your pearls before pigs, lest they trample them underfoot and turn to attack you.”

5. If Someone Is Consistently Abusing the “God Card,” This Is a Sign the Lord Is Telling You to Move On

God does speak to his people. But immature Christians or false Christians try to use this fact to control other people. “God told me you are acting wrongly against me, so you need to repent or God will curse you.” “I know you don’t want to date me, but God told me you will be my wife one day, so I think you need to pray again about our relationship.” “I know you said you want to get Mexican food tonight, but God told me he wanted us to get pizza, so pizza it is!”

Crazy people overuse the God card. They try to use “God told me” as a way of overruling your desires for their own desires. If someone is doing this to you, avoid them because they are spiritually dangerous to be around. We must seek to live like Philippians 2:1-4 explains:

So if there is any encouragement in Christ, any comfort from love, any participation in the Spirit, any affection and sympathy, complete my joy by being of the same mind, having the same love, being in full accord and of one mind. Do nothing from selfish ambition or conceit, but in humility count others more significant than yourselves.  Let each of you look not only to his own interests, but also to the interests of others.”