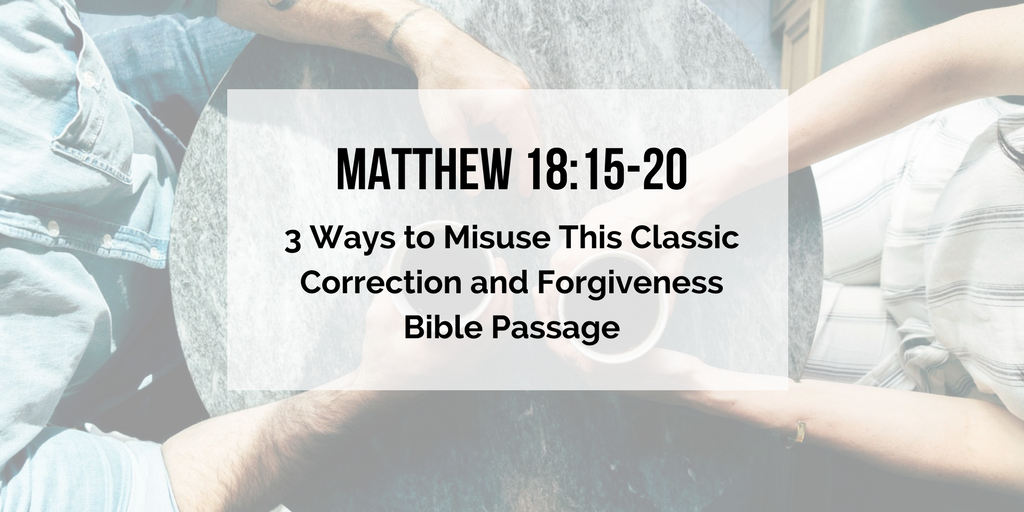 Whenever there is an offense between Christians or a Christian leader is being disciplined, Matthew 18:15-20 is usually mentioned a lot. This is good, but it can also be misleading when this passage of Scripture is misapplied.

In this article we will review what Matthew 18:15-20 actually says and then discuss three ways this Bible passage about forgiveness is often misused.

One of the most common mistakes we make as Christians is to think we know a passage so well we do not need to actually read it anymore. However, over the months and years our human minds can start filling in the blanks and thus we can think we know what the Bible says when really we don’t. Therefore let’s read Matthew 18:15-20 one more time before discussing how this passage is often misused and abused:

15 If your brother sins against you, go and tell him his fault, between you and him alone. If he listens to you, you have gained your brother.16 But if he does not listen, take one or two others along with you, that every charge may be established by the evidence of two or three witnesses. 17 If he refuses to listen to them, tell it to the church. And if he refuses to listen even to the church, let him be to you as a Gentile and a tax collector. 18 Truly, I say to you, whatever you bind on earth shall be bound in heaven, and whatever you loose on earth shall be loosed in heaven. 19 Again I say to you, if two of you agree on earth about anything they ask, it will be done for them by my Father in heaven. 20 For where two or three are gathered in my name, there am I among them.”

The most common abuse I see with Matthew 18:15-20 occurs by totally missing the context that this passage is addressing. This is not a Bible passage that should be applied to correcting every sin for every Christian. These instructions by Jesus on how to bring correction and forgiveness are directed specifically to Christian individuals, “If your brother sins against you, go and tell him his fault, between you and him alone” (Matthew 18:15).

This is so important because often times people feel Matthew 18:15-20 should always be used to correct any Christian living in sin even if their sin was not directly against you. But again, this three step plan of going to the individual, bringing two or three witnesses, and then bringing it to the church is a plan specifically given to someone who has been sinned directly against, “If your brother sins against you . . . .”

Therefore if you see a Christian living in sin but their sin is not against you, this method in Matthew 18:15-20 isn’t a command you must follow. You wouldn’t be doing anything wrong if you followed this plan. It’s obviously a very wise plan regardless of who the sin was against. But if you wanted to confront the person about their sin that wasn’t against you with the help of two or three other people right from the start, you would not be wrong.

This point of clarification is especially important when it comes to correcting Christian leaders in the church. Many times when a pastor’s sin is exposed, people ask right away, “Well did you follow Matthew 18 when you corrected him?” This is biblically naïve and misinformed. In many ways it would be inappropriate for someone to correct their authority figure if that sin was not directly against them. Most times if a Christian leader is living in sin but that sin is not against you, the appropriate step is not Matthew 18:15-20. The proper step is to tell the elders of the church directly to let them handle the situation since they are the authority over the pastor. 1 Timothy 5:19-20 states:

Do not admit a charge against an elder except on the evidence of two or three witnesses. 20 As for those who persist in sin, rebuke them in the presence of all, so that the rest may stand in fear.”

This verse does not say that an elder shouldn’t listen to an accusation against a pastor until the accuser talked to the pastor directly. The proper authority figures should gather the accusations from others and then handle the situation appropriately. Does Matthew 18:15-20 and 1 Timothy 5:19-20 contradict? No because they are addressing two different types of sin occurring in two different types of relationships. Matthew 18:15-20 is to individuals. 1 Timothy 5:19-20 is about correcting the sin in a Christian leader when that sin is not directly against you.

The above section is so important because bad pastors and false prophets often use people’s lack of knowledge about Matthew 18:15-20 to garnish pity and power to avoid the consequences of their sins. When their sin is exposed, they take the attention off of their failures and try to get everyone to focus on how Matthew 18:15-20 was not followed (even though it did not need to be followed anyways). The congregation feels sympathy for the pastor they love and hold onto the fact that Matthew 18:15-20 was not followed.

This is wrong for multiple reasons. Again, Matthew 18:15-20 does not need to be followed when exposing the sinof a Christian leader. If they were stealing resources from the church, misusing authority, or involved in an affair, there is no need to talk to that pastor one on one. You should go right to the elders because they have been entrusted with the authority to rebuke the pastor on behalf of the whole church.

Secondly, even in cases where Matthew 18:15-20 should have been followed, the fact that it was not followed does not lesson the sin of the offender at all. A sign someone does not really want to repent is when they point to Matthew 18:15-20 not being followed and then expect to be treated more leniently for their sins.

While Matthew 18:15-20 should obviously be followed when the proper context calls for this, even if it is not followed this does not change the reality of a real sin having been committed that needs to be repented of and forgiven. If Matthew 18:15-20 was not followed, that is a separate issue that should be dealt with separately. It should not be used to take the attention off of the offense that really did occur.

The third most common misuse and abuse of Matthew 18:15-20 is when people think that after this process of forgiveness is followed, the offender should be given full relationship rights again with the person who was offended.

Nowhere in Matthew 18:15-20 does Jesus deny the reality of relationships. While forgiveness is commanded, God does not expect Christians to forget that damage was done and act the same before the offense occurred. When possible this should happen. But it is impossible to think that a wound can be instantly healed all the time. Forgiveness can be given in a moment, but sometimes it just takes time for the relationship to heal. For example, if a husband and wife go through Matthew 18:15-20 after an affair occurred and forgiveness happens, the adulterer should not be punished for his or her sin. But that does not mean the one who was cheated on must act as though the affair never happened.

He or she has every right to ask extra questions if that person is going on a business trip similar to the trip where the affair took place. The person who was sinned against is not required to instantly no longer be sad or hurt. If the person who did the offending complains about the relationship still being different even though they asked for forgiveness, they are misunderstanding biblical forgiveness and Matthew 18:15-20.

Forgiveness is freeing someone of the punishment they deserve for their sins. Relationships, however, are built on trust and actions. A relationship will never be restored without forgiveness, but to have true restoration more things are often needed too.

For more on this topic of forgiveness and church discipline you may want to read What Does the Bible Say About Forgiveness and Reconciliation? or Lay Aside the Weight of Unforgiveness or Bible Verses on Church Discipline.