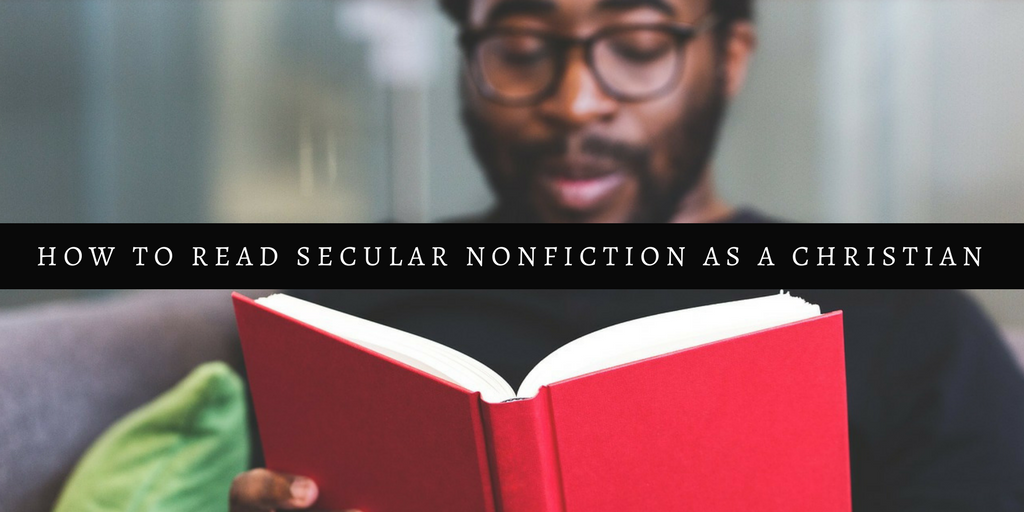 While the world certainly does not believe in the truths found in Scripture, this does not mean secular information always contradicts biblical wisdom.

The first principle Christians should use when reading secular nonfiction is that God’s word is the final authority. Therefore we should never read secular resources and allow that information to stand in judgment over the validity of the Bible. Rather Christians must use the Bible to authenticate if a secular resource is true or not.

When I was in seminary pursuing my master’s degree in pastoral counseling, our professor had each of us define what our beliefs were regarding our stance when using counseling models. We had to decide if we as pastoral counselors would be willing to use practices from the field of Psychology that contradicted the Bible, that were always confirmed in the Bible, or any practice that was not directly condemned in the Bible.

I settled on the belief that Christians are free to use principals developed in the secular field of Psychology as long as the Bible did not directly condemn any beliefs or practices embedded in that psychological principle. Some of my classmates felt the conviction to only use counseling methods that were directly from the Bible. None of us, that I am aware of, were comfortable using counseling methods that directly contradicted the Bible.

As you read secular nonfiction, you need to decide what you believe is the best practice for handling information and principles. I certainly don’t believe any Christian should believe or practice anything that contradicts the Bible. For example, in some counseling methods you would be required to believe that humans are basically good at heart and choices are merely the result of improper chemical balances in the brain. However, since the Bible states the human heart is corrupted from birth and people really do choose to do evil (Psalm 51:5, Romans 5:12), it would be unbiblical to practice a counseling method like this.

I take the stance that using secular ideas that do not contradict the Bible is good for Christians because I believe that God has given unsaved people his common grace. Special grace or saving grace is granted only to Christians when they understand the gospel and receive Jesus Christ as Lord through faith. Common grace, however, is experienced by all people, unsaved and saved. Anything good in this world is by God’s grace (James 1:17). Even when unbelievers deny God, a Bible believing Christian knows that the good in an unsaved person’s life is because of God’s common grace (Matthew 5:45).

Therefore it should be no surprise that God helps people through scientific and secular discoveries made by unbelievers. When an atheist studies the human brain and discovers a principle that will help humans manage their emotions better, this is God’s grace working through that nonbeliever. Non-Christians are still partakers of God’s common grace.

God has made the laws that man uses to create medication and perform life altering surgeries. When unsaved humans make a new discovery about the universe God has made, Christians should celebrate this too. While the world will praise the man or woman who discovered this “new” truth, Christians should use this discovery as fuel to glorify the God who created all good things by his eternal power.

For example, I recently read a book about introverts called Quiet: The Power of Introverts in a World That Can’t Stop Talking. Some of the claims in this book were directly contrary to Scripture (like evolution). I simply dismissed these concepts because I know the Bible contradicts these points. However, there were many other helpful pointers for introverts that were neither confirmed nor condemned in the Bible that I found helpful and insightful. “Personality types” is not a subject discussed in Scripture, but since this information can be extremely helpful to know about oneself and others, it is wise to learn about this topic.

We just have to be careful that any secular information does not contradict any biblical information. If it does, we reject the secular and believe the Scriptures. C.S. Lewis has some great points about this topic. In Mere Christianity he states:

If you are a Christian you do not have to believe that all the other religions are simply wrong all through. If you are an atheist you do have to believe that the main point in all the religions of the whole world is simply one huge mistake. If you are a Christian, you are free to think that all those religions, even the queerest ones, contain at least some hint of the truth. When I was an atheist I had to try to persuade myself that most of the human race have always been wrong about the question that mattered to them most; when I became a Christian I was able to take a more liberal view. But, of course, being a Christian does mean thinking that where Christianity differs from other religions, Christianity is right and they are wrong. As in arithmetic—there is only one right answer to a sum, and all other answers are wrong; but some of the wrong answers are much nearer being right than others.”

Here are few more quick pointers when it comes to Christians dealing with secular information. Read and study secular nonfiction to find fresh insight rather than constantly reading to debate and find errors. When I am in a particularly confrontational mood, reading secular information can be maddening. The margins in the book become filled with all the biblical reasons this information is wrong.

If you are studying for a debate or something I can understand doing this type of thing. But overall I generally find it a waste of time to simply read idea after idea that I know is false. I don’t think Christians need to know every false idea in the world. Rather, I find it much more helpful to search for truth.

I personally don’t read many books that I know will be mostly false information that contradicts my Christian beliefs. Every now and then I do just to keep current with what the world believes. But it’s not that helpful to learn math by studying all the people getting really wrong answers. You learn math by studying the work of people who have arrived at the correct sums.

In somewhat the same way, why read philosophers and atheists you know are totally wrong? Now and then it might be interesting and helpful. But overall I believe your time will be better spent learning about truth rather than learning about all the lies in the world. So read more with the motivation to find fresh insight rather than to find errors.

Lastly, reading secular nonfiction on topics that are not discussed in the Scriptures is probably the most helpful practice for Christians. If you want to learn about physics, space, or biology, it will be helpful to branch out into the secular world. Just make sure whatever you choose to believe does not contradict anything in the Bible. If it does, toss it out and keep moving forward.