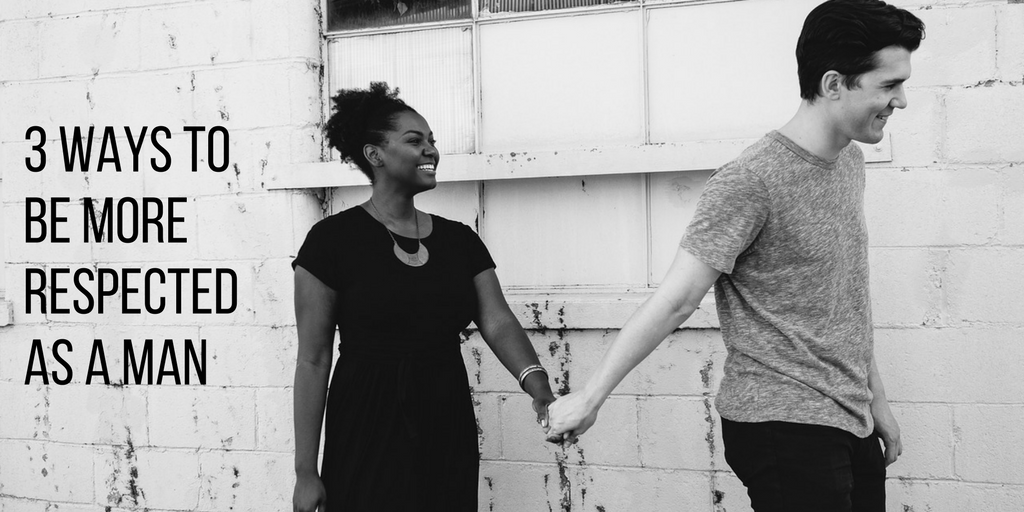 How can you be more respected by others as a man? Ultimately you cannot control the feelings and behavior of others. There is no way to actually “make” someone respect you more.

However, there are ways you can act that can influence how other people speak to you, treat you, and perceive you. There’s a reason that some men are respected by lots of people and other men are barely respected at all.

Of course all men should be “respected” in the sense that they are human and have value. What I am referring to is the type of “respect” that is based on admiration, appreciation, and which is synonymous with people generally listening to you, liking you, and seeing you as a leader.

Here are three quick tips that will cause more people to respect you as a man of God and see you as someone worthy of admiration. These tips are for men in all seasons of life, but they will be especially helpful to Christian single men who would like to attract a Christian woman.

Men in my generation (Millennials) generally struggle not only with following through on their commitments but with making commitments at all. Commitment is a resisted word these days. The type of manhood that is celebrated today is the adventurer, the traveler, and the do-gooder who flies in to save the day.

There’s nothing wrong traveling, adventure, and popping into someone’s life to help out without staying around forever. But a real man as outlined in Scripture is a man who is not afraid of responsibility and commitment. He dedicates his life to certain people which causes him to not be free to do anything he wants whenever he wants with whoever he wants. Real men commit to real people, not just to ideas and causes that change when those ideas and causes are no longer worthy of lots of social media likes and praise from others.

I think one reason men fear commitment nowadays is because committed people seem to vanish from the world’s eyes. You cannot go out with the guys and attend every party when you have a wife and family at home. You can’t go to the game and play on every sports team when you are committed to a local ministry. Commitment will take you away from the public eye but it will take you deeper into the hearts of those you are committed to.

One reason many men are not respected by women these days is because men often refuse to invest themselves into others in such a way that would illicit respect. People respect you when you are actually there for them. When you can’t commit and you just want to have fun and then move on, there’s no reason to respect you. What are you doing that deserves respect and admiration from others? People respect you when you serve them, love them, and lead them. You can’t lead anyone if you don’t commit to them.

Perhaps the reason the respect level is at an all-time low for men of my generation is because our commitment level is at an all-time low. Our faithfulness and perseverance as a generation is embarrassing. Obviously not every man is like this. I know plenty of godly men who are millennials. But when the jokes, jabs, and judgements are this pervasive about millennial men, there has to be something to it. While I think there are good things about millennial men that don’t get talked about enough, there’s no denying that the general public’s opinion about this group is really low and there must be a reason for it.

So if you are making lots of warnings towards people something is probably wrong with your relationships. However, at times in life we all need to set healthy boundaries so we don’t get walked all over. Boundary setting and “warnings” are often needed when you are leading, when you are in the workplace, or when you are responsible for others’ well being like in parenting.

Why do some men command respect when they give an order and other men’s words seems to get swept away into thin air like they were never spoken at all? People respect you when they know there is a consequence to not respecting you. I know this can sound a bit extreme to some, but I do believe consequences and discipline are absolutely biblical for leaders to practice. No man should be angry, shouting, or trying to make people do what they want by throwing a temper tantrum.

My point is that people won’t do what you say if you do not do what you say. If you tell your son you will take a toy away if they keep speaking disrespectfully but you don’t follow through on your warning, your child is not going to respect you. Why would your son do what you say when you don’t even do what you say? If you are the boss and you tell an employee you will dock their pay if they are late one more time, but then they are late and you just call them into the office and ream them out rather than dock their pay like you said you would, you are creating a culture where people will not respect you.

Give a warning, clearly set the boundary, and then do it. If people know you will do what you say they will respect you. It’s not about fear or intimidation. It’s about being a man of your word even when it means enforcing something that other people may not like.

Surround Yourself With Respectful People

As I said in the beginning, ultimately you cannot control how other people treat you. The way you act will cause people to respond a certain way, but if someone has low character and is generally just a disrespectful person, it doesn’t matter how great you act, they will continue to be disrespectful to you.

These were just three tips to help you be more respected as a man. Ultimately, the more Christlike you become, the more disrespected and respected you will be. And if you want to be respected by a godly wife one day, you must be a godly man first.