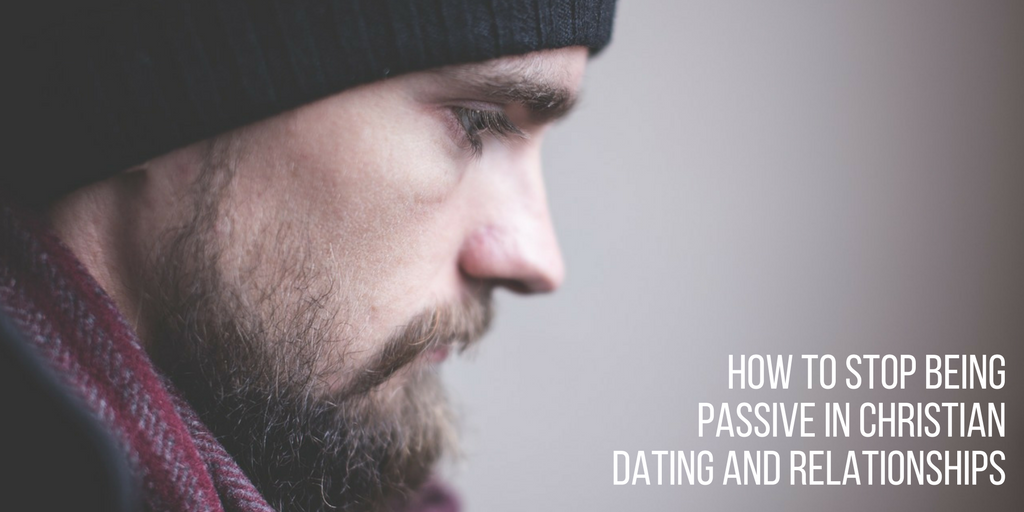 Do you feel stuck and paralyzed as you consider the possibility of pursuing a Christian woman or entering into a Christian relationship with a godly man? Are you tired of being so passive and fearful in Christian dating and relationships?

A general truth seen throughout the Bible is that our inner beliefs dictate the way we feel and act in life. God has designed us to work from the inside out. Our inner man controls our outer lives. Therefore if you are anxious and paralyzed in your singleness this is really a theological issue.

For example, when David was a young man, he was shocked at Israel’s passivity towards Goliath. David wondered to himself, “Why are all the men just standing around? What is everyone so afraid of?” I think we can ask ourselves those same questions when we look out over the sea of single Christian men and women who are stuck doing nothing in fear of the unknowns that lie ahead in Christian dating and relationships.

If You Want to Stop Being Passive in Christian Dating and Relationships, You Must Know Who Your God Is

I believe David acted when he heard the threats of Goliath while all the other men were frozen in place was because of David’s beliefs about God. Notice what Goliath was shouting to the Israelites day after day, “He stood and shouted to the ranks of Israel, ‘Why have you come out to draw up for battle? Am I not a Philistine, and are you not servants of Saul?’ . . . For forty days the Philistine came forward and took his stand, morning and evening” (1 Samuel 17:8, 16). When David saw what was happening he was so confused about how these men could allow this enemy to talk so blasphemous to God’s army. Notice how David responds:

Then David said to the Philistine, ‘You come to me with a sword and with a spear and with a javelin, but I come to you in the name of the Lord of hosts, the God of the armies of Israel, whom you have defied. 46 This day the Lord will deliver you into my hand, and I will strike you down and cut off your head.’” (1 Samuel 17:45-46)

The other men had swallowed Goliath’s lie as he spewed them day after day, “You are servants of Saul!” Goliath disregarded Israel’s God and said that Saul was their main leader. David disregarded this lie and proclaimed the truth, that he was a member of “God’s army.” No other man corrected this theological mistake but David.

David not only knew his identity was in the Lord, he also trusted deeply in the sovereign plan of God. Many times people feel frozen and like their choices don’t matter when they hear about the sovereignty of God. The Bible says, however, that we should have the opposite reaction when we hear about God’s sovereignty. Our faith in his plan should empower us to move forward in faith.

Only when we trust God’s sovereign power will we be free to act in faith. Notice too that in 1 Samuel 17:46-47 David trusted the sovereignty of God which allowed him to act:

This day the Lord will deliver you into my hand, and I will strike you down and cut off your head. And I will give the dead bodies of the host of the Philistines this day to the birds of the air and to the wild beasts of the earth, that all the earth may know that there is a God in Israel, 47 and that all this assembly may know that the Lord saves not with sword and spear. For the battle is the Lord’s, and he will give you into our hand.”

David knew God was in control of the future so this empowered him to act in faith during the present. David is confident that God had a plan for how this battle would end which empowered David to begin this battle without fear.

I love that David proclaimed that he would cut off Goliath’s head but he didn’t even have a sword with him. This is was not an accident, “and that all this assembly may know that the Lord saves not with sword and spear. For the battle is the Lord’s, and he will give you into our hand” (1 Samuel 17:47). David was thinking about the glory of God, not the strength of Goliath. This is what gave David strength even when he faced an enormous obstacle.

When It Comes to Christian Dating and Relationships, You Must Stop Waiting for Perfection Before You Start Moving Forward

David knew the victory was not in the sword he held but in the sovereignty of the God who held him. The Bible gives special emphasis to David’s lack of a sword, “So David prevailed over the Philistine with a sling and with a stone, and struck the Philistine and killed him. There was no sword in the hand of David” (1 Samuel 17:50). The point is that victory comes by God. Imagine the scene: thousands of other older soldiers were standing on the sidelines in full battle attire, with swords on their hips but still passively dangling in still their sheaths. David walked out even though he was less equipped because he knew if God willed him to beat Goliath, he would beat Goliath.

This does not mean we start doing things without preparing. David had been trained through fighting bears and lions before facing Goliath (1 Samuel 17:34-36). The point here is not that we should just recklessly charge ahead in life and relationships and say, “Well, I know this seems foolish but God will provide.” The point, rather, is that we will all need move forward with God even when things are not perfect.

There are many roadblocks ahead if you desire to glorify God in your singleness, dating, and future marriage. But when you trust God you can begin moving forward even when you know things are not perfect. David didn’t even have a sword, but that didn’t stop him from trusting the sovereignty of God and heading onto the battle field. Throughout 1 Samuel 17:45-47 David’s focus was not on what is but on what will be because of God’s sovereignty. David knew God was in control and would deliver and accomplish the will God had for him. Therefore he acted in faith in 1 Samuel 17:48-54. His trust in Gods sovereignty predated his heroic actions.

Likewise, if you hope to move forward in life, in relationships, and towards your future marriage, your trust in God must come before God moves on your behalf, not after. If you always wait to see God come through for you before you move forward, you will never move. God meets us in the moment. He asks us to step out in faith because he expects us to believe that he actually controls our future.