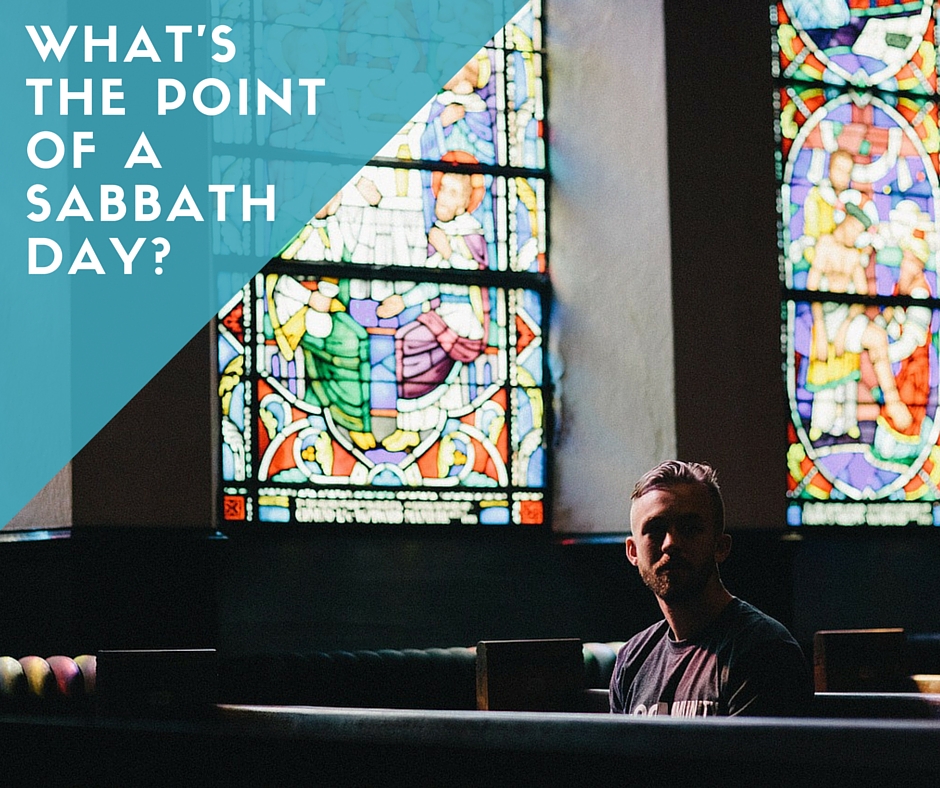 In Jesus’ time on earth, one of his main battles with the Pharisees revolved around the Sabbath, which was supposed to be a time of resting from working. The Jews were governed by the laws of the Torah, and there it explicitly states not to work on the Sabbath.

Jesus could have just gone along with what they wanted as a way of keeping the peace, but he didn’t. Jesus clearly had an equally strong conviction about how the Sabbath rest should be viewed. He wanted to show people that the Sabbath is important not so much because we are to rest from our work, but more so because we must rest in God. So what’s the importance of resting in God?

The Pharisees turned God’s law into a list of “do’s and do-nots” by which one could attain a right standing with God. From the beginning, however, God had a much different purpose for his commands. Jesus said, “Do not think that I have come to abolish the Law or the Prophets; I have not come to abolish them but to fulfill them. . . . For I tell you that unless your righteousness surpasses that of the Pharisees and the teachers of the law, you will certainly not enter the kingdom of heaven” (Matthew 5:17, 20).

Everything in the Old Testament finds its fulfillment in Jesus Christ. Just as Abraham was counted righteous because he believed God (Romans 4:3), everyone else before the time of Christ was to obey the law of God not to earn their salvation, but to express their belief in God through their obedience. Those who sought to follow God’s commands before Christ came to earth were actually expressing their faith in Christ, who was the one these commands were pointing to (Romans 3:19-31, John 5:39). Their faith was expressed through their obedience, and thus they were not saved through works but through their faith and by God’s grace.

Therefore, when it comes to the Sabbath, the Pharisees were completely missing the point as they did with all of God’s commandments. They thought by obeying the commandments, such as resting on the seventh day, they were earning their own righteousness with God. Jesus sought to correct this faulty thinking, showing us that we are to obey his commandments as a way of expressing faith in God to provide our every need. Resting on the Sabbath was supposed to be an expression of faith that showed they believed God was the one providing and their own works were never enough.

Resting In God Is Important Because It Helps Us Obey

Perhaps this is one of the reasons why the New Testament Church started practicing the Lord’s Day (Sunday) which is on the first day of the week rather than the Sabbath (Saturday) which was on the seventh day of the week. The old way instructed people to work all week and then rest. They were to imitate God who earned his rest during the creation account by working six days and then resting on the seventh.

Jesus was raised from the dead on the first day of the week (Sunday). Therefore as redeemed people who live from the power of the resurrection, it makes symbolic sense to practice the spirit of the Sabbath on Sunday. Christians should still have a Sabbath rest day every week not because it accomplishes something for us, but because it gives us a specific time to remember what Christ has already accomplished for us.

Before Christ came, everyone thought that we had to earn our rest through works. Now God has shown us we must produce good works out of the rest he has freely given us in Christ Jesus. If we forget how important it is to rest in God, it will show up in negative ways as we live our life.

The old way was to work and then rest, but the new way is to rest and then work. We no longer work for our rest. Now we work from our rest. With Jesus came a cosmic shift in our relationship to God. This is why resting in God is so important.