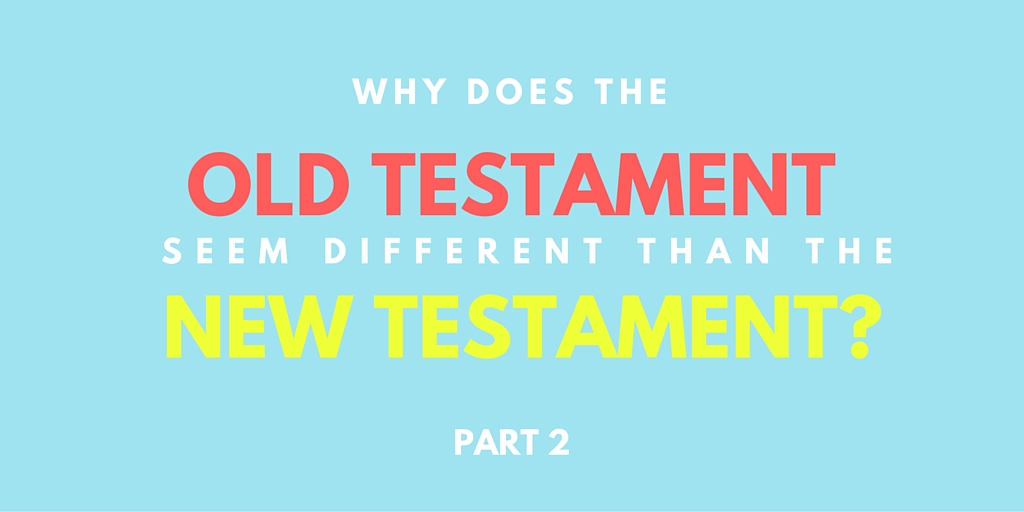 As we discussed in Part 1 of this blog series titled, “Why Are the Old Testament Laws So Harsh?”, rather than deny that there are any differences between the Old and New Testament, here we want to explain why there are differences. It’s right to point out the love, holiness, wrath, and grace of God in all sections of the Bible to show its cohesiveness, but to deny there are some obvious surface level differences between the Old and New Testament is simply irresponsible.

One main reason God acted differently in the Old Testament was because he was manifestly present in a different way than he was in much of the New Testament and now. Harsh laws took place in the context of God being physically present.

Old Testament Laws Were So Harsh Because God Was Manifestly Present

The “presence of God” is a term that is often thrown around amongst Christians, but within the Bible there are different ways God’s presence is referred to. In its simplest biblical forms, God’s presences can be talked about in at least three basic ways:

It may seem harsh for God to tell the Levite priests to kill people who are directly disobeying God’s commands, but we have to remember the context of such harsh commands in the Old Testament. God was not just omnipresent, personally present, but rather manifestly present. For example, Leviticus 21:9, “And the daughter of any priest, if she profanes herself by whoring, profanes her father; she shall be burned with fire”, seems like an incredible harsh law. But we must remember the context made clear in Leviticus 21:1, “And the Lord said to Moses . . .” God was present, speaking in a physical way, and since the people were in his presence, God was telling them how holy the must be to avoid being completely wiped out by his holiness (Exodus 33:3-6).

Skeptics laugh and raise their eyebrows when they read the harsh Old Testament enforcement of God’s laws. And then they make arguments such as, “Well why aren’t Christians killing homosexuals now, executing adulterers now, or taking the life of people who dishonor their father and mother now?” One reason (and there are many) laws like these no longer apply is because God’s manifest presence is no longer amongst us like it once was.

You are certifiably crazy if you try to kill someone for sinning because you think God told you to do that. The harsh laws in the Old Testament, however, were not told to people in a personal way by God. Moses was given the law by God when God was manifestly present amongst the people. In fact, when Jesus manifestly returns in such a way where the world cannot deny his existence, the Bible makes clear that the same type of bloodshed found in the Old Testament will take place again (Revelation 19:13-16, 21).

At this time in human history, God is giving us time to receive our pardon through Christ. But make no mistake, if we reject the pardon, the harsh punishment for sin will be executed.

The More God’s Presence Manifests, the Harsher the Penalty for Sin Becomes

In Acts 5:1-11 Ananias and Sapphira lie about the price of a field they sold, and then they both are struck dead by the Holy Spirit. This is very odd Bible passage at first glance. It seems like it should be found in the Old Testament rather than in the New Testament.

Whenever I talk to atheists, invariable the statement is eventually made, “Well if God is actually real, why doesn’t he reveal himself in a way where it is undeniable?” Atheists claim they won’t believe God unless there is unmistakable evidence, like his manifest presence.

When faith (based on evidence) is no longer needed, the chance to escape the penalty for sin will be over. God had harsh laws for sin in the Old Testament because his holy presence was manifest. God will fully apply the penalty of sin (death) on unbelievers when he reveals himself fully again in the second coming of Jesus Christ.

The reason God is not manifestly present right now is because he desires to give people the opportunity to repent. He loves us too much to not give everyone (every nation) a chance to see the truth and repent. But when the gospel is preached throughout the entire world and God sees it fit to return, harsh, instant execution will return as well:

The Lord is not slow to fulfill his promise as some count slowness, but is patient toward you, not wishing that any should perish, but that all should reach repentance. 10 But the day of the Lord will come like a thief, and then the heavens will pass away with a roar, and the heavenly bodies will be burned up and dissolved, and the earth and the works that are done on it will be exposed.

Since all these things are thus to be dissolved, what sort of people ought you to be in lives of holiness and godliness, 12 waiting for and hastening the coming of the day of God, because of which the heavens will be set on fire and dissolved, and the heavenly bodies will melt as they burn! 13 But according to his promise we are waiting for new heavens and a new earth in which righteousness dwells. (2 Peter 3:9-13)

The harsh laws in the Old Testament seem at odds with the love of God expressed in the New Testament. But with a closer look, we can see that the New Testament does not hide the fact that when the manifest presence of Jesus Christ returns through his second coming, the chance to receive God’s grace will vanish.