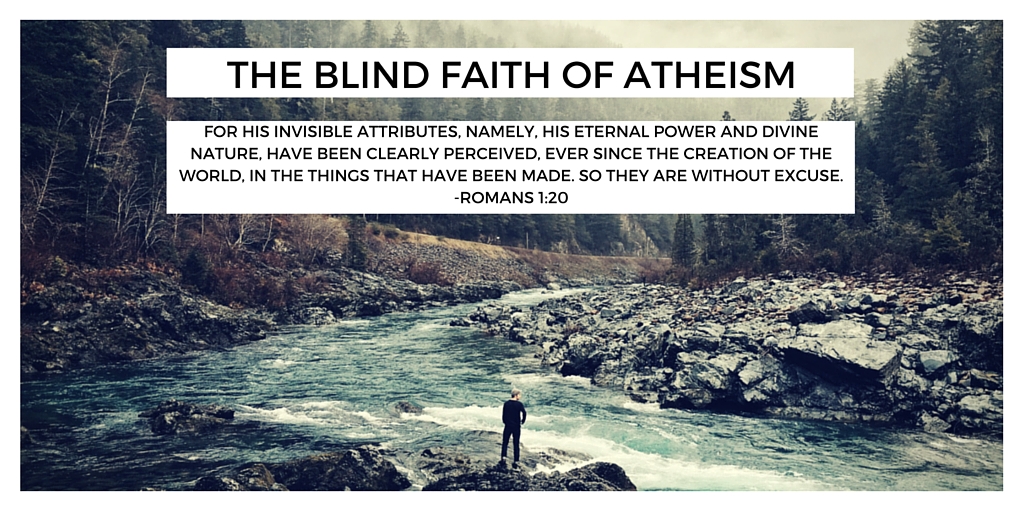 Now faith is confidence in what we hope for and assurance about what we do not see. 2 This is what the ancients were commended for.3 By faith we understand that the universe was formed at God’s command, so that what is seen was not made out of what was visible. – Hebrews 11:1-3 (NIV)

Atheists, in general, claim that they would believe in God if there was evidence that supported his existence. They claim there is no evidence, and therefore they believe God does not exist. They say that to be an atheist, you don’t need to prove that God doesn’t exist because the burden of proof rests on the theist (the person who, at minimum, claims a god does exist). The name “a-theist” literally means “without-theism.”

Webster’s Dictionary defines “atheist” as, “a person who believes that God does not exist.” It defines “agnostic” as: “a person who holds the view that any ultimate reality (as God) is unknown and probably unknowable; one who is not committed to believing in either the existence or the nonexistence of God or a god.”

But again, the atheist is making this definite claim based on the absence of any evidence for God. So atheism is a belief rooted in a lack of evidence about a theistic God.

Atheism Is Based On Blind Faith

Ironically, most atheists are disgusted with Christianity because atheists claim Christianity requires “blind faith” or “blind trust.” But by the very definition of the name they carry, atheists in fact are the ones who have based their beliefs on the absence of evidence.

Biblical Faith Is Believing Based on Evidence and Logic, Not Undeniable Proof

While an atheist is putting their faith in the absence of God, they are certainly only expressing a blind faith and not a true, biblical faith. By “blind faith” I mean it as the atheist uses it. When atheists say Christians have blind faith, they mean we have beliefs based on no evidence. This is not accurate and goes against what Christians are commended for in Scripture.

Acts 17:11 explains, “Now the Berean Jews were of more noble character than those in Thessalonica, for they received the message with great eagerness and examined the Scriptures every day to see if what Paul said was true.” Nowhere in Scripture are we told to form a belief based on the absence of evidence. Biblical faith is not opposed to evidence and must be based on beliefs that correspond with evidence (including logic). You don’t need an absence of evidence to have faith. You need an absence of proof. If you can see it fully you don’t need faith. 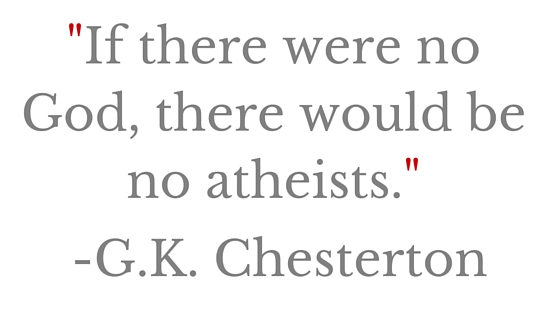 Biblical faith is not blind faith. Biblical faith is believing a claim after analyzing the evidence and logical arguments even though you can’t prove the claim with one hundred percent certainty, and yet you also certainly cannot deny the claim even one percent.

Scientists use this same language and method to come to conclusions they call “theory.” A scientific theory is not a guess, but a rational conclusion based on research and evidence. But a theory is not a “law” which is something that can be proved beyond a shadow of a doubt. The definitions are explained here:

A theory can be a strong one if it has a lot of evidence to back it. It may also be regarded as a weak theory if the amount of accuracy in its prediction is low. A theory may become obsolete with time and be replaced by a better one. A law, however, is a universally observable fact. It is undeniable and never fades away with the stretch of time. . . . A law is an observation; a theory is the explanation of that observation.”

Everything in the universe is the only evidence we can study. Everyone has the same evidence, the same methods of study are available to us all, and yet we differ vastly on our conclusions of the evidence. But make no mistake, everyone is using a form of faith when they believe something that is not a “law,” no matter how likely it seems, since they trust their conclusions to be true even though they can’t prove it with perfect certainty.

Christian Beliefs Are Based on Evidence, Not Blind Faith

For example, Hebrews 11:3 states, “By faith we understand that the universe was formed at God’s command, so that what is seen was not made out of what was visible.” Notice Christians should never have blind faith because we are told to “understand” what we believe through faith. In this example, the claim that we believe by faith is that God formed the universe. We must have faith to believe this claim because we can’t prove it definitely with observable evidence, even though it’s obvious to us and should be to the world (Romans 1:20). But proving something is presenting facts that leave no other explanation. However, just because you can’t prove something does not mean there is no evidence.

Logic tells us that physical matter which we can all touch, see, and analyze had a beginning. Many scientist are committed to explaining “first matter” which means they try to figure out how the very first thing was created in the very beginning because obviously we know that physical matter never just appears. There’s always a cause. In other words, something always comes from something in this universe. Something never comes from nothing in the natural world.

Logically, therefore, if we have a principle that everything has a beginning in the universe that we exist in, it would make sense if an eternal being who is outside of time, space, and our universe was the first cause and Creator of what we see. The Bible claims God does make something out of nothing (Romans 1:17). The Bible claims God has existed forever (Psalm 90:2). If we live in a universe that requires a first cause, and the God of the Bible claims to be the type of being who logically could be that first cause, that is good evidence that this type of being does exist (or at least could exist). In fact, personally, I have never heard an explanation for the beginning of everything that is more logical than Hebrews 11:3; therefore, to me, to believe that God does not exist would require more blind faith than the biblical faith needed to believe that he does exist.

To be fair, scientists have ideas about how “energy” can produce matter or how space expands to create stuff (nonsensical arguments in my opinion), and yet even then they must explain how the “energy” and “space” in our universe first came into being. This is why some atheist who are respected in their field have actually suggested aliens were the cause of our earth’s beginning because they know logically a big bang does not explain “first matter” and they know there needs to be some first cause to everything. (Start at 3:10 of the video below for an example  of a well respected atheist making a claim like this.)

Christians don’t have to come up with wild hypothesis based on no evidence (blind faith) because logically it makes sense that only a being who is eternal could be the cause of a universe that clearly is not eternal. Atheists complain when the Christian says God was never created. But if God created time, logically it would make sense if the rules of time did not apply to him. And having a God that was never created fits logically in this universe that needs a first cause:

Before the mountains were brought forth, or ever you had formed the earth and the world, from everlasting to everlasting you are God.” (Psalm 90:2)

We need faith to believe these claims since we can’t prove them with one hundred percent certainty, but these claims fit so perfectly in this universe we also cannot deny them. Christians believe because we know the facts in our universe and these facts fit too perfectly with the Bible’s claims about God.

This type of deductive reasoning happens in the courtroom all the time. The gun is there, the blood is there, the culprit is there, but no one saw it happen. You can’t prove with the scientific method that the culprit did it, but you can use deductive reasoning to analyze the evidence and form a conclusion so undeniable you are forced to make a decision of consequence. This is what biblical faith looks like, which is very different that blind faith. 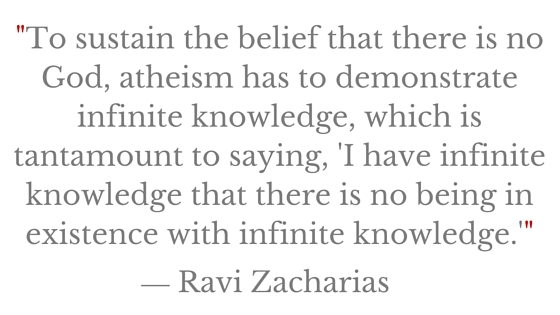 The Atheists’ Commitment to Science Forces Them to Have Blind Faith

Since atheists are committed to only believing what can be proven through science, this actually forces them to have blind faith in regards to God and the beginning of everything since questions like these are not answerable through science. Mike Jones from Cornell University states:

Science deals with testable hypotheses, i.e. ideas that are falsifiable through prediction and experiment. As it is only possible to interact with the contents of the Universe, it is essentially impossible to ask a scientific question about what is external to the Universe, whether spatially or temporally (assuming either is even possible). . . . In short, questions about events that were before or outside the Universe are not currently scientific questions, and likely never will be.”

Bertrand Russell, a champion for atheists, states, “Where there is evidence no one speaks of ‘faith.’ We only speak of faith when we wish to substitute emotion for evidence.” His claim was made to ridicule religion, and yet, ironically, he encapsulated perfectly why atheists in fact are the ones with blind faith. Since atheism is a belief based on the absence of evidence, it also makes sense, as Russell explained, why atheists are so emotional in regards to their unbelief and in their dislike of those who do believe in God.

I’ve never met an atheist who liked the God of the Bible and yet didn’t believe because of evidence disproving God. I’ve only talked with atheists who dislike God and choose not to believe in him because they claim there is a lack of evidence.

Their emotion is present, the evidence is absent, and thus by Russell’s logic the atheist’s faith must be strong.