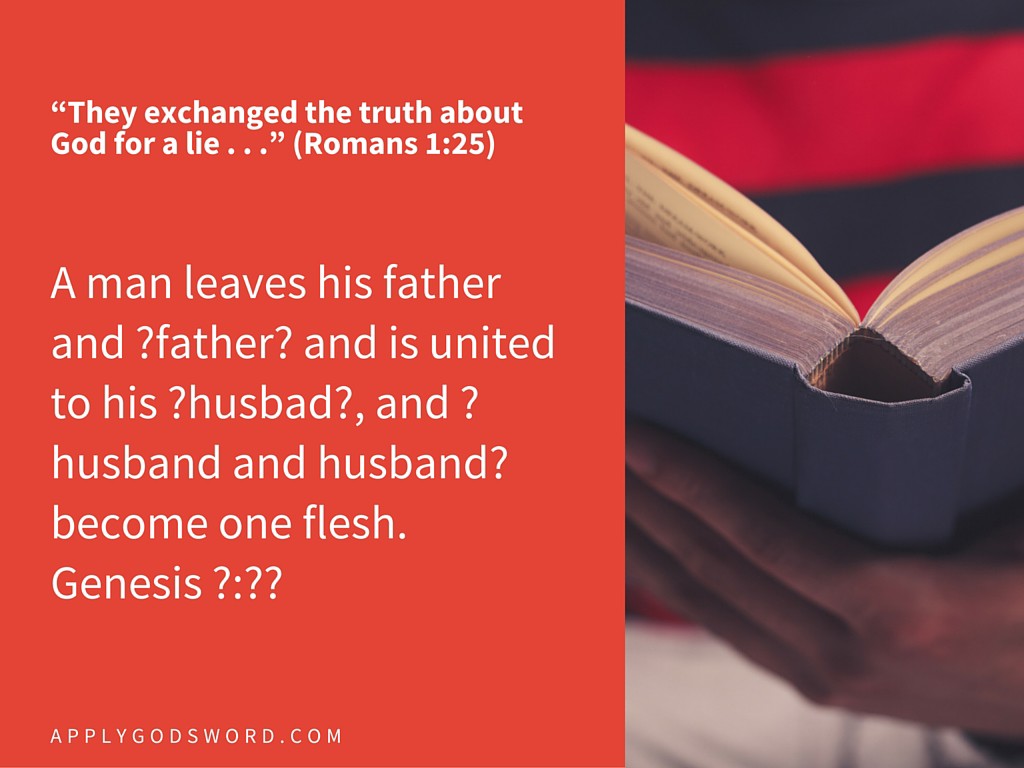 We know that the Bible clearly condemns homosexuality (Romans 1:26-28, 1 Corinthians 6:9-11), but why? Why is homosexuality, and therefore gay marriage, wrong in the Bible?

Foundationally, it is important to note that all of God’s commands in the Bible are a reflection of his character. God commands what he has commanded for the same reason he has created everything in its original state before the fall – to glorify himself. To glorify means to exalt, to make known, to cast a light on, to make visible, or to reveal. Just as God made people in his image (Genesis 1:27), he thus made them for his glory (Isaiah 43:7), as bearing the image of God and glorifying God are the same.

God made his commands to glorify himself since they are an expression of himself. When we disobey the commands (conceal) rather than obey the commands (reveal), the Bible calls this sin since concealing the truth is the same thing concealing God’s glory, “For the wrath of God is revealed from heaven against all ungodliness and unrighteousness of men, who by their unrighteousness suppress the truth” (Romans 1:18).

Since God created his commands to express his true character, he did not randomly roll the dice thus making homosexuality sin, where if the dice rolled differently traditional marriage would have been sin. God chose to make traditional marriage because it directly reflects his character, which is why it is good. Likewise, in the Bible, God says homosexuality and gay marriage are wrong because they contradict God’s character. How?

Why is Gay Marriage Wrong in the Bible: Marriage is Meant for Both Males and Females to Reflect God

To understand why gay marriage is wrong in the Bible, we must understand what the Bible teaches regarding males and females being made in God’s image, “So God created man in his own image, in the image of God he created him; male and female he created them” (Genesis 1:27).

Gay marriage is wrong in the Bible because you need both a man and a woman to show the full picture of God, to reveal him rightly, thus to glorify him. He made them differently, equal in significance, but different. He also made them to complement one another. Since both are different and both complement each other, if one is missing the picture is impossible to be whole. Two males do not show the image of God, and two females do not either. When things do not reveal God accurately, God declares them sinful.

This is obvious as everyone must admit how perfectly men and women naturally “fit” together physically. Life occurs when males and females have sex. No life can occur in homosexuality because it’s unnatural, meaning not the way God originally designed people to unite and bear God’s full image, thus bringing him glory (Romans 1:26-27).

Ephesians 5:21-33, in summary, states that husbands are to fulfill their role in revealing the truth through loving and leading their wives, while wives are to respect and respond (“submit”) to their husbands. Most importantly, this passage of the Bible explains what marriage is supposed to truly reveal: the relationship between Christ and his Church.

Why is Gay Marriage Wrong in the Bible: Gay Marriage Does Not Reveal the Relationship Between Christ and His Church

The Bible explains that marriage glorifies Christ because it reveals Christ. Christ is represented through the husband’s laying down his life for his bride (Ephesians 5:26), and the church is represented through the wife’s loving submission to her husband’s sacrifice. If we subtract the male’s role or the female’s, the whole symbol for Christ and his Church breaks down.

Gay marriage is wrong in the Bible because not only does same sex marriage require half of the picture to be missing in God’s original design physically, it also forces the males or females involved to forsake their original roles as well. A same sex husband is not laying down their life for a wife. And a same sex wife is not living in the respectful and responsive role she was designed to live in towards a husband. Those who support and practice gay marriage are no longer glorifying God (revealing the true character of God) because they have forsaken his original design for marriage between a man and a woman.

After admitting how males and females are both needed to fully show a picture of what God is like, we can then see that when homosexuality occurs, this conceals rather than reveals God’s reflection, as both a man and woman are needed to reveal the truth about God. Therefore, gay marriage and all homosexual practices are wrong in the Bible because they do not glorify God.

May we hold tightly to the truth so clearly stated in the word of God that we might not fall into the same old trap, “They exchanged the truth about God for a lie . . .” (Romans 1:25).

(Note: Homosexuality is not a new sin, therefore the defense of homosexuality is not new. Everywhere that there is sin, there will be those who seek to justify their logic for supporting what God has declared as sinful. Therefore, this is not meant to convince someone who does not believe the Bible. Rather, this is meant to explain to a Bible believing Christian why God has declared homosexuality, and thus gay marriage, to be wrong.)