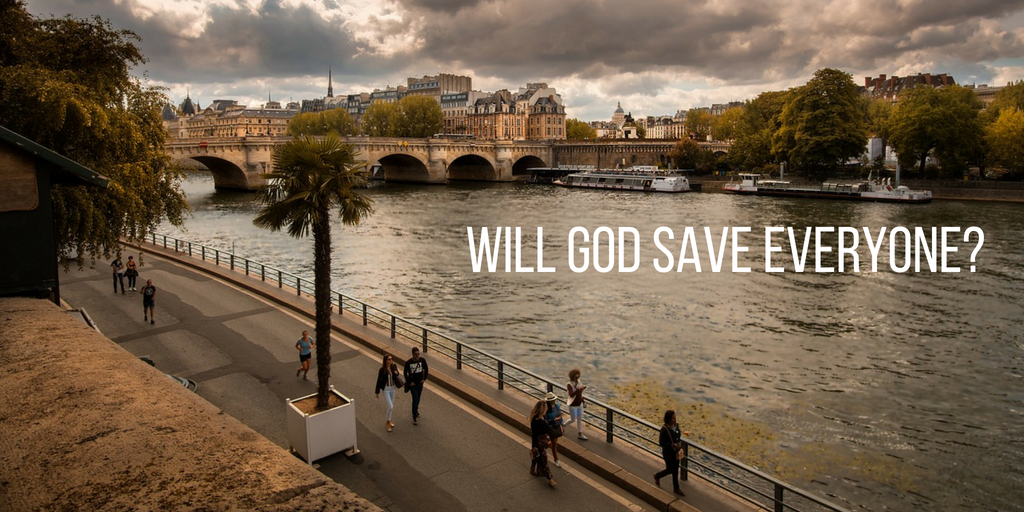 When Paul gets to Romans 11:1-10, he is answering the question, “Will the Jews be saved?” While Paul is referring specifically to Israel, this Bible passage can also help us answer the more general question, “Will God save everyone?”

By studying Romans 11:1-10 we can see how God relates to all people.

Christianity Is About Bringing People In, Not About Keeping People Out

“I ask, then, has God rejected his people? By no means! For I myself am an Israelite, a descendant of Abraham, a member of the tribe of Benjamin. 2 God has not rejected his people whom he foreknew. Do you not know what the Scripture says of Elijah, how he appeals to God against Israel? 3 “Lord, they have killed your prophets, they have demolished your altars, and I alone am left, and they seek my life.” 4 But what is God’s reply to him? “I have kept for myself seven thousand men who have not bowed the knee to Baal.” (Romans 11:1-4)

Throughout the book of Romans, Paul’s main message is to help people understand the gospel of Jesus Christ. One of the main points of emphasis in Paul’s explanation of the gospel is that people can only be saved by Jesus Christ and not by works. In Romans 10 Paul said:

For Christ is the end of the law for righteousness to everyone who believes.” (Romans 10:4)

“ . . . if you confess with your mouth that Jesus is Lord and believe in your heart that God raised him from the dead, you will be saved. 10 For with the heart one believes and is justified, and with the mouth one confesses and is saved. 11 For the Scripture says, “Everyone who believes in him will not be put to shame.” 12 For there is no distinction between Jew and Greek; for the same Lord is Lord of all, bestowing his riches on all who call on him. 13 For “everyone who calls on the name of the Lord will be saved.” (Romans 10:9-13)

Being a gentile myself, when I hear that there “is no distinction between Jew and Greek; for the same Lord is Lord of all, bestowing his riches on all who call on him. For ‘everyone who calls on the name of the Lord will be saved,’” all I hear is inclusivity. What could be bad about statements like this?

If I was to put myself in the shoes of a Jew reading Paul’s words, however,  I might feel differently. Israel had been God’s chosen people, so when they hear about all people being able to be saved, some of them might feel rejected by God. When Paul says that we are saved by grace and not by the Mosaic Law, this could sound like a rejection of all those people who were holding to the Mosaic law.

Christianity does not claim that all people will be saved. It does claim, however, that Jesus came to save all types of people. No one is a Christian because of their race, gender, ethnicity, economics, nationality, or personal morality.

For the Scripture says, ‘Everyone who believes in him will not be put to shame.’ 12 For there is no distinction between Jew and Greek; for the same Lord is Lord of all, bestowing his riches on all who call on him. 13 For ‘everyone who calls on the name of the Lord will be saved.’” (Romans 10:11-13)

Paul says Romans 11:1, “I ask, then, has God rejected his people? By no means! For I myself am an Israelite, a descendant of Abraham, a member of the tribe of Benjamin.” In other words, Paul is making the point that he is not saying that Jews are excluded from the gospel because he himself is a Jew. How could he preach a way of salvation by which he himself would not be qualified?

It is the most absurd thing in the world for any human to tell another human why they cannot be a Christian. For Christians to try to keep other people out of Christianity based on race, gender, or any other reasons is completely contradictory. Why? Because all Christians became Christians. None of us have been Christians forever. Just as Paul was a Jew and now a Christian, we were all unsaved before we were saved. Christians should be the most open and accepting people because God has first accepted them. God did not invite us into the family because of our race, our social status, our finances, or because of how smart we are. God brought us into the family despite our many sins. Christians are not called to love sin but we are called to love sinners as God has loved us.

God Does Not Saver Everyone. But He Does Save Everyone (Who Is Saved) the Same Way – By Grace

So too at the present time there is a remnant, chosen by grace. 6 But if it is by grace, it is no longer on the basis of works; otherwise grace would no longer be grace.” (Romans 11:5-6)

Christianity is inclusive to all people but it is exclusive to all means of salvation. There is only one path to salvation for all people – God’s grace found in Jesus Christ. People are saved through Christ alone, through faith alone, by grace, and for God’s glory alone. We know this because the Scriptures alone hold the truth about salvation, “For the Scripture says, ‘Everyone who believes in him will not be put to shame’” (Romans 10:13).

Everyone” means everyone. But what must “everyone” do? They must all believe in “him.” The one path to salvation is available to everyone. But there really is only one path. American society today wants to bring unity by saying everyone’s way is right. Modern America does not want to change people; rather, it wants to change the idea of God. It says that we will all be unified through having no absolute standards.

For those whom he foreknew he also predestined to be conformed to the image of his Son, in order that he might be the firstborn among many brothers.” (Romans 8:29)

“Do not be conformed to this world, but be transformed by the renewal of your mind, that by testing you may discern what is the will of God, what is good and acceptable and perfect.” (Romans 12:2)

So God will not save everyone. But those who he saves he always saves by only one way – through Jesus Christ alone.

God Does Not Hate the Unsaved. But the Unsaved Hate God. Therefore God Will Not Save Everyone

7 What then? Israel failed to obtain what it was seeking. The elect obtained it, but the rest were hardened, 8 as it is written, “God gave them a spirit of stupor, eyes that would not see and ears that would not hear, down to this very day.” 9 And David says, “Let their table become a snare and a trap, a stumbling block and a retribution for them; 10 let their eyes be darkened so that they cannot see, and bend their backs forever.”

Therefore God gave them up in the lusts of their hearts to impurity, to the dishonoring of their bodies among themselves, 25 because they exchanged the truth about God for a lie and worshiped and served the creature rather than the Creator, who is blessed forever! Amen.”

There has never been an example in the Bible where someone was living righteously and then God caused them to live sinfully. So when it says “God gave them a spirit of stupor” this means God gave them over to their sinfulness. He did not cause them to be sinful and defiant but he does allow them to be.

So in summary, God loves the world (John 3:16) but the world does not love him. Therefore God will not save everyone.