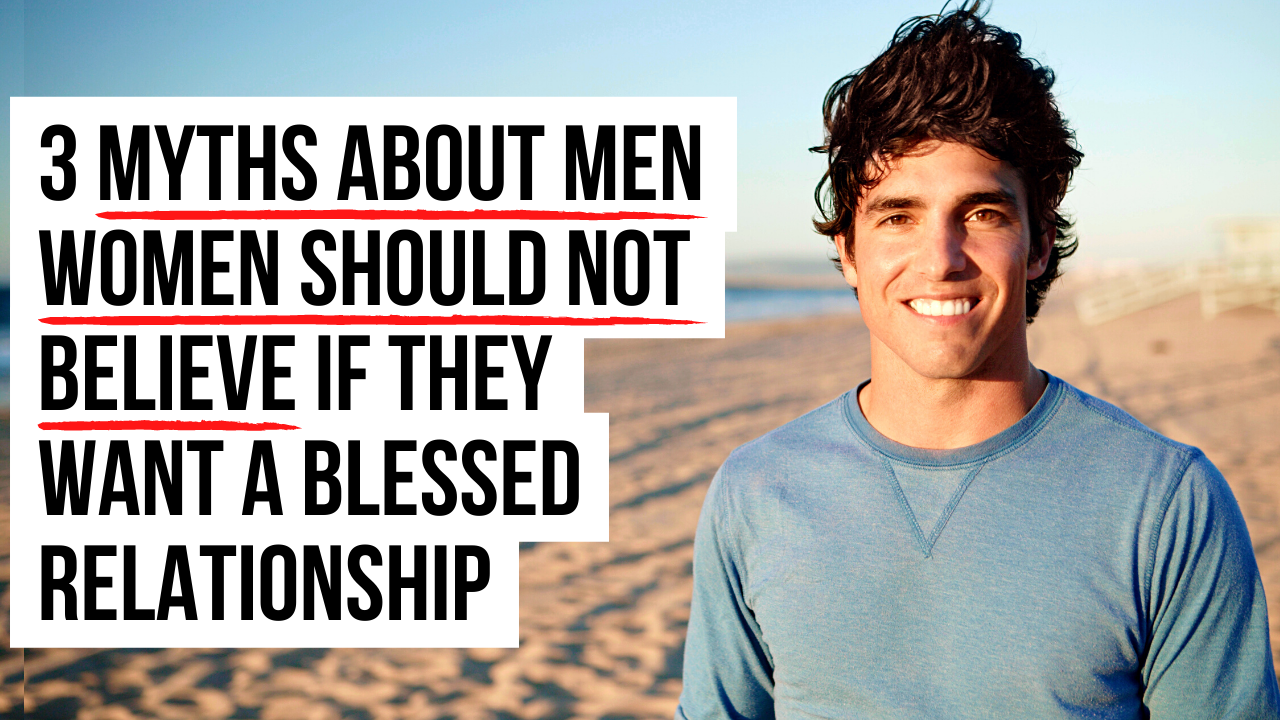 If you are a Christian woman who wants a good relationship with a man one day, here are 3 myths you should not believe about men.

When a woman believes this myth, it hinders her from understanding the biblical reason for why most men desire sex.

Do most husbands have a stronger sex drive than most wives? Yes, that is true. But that doesn’t mean all men just want sex and if you just give them that they will be happy.

Any woman who has fallen for this lie in the dating game knows how untrue this is. If men really just wanted sex, they would stay with you after you gave them sex because they would be happy with you. But sinful men move on after you give them sex because they are searching for something more. It’s true that many men think they just want sex which is why they keep chasing it. But they are always disappointed and always continue the search with a new woman because sex will never satisfy the true craving they are actually trying to satisfy. While the world of single men certainly do appear to just want sex in dating, really their longing for sex is simply a sinful expression of a deeper longing for love.

Likewise, many men really do crave sex but that’s not really what they want. What they really want is to feel loved and one way God designed a husband to feel loved by his wife is through sex in marriage. Men are not just mindless sex addicts who only care about one thing.

Certainly some men have sexual addictions and have idolized sex. But overall, men, just like women, want to give love and feel loved. And sex is one important way God designed many men to experience this in marriage.

When a woman believes this myth, it hinders her from connecting well with a man because the Bible teaches us we are all unique and deserve to be treated as complex individuals.

I do think it can be helpful at times to speak in generalities when it comes to the differences of men and women. But to press these generalities too far leads to an oversimplification of each individual (Psalm 139:14).

You have to realize that what you think men are like may not be what a specific man is actually like. Perhaps you thought all men are the strong silent type. But this man may be very expressive. His love language may be words of affirmation. Therefore he may want to say a lot to you and may need you to listen. Or he may need you to verbally affirm your love for him. Another man may be that strong silent type. His love language may be quality time. He may get overwhelmed with lots of words but he will really want to just be near you without talking all the time.

Notice in 1 Corinthians 12:4-11, when it comes to spiritual gifts, how different God treats us all:

Likewise, remember to treat each man as the unique individual he is. The world will try to force feed you all kinds of generalities about men. Some may be true of some men, but every guy is different so if you want to have a good relationship, make sure you get to know this man without assuming he’s a certain way just because he’s a man.

When a woman believes this myth, she will be tempted to deprive the man of the respect the Bible tells us that he craves.

Culture likes to portray men as idiots. Women are portrayed as the smart and sophisticated ones in the relationship who keep everything together while the men are portrayed like big children who can’t do anything right. Men are viewed as simpleminded.

But Proverbs 20:5 states, “The purpose in a man’s heart is like deep water, but a man of understanding will draw it out.” All humans are complex. We all have deep desires, men included. Don’t fall for the lie that culture is trying to feed you as a woman.

Men are not idiots without feelings. Certainly some men are not verbally expressive, so respect that about him and don’t try to force him to be chatty if that’s just not who he is. But just know he’s not simple minded. He will resent you if you treat him that way. But if you learn to respect him and you learn to understand his heart in the ways that he is expressing himself, you will have a good relationship with a man one day.