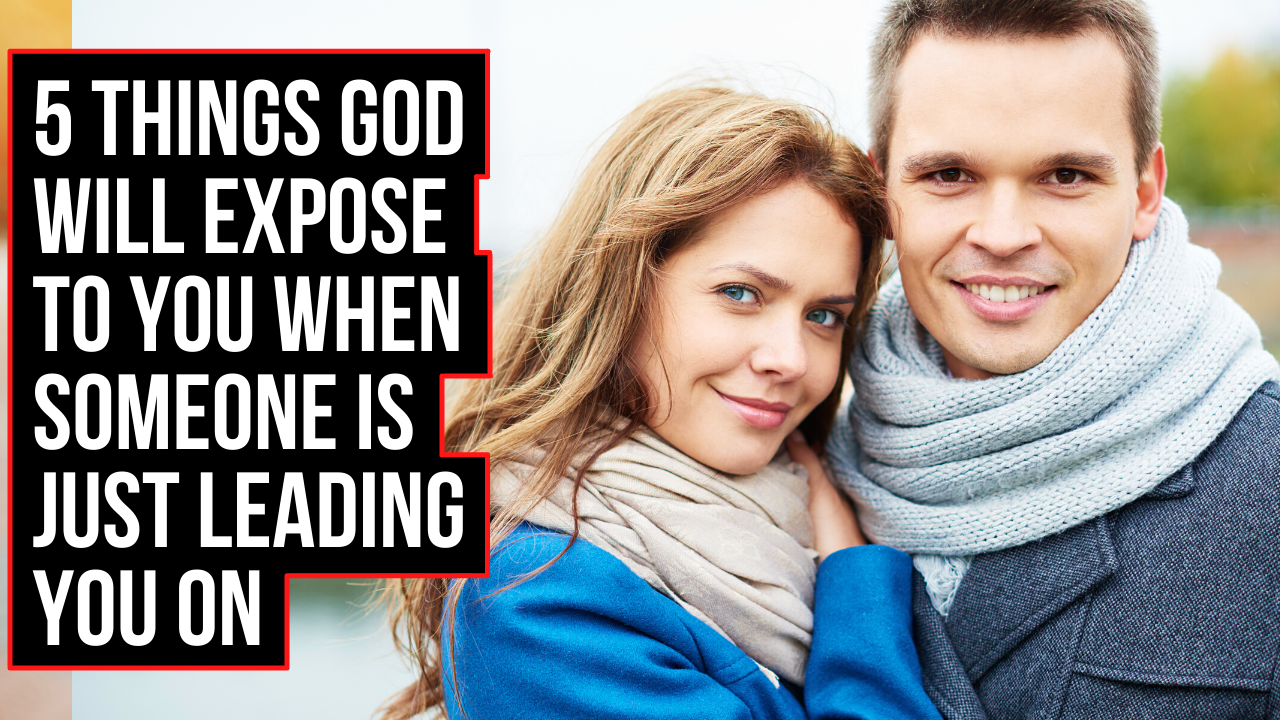 Here are 5 ways in which God can warn you that someone is just leading you on.

Some people love to be liked but they hate to be loved. Being liked can fill your ego and make you satisfied with yourself. But being loved requires you to be vulnerable with someone because they are wanting to be a part of your life for a long time and in a deep way. You can hide your true self from people who like you. But when someone actually loves you, they aren’t going to stop until they know the real you.

Psalm 27:21 (NLT) says, “Fire tests the purity of silver and gold, but a person is tested by being praised.” When you begin to share your true affection for this person, you will then be able to tell how serious they really are.

A lot of people ask me about the biblical rules for actually getting married. Is a ceremony required? If you are married by the state without the church involved, does God recognize this as a marriage? Questions like these can be confusing because there is not a rule in the Bible about how a man and woman can become a husband and wife.

I bring that up because it’s a relationship principle that the more public a commitment is the more serious that commitment is. Thus, when someone is not serious about you, they will do whatever they can to keep your connection as private as possible. When someone is just leading you on, they will be uncomfortable when other people start noticing you as a couple. They will either avoid this from happening or they will start to pull away from you once other people begin to take notice of you both spending time together.

One classic sign of someone who is leading you on is when their interest in you seems to only heighten when they are feeling bad about themselves.

There’s nothing wrong with feeling flattered if someone likes you. It’s natural to feel complimented by someone when they express interest in you even if you know you don’t like that person. Problems arise, however, when we start to seek out this attention from people we know we don’t like just so we can feel good about ourselves when they begin to like us.

Usually people do this when they get rejected by the person they do really like or they begin to feel lonely because they have been single for longer than they want. If someone only pays you attention when they need an ego boost, just know they are leading you on (Romans 2:29).

Some people get addicted to the chase. Immature men particularly enjoy the feeling of having won a woman. But once they know that they could date this woman if they wanted to, they then lose interest because what they really want is just that feeling of having achieved a victory.

Immature women, however, often struggle with wanting a man to want her even if they know they will not accept the man’s offer to date. Once they know the man wants to pursue her and win her, that is often satisfying enough and then the woman will move on because she knows she’s mastered the man through getting him to like her.

But a mature Christian man and a mature Christian woman won’t get addicted to the highs of the pre-dating phase of relationships. Rather than regularly leading people right up to the point of dating and then disappointing them, a godly man and woman will try to limit these types of experiences whenever possible.

As Proverbs 25:14 states, “Like clouds and wind without rain is a man who boasts of a gift he does not give.” This is similar to those people who promise the gift of dating but never deliver on anything more than the false hope in the pre-dating phases.

Showing interest through signs and non-verbal cues can be helpful early on in the relationship process. It’s unwise to go up to someone you barely know and tell them you are romantically interested in them and want to date them. It’s unwise because you don’t know that much about them yet, and thus you are making this decision based upon superficial information.

However, it’s often difficult to gain more information about someone if you don’t express some level of interest that lets this person know they should open up more to you so you both can see if there is mutual romantic interest. And so in the beginning of a connection, the man and woman should do little things to let each other know there is some interest without having a full-blown “define the relationship” talk about their relationship expectations and commitment desires.

With that said, eventually this season of ambiguity needs to end. Proverbs 25:11 states, “A word fitly spoken is like apples of gold in a setting of silver.” This is what it’s like when a man and woman express clear interest in each other after a healthy season of feeling each other out. Their words of clarity then fit the occasion. But Proverbs 25:20 (NIV) states, “Like one who takes away a garment on a cold day, or like vinegar poured on a wound, is one who sings songs to a heavy heart.” Someone who is just leading you on will wear out the season of subtle signs and then their lack of clarity will begin to feel like a song that doesn’t fit the occasion.