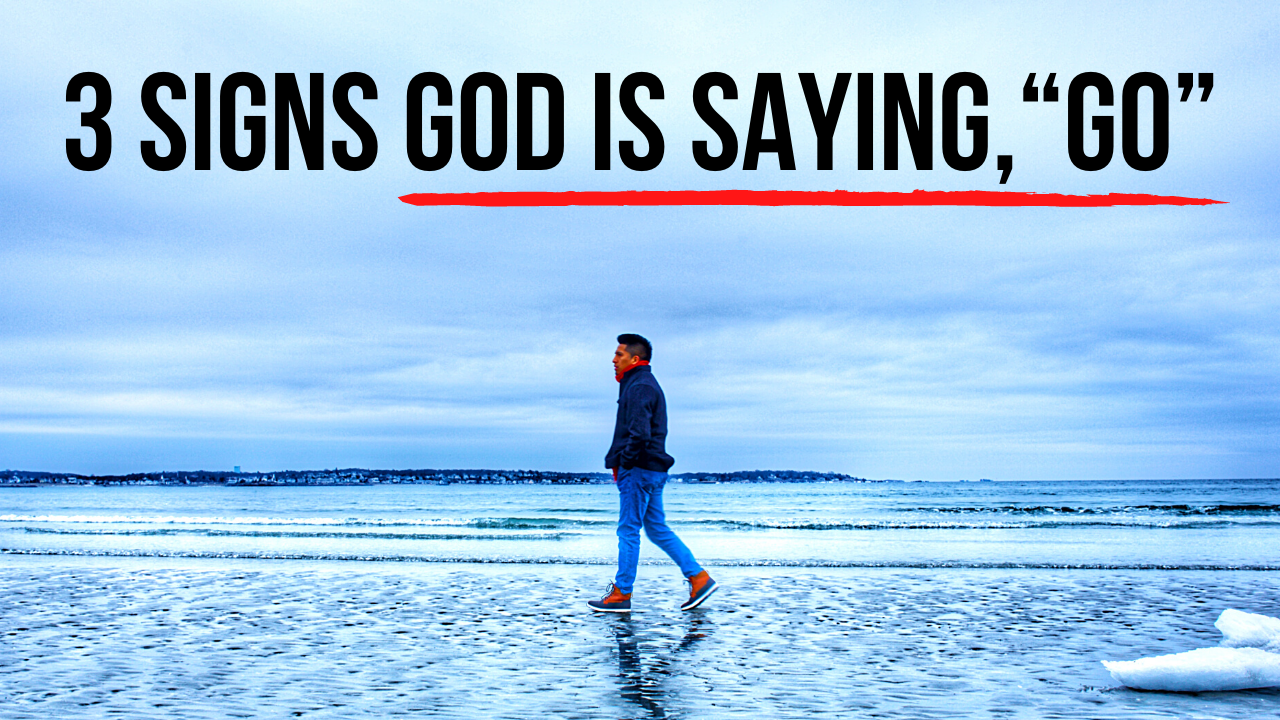 Here are 3 common signs God will show you when he is saying “go” to you.

1. If the Door Has Been Open but You Are Delaying Because You Want to Know What Lies Beyond the Door, This Is Often a Sign God Is Saying, “Go”

One of the easiest ways to know if God is saying no to something is when he shuts the doors in your life that would need to be open if he was saying yes.

For example, if God was saying yes to you about a certain relationship you were praying about, that person would have mutual feelings for you and you would both want to have a biblical relationship together. But if God closes that door by showing you this person does not want a relationship with you or just wants a sinful relationship and not a biblical one, this closed door is a clear sign God is saying no to this relationship.

But one common mistake that often happens even when God is opening a door to you is that we can get stuck looking at that open door because we want to know what lies beyond that door. So going back to the relationship example, perhaps God has opened a door for you with someone who seems like a godly person who likes you and who you also like; but now you are waiting to enter into a dating relationship because you are asking God to reveal if you two will get married one day. You are waiting to walk through the open door to date because you want to see if there will be an open door to marry one day.

Oftentimes, however, God will not reveal that information to you unless you walk through the first door. God will show you what to do next once you do what he has shown you to do now. Notice the warnings Jesus gave about the unknowns that will come when we choose to follow him. In Luke 9:57-58, it states:

As they were going along the road, someone said to him, ‘I will follow you wherever you go.’ And Jesus said to him, ‘Foxes have holes, and birds of the air have nests, but the Son of Man has nowhere to lay his head.’”

Jesus was not telling the man not to follow him. He was simply pointing out that if you want to follow Jesus, you will need to go forward with him even when you don’t know all that will happen next. This is not a call to be unwise and to blindly do whatever you want, just hoping for the best. It’s just means that we must follow Jesus where he tells us to without needing to know the entire future.

So if the delay is because there is an open door but you are not walking through it because you want to know too much about the distant future, oftentimes the Lord is telling you to “go” forward so he can then give you more information as you walk with him.

2. If There Is an Absence of Any Signs God Is Saying “Stop” and You Want to Go Forward for Good Reasons, This Is Often a Sign the Lord Is Saying, “Go”

When we only make the choice to go forward when God makes it abundantly clear that we should go forward, oftentimes we will get stuck. Why? Because while the desire to always get a yes from God about everything is a good desire, this is not actually how God designed every aspect of life to work.

For example, there are many important topics in this world that God neither condones nor condemns. When God speaks about something it’s clear what we should do. But there are times when the Bible is just silent about a topic. The modern form of dating we practice is a great example of this. God does not command people to date before getting married nor does he condemn the practice of dating.

When God is not giving you a “no” or a “stop” and you have a good desire to do something, oftentimes this is a sign in itself that God is saying “go.” If God really doesn’t want you to do something, he will make that clear through showing you a biblical command forbidding what you want to do or giving you a strong conviction not to do that in your heart through the Holy Spirit.

But if no command is in the Bible forbidding this and your heart is free from any conviction by the Holy Spirit and what you want to do is good, then usually this means you should proceed forward. For example, there is no biblical law telling you not to switch jobs. And sometimes you won’t sense a strong yes but you also will not sense the Holy Spirit saying no. If you have a job opportunity somewhere else that pays better, would utilize your skills better, and you are excited to give it a try, oftentimes this means you should go forward.

Psalm 111:10 states, “The fear of the Lord is the beginning of wisdom; all those who practice it have a good understanding. His praise endures forever!” God has given you a free will and personal desires. Fearing God does not mean you always wait for supernatural signs so you can do exactly what God says through those signs. Fearing God is often expressed through first making sure you are not breaking any of God’s commands by proceeding forward.

Sometimes staying in God’s will is less like following a detailed map with many step-by-step instructions like “Go 4 steps forward, then take 2 steps to the left, and then go 5 steps forward.” Sometimes staying in God’s will is more like heading north. How you go north is up to you but as long as you are going north God is fine with how you get there.

While God often does clearly say “go” to us, sometimes the absence of any clear “no” or “stop” is a sign in itself that you should proceed forward.

3. If Going Forward Is What Is Needed to Obey God’s Commands, This Is the Clearest Sign God Is Saying, “Go”

Therefore, if waiting is causing you to not do something you know God wants you to do, this is a sign God is saying “go.”