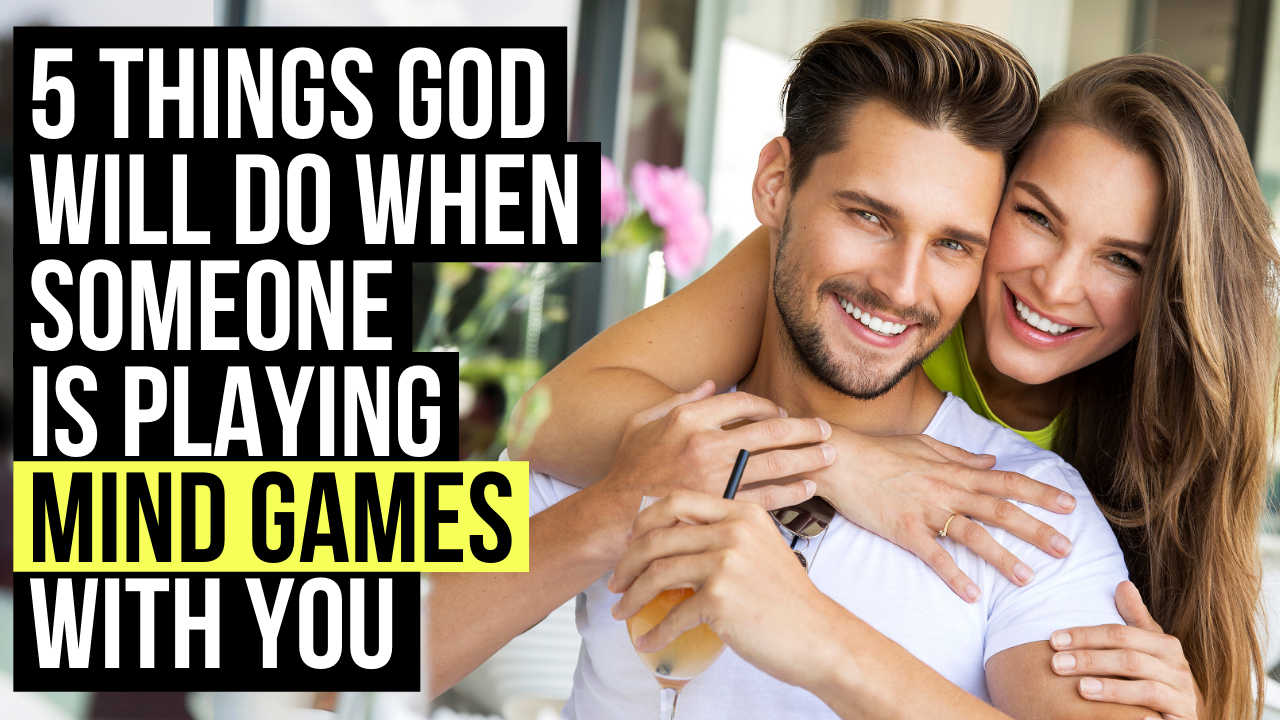 Here are 5 things God will show you when someone is just playing mind games with you.

1. If They Are Insinuating that You Should Wait for Them Even Though They Clearly Told You They Don’t Want to Be with You Right Now, This Is a Sign They Are Playing Mind Games

People who play mind games like to cloak their immaturity in actions that seem mature. For example, sometimes a man or woman will be talking to another single person and things seem to be headed towards dating. But then all of a sudden, they tell this other person they are just not ready for a relationship and they tell this person very clearly that they don’t have those types of feelings for him or her. This looks like a mature thing to do.

But this act of maturity and bravery to tell the truth to this other person is undermined with little phrase like, “I don’t know what will happen in the future. You are the type of person I could see myself with. Just not right now.” This then leaves the other person with a clear message that nothing is going to happen now but it could happen later. Usually this person who said this then totally moves on or dabbles in friendship with this other person while this other person is left wondering what they should do.

This is an immature thing to do for a variety of reasons. First, a mature person will know God does not want them in a relationship before they start connecting with someone and working towards a relationship. You don’t need to know if you want to marry the person you are talking to. But you should not be talking to someone and then realize God doesn’t want you in any relationship. The “It’s not you, it’s God” excuse is common amongst immature Christians who want to connect without wanting to commit.

2. If They Are Sharing Their Feelings for You Along with Their Fears About You, This Is Often a Sign They Are Playing Mind Games

As the popular saying goes, “Hurt people hurt people.” When someone is wounded and has lots of fears, they end up playing mind games with other people because their fears are causing them to play mind games with themselves.

It’s fine if someone has those concerns, but there is no point to then share how they also want to be in a relationship with that person. Someone is playing mind games when they give backhanded compliments, sharing positives right along with a lot of negatives so that in the end you have no idea where this person stands with you.

People who play these types of mind games are not following the counsel of Jesus in Matthew 7:3, “Why do you see the speck that is in your brother’s eye, but do not notice the log that is in your own eye?” Ironically, when people point out what they like in you while also pointing out their concerns, they are showing that their judgement is on you rather than on themselves.

3. If They Want to Be Close Friends Even Though They Know You Want to Be More Than Friends, This Is Often a Sign They Are Playing Mind Games with You

And this is good in my view. Friendship is a great foundation for romance. I also don’t even believe it’s an issue when only one friend likes the other friend as more than friend. This happens all the time. The issue occurs when both friends know one person likes the other person as more than a friend but they just keep being really close friends anyways. This causes one person to get led on and left in the dust when that other person gets into a relationship with someone else and then their friendship changes anyways.

So if someone knows a close friend likes them but they just keep letting the friendship grow more and more intimate even though they know they will never date this other person, this is a sign of mind games. As Philippians 2:3-4 states, “Do nothing from selfish ambition or conceit, but in humility count others more significant than yourselves. Let each of you look not only to his own interests, but also to the interests of others.”

4. If They Talk About Their Feelings for Other People But Also Are Trying to Emotionally Connect with You, This Is a Sign They Are Playing Mind Games with You

One common mind game players do is that they try to emotionally connect with you and send you all kinds of signs that they like you as more than a friend, but then they make little comments about how they like someone else or how they are attracted to some other single person.

This then sets you back and makes you question what their intentions are for you. They are acting like they like. They are calling and texting. But then they also tell you how they like these other women or men. So what gives?

Oftentimes players try to keep you off balance because once they make their strike to use you, you are less secure to resist them. When you really like someone but you are unsure if they like you, you might do something desperate to capitalize on your chance with them if they do show interest in you one day.

Look for someone who doesn’t confuse you whenever you talk to them. If you walk away wondering what the heck just happened every time you speak with someone, this is often a sign they are trying to play mind games. Look for someone who has the qualities of a Timothy. As Paul said in Philippians 2:20-21, “For I have no one like him, who will be genuinely concerned for your welfare. For they all seek their own interests, not those of Jesus Christ.”

5. If They Blame You for How You Make Them Feel, This Is a Sign They Are Playing Mind Games with You

It’s never a good sign when someone consistently blames you for how they feel. Yes, sometimes in relationships we need to share how certain words or actions are hurting our feelings. But sometimes people’s feelings are out of control with or without you in their life, but then they try to blame their feelings on you.

Ultimately we are all responsible for our own reactions to other people. Even if you are being as kind as possible, it’s possible that person will react to you in negative ways and assume the worst. They will then play mind games with you and make you feel like you did something wrong even though their negative emotions and fears really don’t have anything to do with you. As James 1:14-15 explains, “But each person is tempted when he is lured and enticed by his own desire. Then desire when it has conceived gives birth to sin, and sin when it is fully grown brings forth death.”

If you keep triggering someone and they keep blaming you, it’s best to move on and accept this person will keep playing mind games.