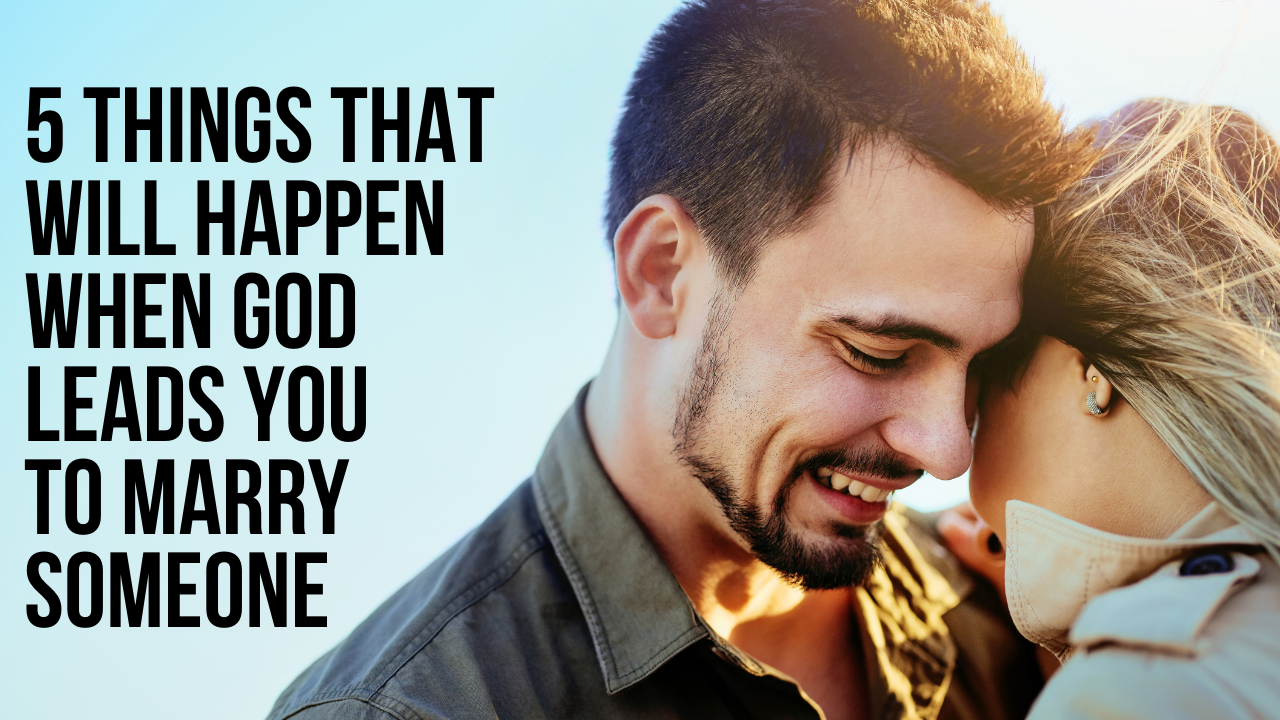 Here are 5 common things that will happen in your life when God is leading you to marry someone.

1. When God Is Leading You to Marry Someone, He Will Let You Know You Are Prepared to Marry Before This Person Even Enters the Equation

God won’t tell you to marry someone if you are not prepared for marriage in general. While each relationship between a husband and wife is unique, biblically speaking there are also certain qualities all godly relationships possess.

As Jesus said in John 15:5, “I am the vine; you are the branches. Whoever abides in me and I in him, he it is that bears much fruit, for apart from me you can do nothing.” Abiding in a relationship with someone is not what will cause spiritual fruit in your life. Only abiding in Christ will accomplish that.

So before God leads you to marry an individual, God will first prepare your heart to be a successful husband or wife in marriage regardless of who your spouse is. Yes, if you want to glorify God in marriage one day it’s very important to marry a godly person so you can form a holy partnership. But before that you must mature into the type of Christian with the qualities necessary to glorify God in the role he will have you play as a wife or a husband.

2. God Will Reveal that You Should Marry This Person in a Progressive Way as You Go Through Wise Relationship Steps Together

Most people want God to say, “Yes, I want you to marry that person.” But in reality God rarely does that until much later on in the relationship.

Eventually, when God gives you the final “Yes, I want you to marry this person,” these words will also be accompanied by facts in the relationship that confirm God is truly saying yes to this. As Philippians 1:6 explains, “And I am sure of this, that he who began a good work in you will bring it to completion at the day of Jesus Christ.” This verse is talking about our salvation and sanctification as we walk with God. But the principle of progressiveness applies to other aspects of life too. When God wants something big for you, he will lead you to receive it by taking many small steps towards it.

So when God leads you to marry someone, this will have followed God already having led you to take wise relationship steps that have helped you gather tangible evidence that you two should proceed into marriage.

3. When God Is Leading You to Marry Someone, He Will Reveal This to You in Multiple Ways

One of the most common mistakes I have seen Christian singles make over the years is that they cling tightly to only one “sign” they believe they have received about someone. For example, perhaps you had a dream about marrying someone. Perhaps someone claimed to speak prophetic words over you that promised you would marry a certain person. Or perhaps you just feel that God told you during your prayer time that you will marry this certain person.

I believe in the biblical principle that the bigger the decision God is leading you to make, the more confirmation God will give you to make it. So don’t expect super clear confirmation in twenty different ways if you are asking God if you should go out to coffee with someone because in the big scheme of things, that’s not a huge decision. A simple feeling of confirmation in prayer would suffice for that type of decision.

But if you are asking God about marriage, you should expect God to make this clear to you in many more ways than just feeling that way in your prayer time. Sensing God is saying yes is important, but the bigger the decision the more confirmation God will give you.

Psalm 32:8 states, “I will instruct you and teach you in the way you should go; I will counsel you with my eye upon you.” So we should expect God to guide us in our lives, but this guiding process has layers to it depending on the question at hand. God will speak to us through the circumstances in the relationship, through the Spirit in our hearts, and most clearly through the word of God.

For more on this, you may want to check out my book called The One: How to Know and Trust God’s Sovereign Plan for Your Future Marriage.

4. When God Is Leading You to Marry Someone, He Will Show You that You and This Person Are Prepared to Reflect Christ and His Church

Whenever you want to know what God wants, you must go to his word. While God does speak to us personally through his Spirit and through the circumstances of life, his will for us is most concretely seen on the pages of Scripture.

The Bible says a lot about marriage, but one core message about marriage is found in Ephesians 5:21-33. Here we see what God wants a Christian husband and wife to do in marriage. But we also learn why God wants them to do these things, “This mystery is profound, and I am saying that it refers to Christ and the church” (Ephesians 5:32).

Sometimes to know what God wants you to do, you also need to look at why God wants you to do certain things. If God has called you to get married one day, his reason for that is so that you and your future spouse can reflect Christ and the church to the world. If marrying someone would not accomplish this goal, God is not calling you to marry that person.

5. When God Leads You to Marry Someone, the Reality of the Relationship Will Not Be Inferior to Your Internal View of This Relationship

When someone thinks they will marry someone but then it doesn’t happen, what usually occurred was that this person’s internal view of this relationship exceeded the reality of the relationship. It’s easy to imagine a future with someone while lacking the necessary factors in the present that would lead to a future with that person.

As Christians, however, we must become experts at having sober thoughts that accurately reflect what is truly happening in our lives. For as 1 Peter 1:13 explains, “Therefore, preparing your minds for action, and being sober-minded, set your hope fully on the grace that will be brought to you at the revelation of Jesus Christ.” When we focus on Christ, he teaches us to pair our thoughts with actions and to be “sober-minded.”