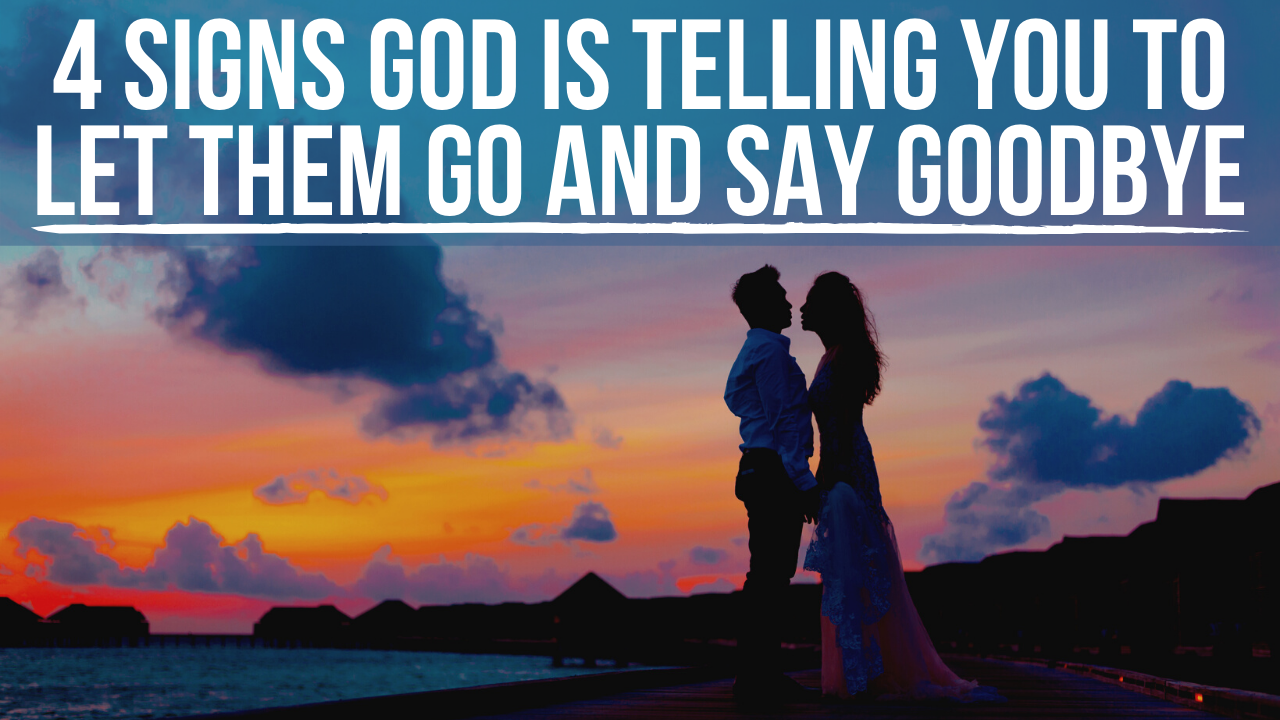 Here are 4 common ways God will communicate to you that it’s time to let someone go and say goodbye to them.

1. If This Relationship Has Served Its Purpose in Both of Your Lives and Now It Is Fruitless, This Is a Sign God Wants You to Let Them Go and Say Goodbye

Fruit has stages to its life cycle. At first, a piece fruit must spend time growing on the tree. It’s connection to the branch is strong because of its need for nutrients. But as the fruit ripens and is ready to be eaten, it’s connection to the branch actually weakens so that it comes off easier when picked. And eventually if it is not picked when ripe, that fruit will just fall off the tree and start rotting on the ground.

Many relationships in our lives share a similar life cycle. God brings people into our lives for a specific season and to accomplish a specific purpose. There will be a season with people where you are both greatly benefiting each other. Your connection is strong because you both are getting nutrients from your relationship. But once you have received what God wants you to receive from each other, this will be marked by a weakening connection. You both have served each other well. You are ripe, so to speak, because you received what you needed from each other. It’s time to move on; otherwise, like a piece of fruit that goes unpicked and uneaten when ripe, what you shared will begin to spoil and the relationship will begin to rot.

Some relationships will last a lifetime and some will just a last a season, and that’s okay. Walk with God. He will show you the difference. Sometimes he just brought you and someone else together because you needed each other for a season. Now it’s times to let them go and say goodbye. As Ecclesiastes 3:2 states, there’s “a time to plant, and a time to pluck up what is planted.”

2. If This Person Is the Only Bridge Left to the Life God Told You to Leave Behind, It’s Time to Let This Person Go and Say Goodbye

God tells us to come as we are, but he never wants us to leave as we are. God’s love is not expressed through just accepting us as we are; rather, God expresses his love by changing us for the better. While there is nothing that can separate a Christian from the love of God, God will remove those things from our lives which are trying to separate us from his love.

This is a process. When God begins to sanctify someone, this process involves both letting go and gaining new things. Bit by bit, you will lose pieces of your old life and then God will replace them with something new. Sometimes we take this process very seriously and do a great job except for just one person we let remain in our lives. But the problem with trying to leave your old life but still staying connected to someone who was a part of that past is that they will act like a bridge between you and what you are trying to leave behind. As James 4:4-5 explains:

Do you not know that friendship with the world is enmity with God? Therefore whoever wishes to be a friend of the world makes himself an enemy of God. Or do you suppose it is to no purpose that the Scripture says, ‘He yearns jealously over the spirit that he has made to dwell in us’?”

God is jealous for you. He does not want you connected to what he’s called you to leave behind. If someone is acting like a bridge between your old life and your new life, this is a sign God is telling you it’s time to let them go and say goodbye.

3. If This Person Is Only Staying Because You Are Begging Them to Remain, This Is a Sign God Is Telling You to Let Them Go and Say Goodbye

It can be so hard and painful when someone wants to leave you while you still want to be with them. What’s really dangerous in a situation like this is that oftentimes you might be able to convince them to stay. This is one of the worst things that could happen to you.

If someone wants to leave you but you are somehow getting them to stay a bit longer, what you are really doing is keeping someone in your life who will hurt you. Like a cornered animal, this person will eventually lash out at you in more and more aggressive ways because you will be preventing them from getting what they want.

Even in marriage, Paul told Christians that if they have an unbelieving spouse who wants to go, they should let them go. 1 Corinthians 7:13 and 15 states, “If any woman has a husband who is an unbeliever, and he consents to live with her, she should not divorce him. . . . But if the unbelieving partner separates, let it be so. In such cases the brother or sister is not enslaved. God has called you to peace.”

On a quick side note, many people try to use this passage to justify dating and marrying an unbeliever, but that is not the context of this passage. Many times two unbelievers get married but then in marriage one of them becomes a Christian but the other one does not. This was especially prevalent during Paul’s time because Christianity was just spreading. So 1 Corinthians 7:13-16 is not justification to marry an unbeliever. Rather, it’s advice for someone who became a Christian and is now married to an unbeliever.

In fact, rather than promoting an unequally yoked relationship, this passage shows how much God wants his people to be separate from unbelievers. Yes, we are called to love the world and be a light to the world, but we are also called to be separate from them. God wants you to let people go in your life who are running from God themselves. As 2 Corinthians 6:14 states, “Do not be unequally yoked with unbelievers. For what partnership has righteousness with lawlessness? Or what fellowship has light with darkness?”

4. If Letting Them Go and Saying Goodbye Is What Is Needed for You Both to Follow God’s Calling on Your Lives, It’s Time to Obey

Sometimes separation is needed not because of a problem between you and this person but simply because God has given you both different callings. When God calls, you must say your goodbyes and follow him wherever he leads. Notice the powerful example of this in the life of Paul. In Acts 20:24-25, 36-38 it reads:

But I [Paul] do not account my life of any value nor as precious to myself, if only I may finish my course and the ministry that I received from the Lord Jesus, to testify to the gospel of the grace of God. And now, behold, I know that none of you among whom I have gone about proclaiming the kingdom will see my face again.” . . . And when he had said these things, he knelt down and prayed with them all. And there was much weeping on the part of all; they embraced Paul and kissed him, being sorrowful most of all because of the word he had spoken, that they would not see his face again. And they accompanied him to the ship.”

They were sad about their separation. Paul loved these people and these people loved Paul. But they all knew what had to be done. God was calling, and they knew they must obey. So if God is calling you and this person in two different directions, it’s time to let them go and say goodbye.