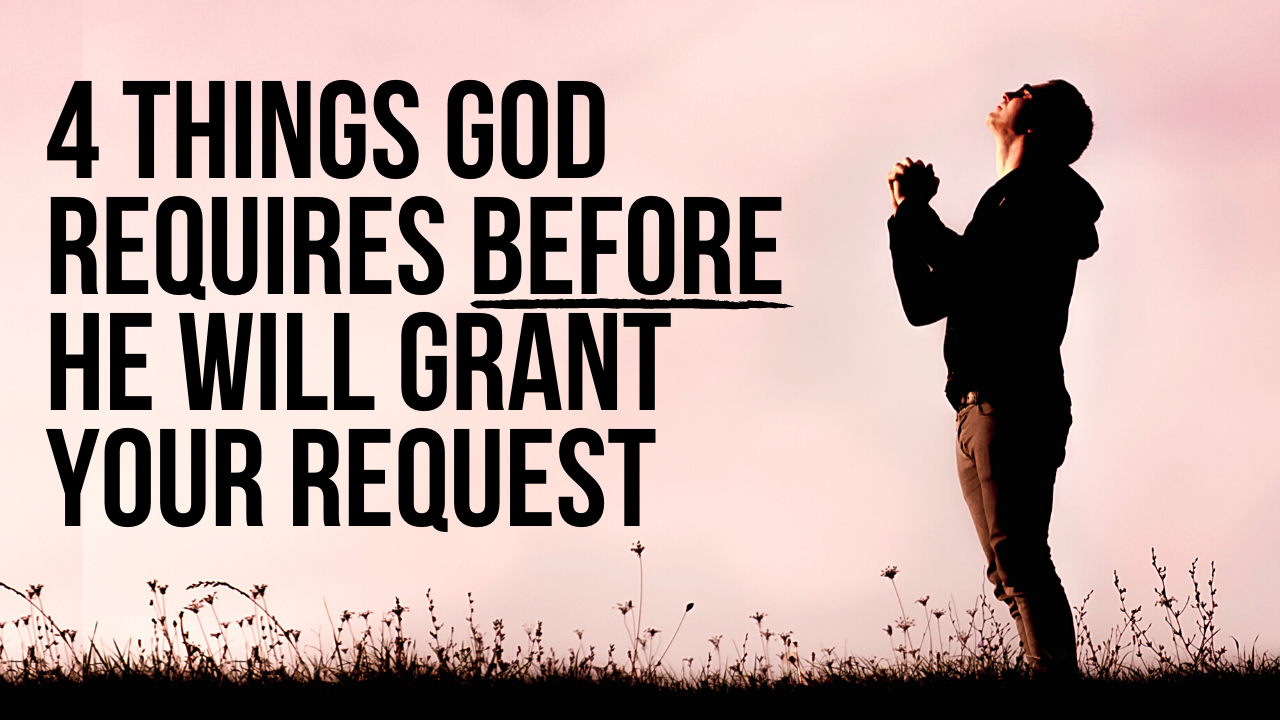 Here are 4 things God requires of you if you have a need you want him to fulfill.

1. Before God Will Grant Your Request, He Requires That You First Boldly Ask Him Even When It Doesn’t Seem Possible

One powerful example of this can be seen in how God provided for Elijah and the poor widow in 1 Kings 17. 1 Kings 17:7-11 states:

Some time later the brook dried up because there had been no rain in the land. Then the word of the Lord came to [Elijah]: ‘Go at once to Zarephath in the region of Sidon and stay there. I have directed a widow there to supply you with food.’ So he went to Zarephath. When he came to the town gate, a widow was there gathering sticks. He called to her and asked, ‘Would you bring me a little water in a jar so I may have a drink?’ As she was going to get it, he called, ‘And bring me, please, a piece of bread.’”

Can you imagine being in Elijah’s place and asking the poorest person you could find to then supply your needs? But this type of thing is not uncommon for God to do. When Moses needed water for the people, God told him to speak to the rock (Numbers 20:8). When you need water, speaking to a rock is the last thing you would do. When Joshua needed to cross the Jordan, God told him to do it during it’s flood season (Joshua 3:15), which is the last time of the year you would try to cross a river. When Jesus wanted to feed the five thousand, he chose the donation of five loaves of bread and two fish by a little boy as the resource he would multiply (John 6:9).

So just as God told Elijah to ask the most unlikely person in town to help him, so too does God require you to ask boldly for what you need even when it seems impossible by earthly standards.

2. Before God Grants Your Request, He Requires Honesty About Your Fears

God requires honesty about our fears because he knows our fears are what is tainting our faith.

Throughout Scripture it’s clear that God can answer any prayer when it is asked in faith. This doesn’t mean he will always give you what you want even when you have the faith to receive it because ultimately if something is not God’s will he will not grant it (1 John 5:14).

So never think all your unanswered prayers are because of a lack of faith. But some could be. This is why we must be honest about our fears if we have a request for God. Notice how God used the widow’s honesty to deal with her fears which then led to her miracle. 1 Kings 17:10-13 says:

Notice that the widow had no issue with bringing Elijah water because that was something she could do in her own strength. She had water, so she could give water. But his request for bread touched on her greatest fears. She knew she only had one meal left for her and her son. In fear, she had the urge to cling to this last bit of food because she feared seeing her son starve.

Like this widow in need who was going to make one more meal for her and her son and then they would starve to death, God asks us to give up that last measly meal so he can then bless us with abundance.

As we will see in the next point, God provided for the woman and her son because she turned to him. Without Elijah asking her to give up everything she had and live by faith in God, she would have just had that one last meal. But because she gave it all to God, he then provided for her meal after meal after meal. If she would have been controlled by her fears and ate her last meal, she would never have received her miracle. As Jesus said, “If you try to hang on to your life, you will lose it. But if you give up your life for my sake, you will save it” (Luke 9:24, NLT).

Likewise, God wants us to be honest about fears so he can remind us we are not the solution to our problems. We will always live in fear when we believe we must provide our needs for ourselves. God will force us to face our fears so we can fully embrace the truth that God is the one who supplies and not us.

3. Before God Will Grant Your Request, He Requires Your Obedience Before You Will See His Results

Faith is not just a feeling that all will turn out okay in the end. Faith is a belief in God’s goodness that is so strong that it causes you to act as those you already have what you cannot yet see. 1 Kings 17:13-16 says:

And Elijah said to her, ‘Do not fear; go home and do as you have said. But first make a small loaf of bread for me from what you have and bring it to me, and then make something for yourself and your son. For this is what the Lord, the God of Israel, says: ‘The jar of flour will not be used up and the jug of oil will not run dry until the day the Lord sends rain on the land.’

She went away and did as Elijah had told her. So there was food every day for Elijah and for the woman and her family. For the jar of flour was not used up and the jug of oil did not run dry, in keeping with the word of the Lord spoken by Elijah.”

He said to her, “But first make a small loaf of bread for me from what you have and bring it to me . . .” This is what God says to us all when we have a need we know we cannot supply for ourselves. Not only does he ask you to trust him to provide, he firsts asks you to give him all that you have before he will then give you all that you need.

The true faith that God requires of us will causes us to obey him before we see the results of our obedience.

4. Before God Will Grant Your Request, He Requires You to Choose the Right Mediator

Ultimately this story of Elijah and the widow is a foreshadowing meant to point us to Christ himself. When you keep reading in 1 Kings 17, the widow’s son actually gets sick and dies. But she turns to Elijah for help. The widow was given what she needed not only because of her faith but also because of Elijah’s request. He was her mediator to God in this instance. 1 Kings 17:22-23 says:

The Lord heard Elijah’s cry, and the boy’s life returned to him, and he lived. Elijah picked up the child and carried him down from the room into the house. He gave him to his mother and said, ‘Look, your son is alive!’”

The widow did not turn to the false gods in her town. She didn’t call the local spell caster. She knew who had access to the one true God (James 5:16-18). As the widow turned to Elijah who then turned to God on her behalf, so too must we seek the right mediator – Jesus Christ. As Jesus said in John 14:12-14, which states:

Truly, truly, I say to you, whoever believes in me will also do the works that I do; and greater works than these will he do, because I am going to the Father. Whatever you ask in my name, this I will do, that the Father may be glorified in the Son. If you ask me anything in my name, I will do it.”