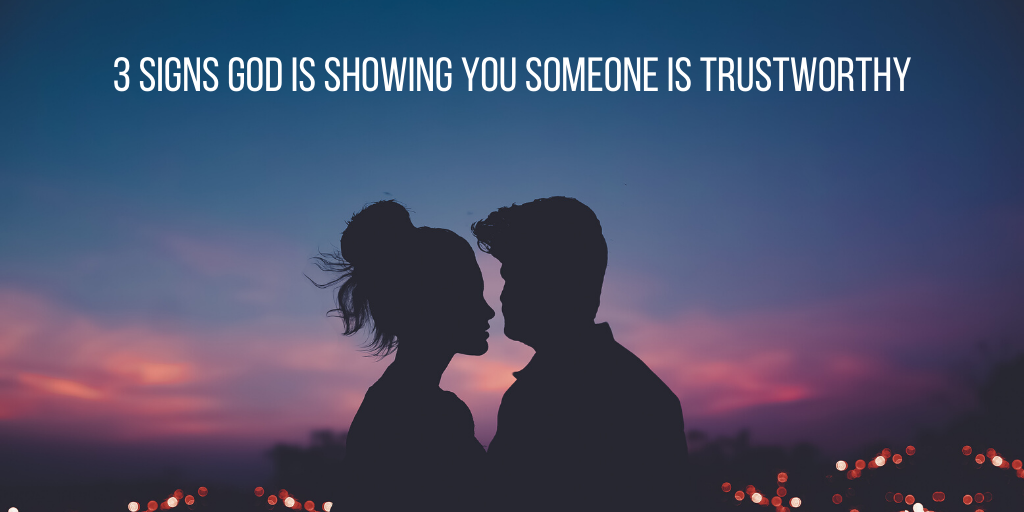 Here are 3 signs God is showing you that someone is trustworthy.

1. If Someone Expresses Their Feelings for You Honestly, This Is a Sign of a Trustworthy Person

You can mislead someone in two ways: by withholding the truth or by telling a lie. In much the same way, when it comes to romantic relationships, an honest person will express themselves in a true and balanced way.

Manipulation in relationships can be achieved either through the withholding of expressed feelings or by overly flattering someone with false love. If someone tries to control you by keeping you desperate because you are unsure of how they feel, this is not a sign of trustworthy person. Sometimes people want the power by being the one who has not expressed interest yet.

It can be similar when negotiating a price with a salesman. A good salesman will wait as long as possible to share the actual price of something because they know once you have the actual price you have the power to make your decision and they can no longer work on you with their sales tactics. Once you know the price you will either buy it or walk away. So the salesperson will wait as long as they can to talk about price so they have more time to sell you on this item and make you want it. A salesman tries to wait as long as possible to share the price because they know once they do they will lose their power over you.

Manipulative and untrustworthy people do this type of thing in relationships too. They either withhold expressing love to control you or they try to butter you up with flattery to try to control you. Proverbs 27:5-6 puts it like this, “Better is open rebuke than hidden love. Faithful are the wounds of a friend; profuse are the kisses of an enemy.”

The first part of this statement is not saying that being rebuked is better than being loved. It is simply pointing out the importance of expressing love rather than hiding love and not expressing it. It’s saying that it feels worse for someone to withhold their love than being openly rebuked.

In the second part of this passage it highlights the dangers of someone who is on the opposite extreme. Rather than not expressing themselves, they flatter you with untrue statements they don’t really mean but they say them anyways because they know that’s what you want to hear. In either case, someone who does this type of thing is not trustworthy.

2. When Someone’s Actions Precede Their Words, This Is a Sign of a Trustworthy Person

In Matthew 21:28-31 Jesus told the hypocritical pharisees a parable to highlight the value of actions over words. It reads:

What do you think? A man had two sons. And he went to the first and said, ‘Son, go and work in the vineyard today.’ And he answered, ‘I will not,’ but afterward he changed his mind and went. And he went to the other son and said the same. And he answered, ‘I go, sir,’ but did not go. Which of the two did the will of his father?” They said, “The first.” Jesus said to them, “Truly, I say to you, the tax collectors and the prostitutes go into the kingdom of God before you.”

For example: A trust worthy man won’t talk about marrying you, he will have the ring in hand and then he will ask you to marry him. A trustworthy woman won’t tell you she’s faithful. She will show you she’s faithful by not flirting with other men and playing games.

3. When Someone Is Honest About Their Own Weaknesses, This Is a Sign of a Trustworthy Person

It’s a mistake for single men and women to use each other like a confessional. Even when you are dating, a boyfriend and girlfriend should not confide in each other to the same level a husband and wife should. So I’m not saying you should look for someone who confesses their every sin to you.

But if you’ve been getting to know someone for awhile and you still have no idea of what they might struggle with, this is actually not a good sign. At first this could seem like a good thing because it might feel like they don’t struggle with much so that’s why you don’t know about any of their weaknesses. But that is never the case. No matter who you are, you have a weakness. As Christians we should never be okay with areas of sin in our lives. We never want to stop repenting in these areas of our lives.

But we also need to be honest with ourselves and realize that we are all more vulnerable to certain types of sin in certain areas of our lives. Some people struggle with pride, anger, lust, anxiety, or fear. Again, you don’t need to know someone’s darkest secret to trust them. But when someone is a trustworthy person, they will be honest about themselves and vulnerable enough to let you know who they really are.

As Galatians 6:2-3 states, “Bear one another’s burdens, and so fulfill the law of Christ. For if anyone thinks he is something, when he is nothing, he deceives himself.”