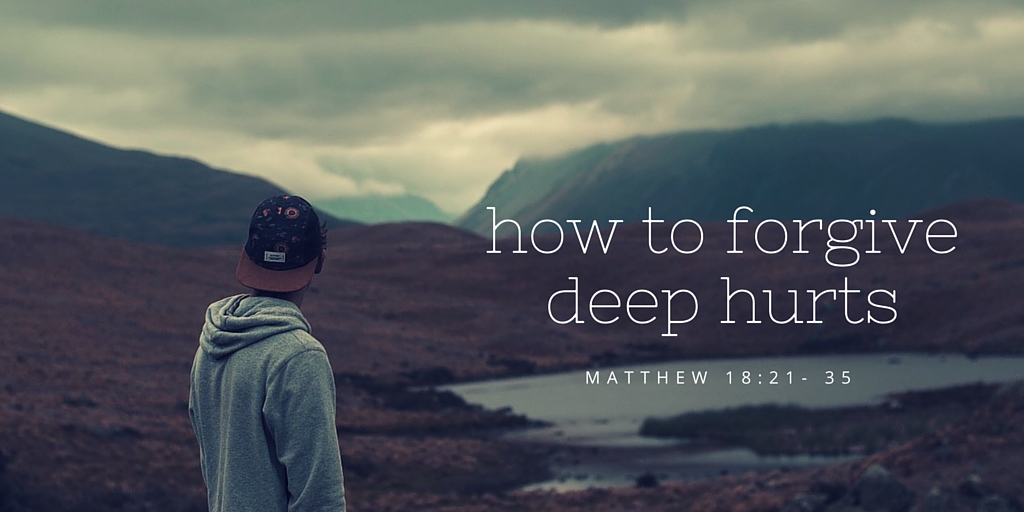 How do you forgive someone who has hurt you deeply? Sadly this is a question every human will have to answer if they hope to keep their heart healthy.

If you have close friends, relatives you love, a spouse, children, or any other significant relationship, the possibility for hurt will never leave and thus forgiveness will always be deeply needed.

Therefore, the first step in forgiving someone who has hurt you deeply is to prepare in advance before the hurt even happens.

Prepare in Advance to Forgive Someone “When” They Hurt You Deeply

It’s interesting how Peter phrases the question in Mathew 18:21, “Lord, how often will my brother sin against me, and I forgive him?” Jesus and Peter’s conversation is not a hypothetical “if” someone sins against you. It’s a factual assumption made clear with the words that our brothers and sisters “will sin” against us. C.S. Lewis states:

The main difference between a healthy friendship and a broken friendship is not that there are less arguments, less stress, or less wrongs. The difference is that one friendship is committed to forgiving the offenses and moving on in love and the other friendship never forgives and thus can never move on.

Church splits don’t happen because members of the church hurt each other, rebel against the pastor, or because of sin. Church splits happen when the people of God are not willing to admit their sins, repent, and are not eager to forgive one another when these things do happen, because eventually they will.

Therefore, to forgive those who have hurt us deeply, we will be much better equipped if we have prepared our hearts before the hurt even occurs, knowing forgiveness will eventually be needed.

Jesus knows from experience that if you want to be happy in your relationships it’s not going to happen by finding perfect people who never let you down.

When Jesus was betrayed by Peter, Jesus didn’t write him off forever and say, “You know . . . I was wrong about you. You’ve really hurt me deeply. I was planning on starting my church with you. But now that you sinned against me, it’s over!” No, before Peter betrayed Jesus, Jesus predicted he would deny him three times. Jesus was already planning on forgiving him before the offense ever took place. Jesus knew the only way he would be able to have a relationship with those he loved would be if he was willing to forgive them often.

And so all this raises the question that Jesus is going to answer for us. If people are going to hurt us deeply, even the people who we love the most, how can we protect ourselves from becoming, as C.S. Lewis said, hard hearted people who never risk being vulnerable? How can we avoid becoming the type of people who protect themselves from hurt by choosing to feel nothing, but in the process they also cut themselves off from feeling love? How are we going to find the motivation to love those who don’t deserve it? How are we to forgive people after we have already forgiven them so many times before?

The answer to “How do you forgive someone who has hurt you deeply?” is found in Matthew 18:33, “Shouldn’t you have had mercy on your fellow servant just as I had on you?” The way you will find the love to forgive those who have hurt you deeply is by basing your love not in the one who wronged you but in the One who has never wronged you – God.

Because we are eager for the full redemption that awaits us even though we don’t deserve it, we should be eager to give this relational redemption to those who are in our debt.

Because We Are Secure in God’s Love, We Can Be Vulnerable to Love and Forgive Those Who Will Hurt Us Deeply

For God’s sake, not for people’s sake, are we to forgive unconditionally as he forgives us unconditionally. Because Jesus was secure in the love of his Father and sought to please him above all else, he was free to forgive even when others did not deserve it. Jesus was able to be vulnerable with the people he knew were going to hurt him deeply because he was so secure in the love of God. This is what he now expects of us.